You ain't seen nothin' yet 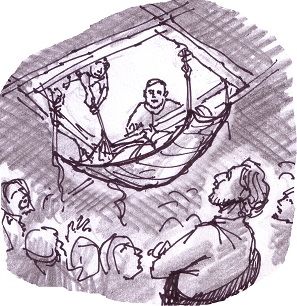 Back in 1974, a Canadian band named “Bachman-Turner Overdrive” released a Rock tune with the staccato chorus line, “B-b-b-baby, you just ain't seen n-n-nothin' yet.” The exuberance of the song captures something of the astonishment the crowd expresses in today’s Gospel when Jesus heals and forgives a paralyzed man who was lowered through the roof of his house. They exclaim, “We have never seen anything like this!”

Jesus returned Capernaum after visiting nearby villages, preaching, healing and driving out evil spirits. People packed into his house to hear his message. Among them were skeptical scribes eager to find cracks in his orthodoxy. Suddenly a paralyzed man is lowered into the room.  The scene is charged with excitement as the crowd waits to see what Jesus will do.  Instead of healing the man, Jesus says, “Child, your sins are forgiven.” The scribes say to themselves, “Now he’s gone too far. Only God can forgive sins.”

The scribes were there to trap Jesus. The exchange that follows posed its own trap as Jesus challenged them to see the unity of God’s forgiveness and human forgiveness as the source of healing. By combining forgiveness and healing,  Jesus affirms that God’s power to forgive sin has been given to people. The name “son of man” was both a messianic title and a generic term for “human being.”  As messiah, Jesus has brought heaven to earth. The Kingdom of God is at hand. Divine power to heal and forgive has been poured out and everyone can now perform them.

People were taught they had to go to the priests, make a sin offering and perform rituals to be forgiven. Jesus knew that most sins occurred in relationships, causing division, hatred and isolation, all forms of paralysis that opened the door to illness and further evil.  People had the power to forgive, be reconciled and to heal the damage they created.  Jesus was taking official religion out of the equation.  No wonder the scribes, whose business it was to be arbiters of God’s mercy, were aghast.  The crowds were astonished by this new teaching.   They had never seen anything like this.

We know our offenses against others can cause suffering. We carry the burden of unresolved hurt in families, the memory of past sins that continue to cause regret and shame.  We pray for healing and do acts of penance, hoping for God’s forgiveness. But what if God is not the one we should direct our remorse to? What if we have the power and the responsibility to give and to seek forgiveness?  The power to heal and forgive lies with us, first by admitting our sins, then, whenever and however it is possible, by pursuing reconciliation, asking for and offering mercy to set everyone free. Those who have had the courage and faith to do this discover an astonishing joy and power they did not know they had.

Column | You ain't seen nothin' yet