With you on the way 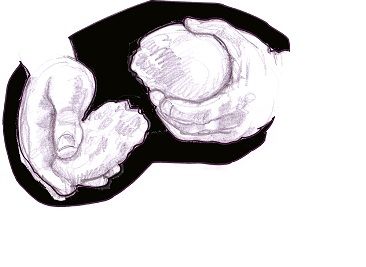 “Were not our hearts burning within us while he spoke to us on the way and opened the Scriptures to us?” (Luke 24:32).

Luke’s story of the two disciples on their way to Emmaus has just enough detail to intrigue scholars about its historicity and the identity of the people mentioned.  Specifically, one disciple is named Cleopas, and this jumps out because in John’s Gospel, one of the women who witnessed the crucifixion of Jesus is also identified as “Mary, the wife of Clopas” (19:25).

Commentators and preachers have speculated on whether the Emmaus pair were husband and wife fleeing Jerusalem after the shocking collapse of all their hopes that Jesus was the promised Messiah.  Whatever can be concluded, Luke takes the Emmaus tradition and fashions a powerful summary of the Easter event and the process of coming to faith by the early Christian community.

Luke describes two believers in despair at the death of Jesus. They are running away from what had been their hope in his message and witness.  But on the way they meet a stranger who revives their faith by showing them how the Scriptures had foretold the necessity of Jesus’ suffering in order to fulfill the Law and the Prophets.

The disciples are brought to faith by reading the Scriptures and by participating in the ritual of the Breaking of the Bread. Their hearts burn within them and their eyes are opened to know Jesus present with them. This fills them with courage, turns the direction of their lives around and propels them back into the world to be witnesses to the risen Christ.

We recognize in this account the liturgy of the early Christian community, the means by which the baptized followers of Jesus were formed in the faith. Luke hands this legacy on to us, for this is how we are called to make the Easter story the inspiration for our own lives as the church. The stranger who accompanies us on the way is the Risen Jesus, both hidden and revealed, present in Word and Sacrament, but also in us and in the poor and those most in need of our compassion and help. We will know his presence when our hearts burn within us. Is this not the synodal path that Pope Francis is inviting the church to recover?

Column | With you on the way

The one thing necessary