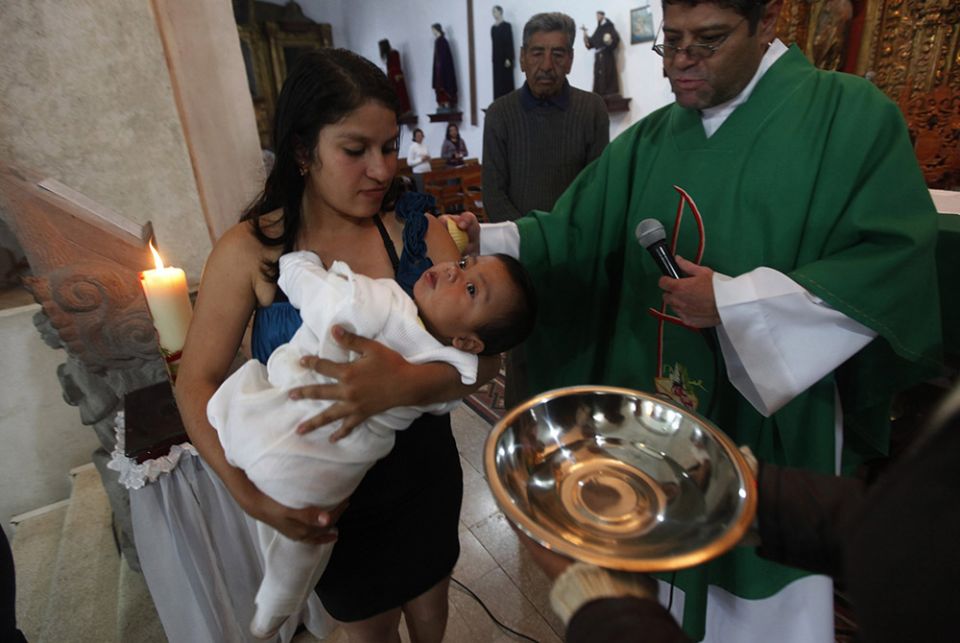 A child is pictured in a file photo being baptized at a church in Mexico City. (CNS/Reuters/Edgard Garrido)

Remember the day of your baptism? It's highly unlikely, but your parents and godparents and an assortment of relatives probably do. Perhaps they remember the event itself, or the party, or something that went wrong. When we were baptized as infants, we were the star of the show, but, unless we were older, we had no clue about what was happening or the commitment the baptism entailed. When it comes to Jesus' baptism by John, the opposite is true: he knew exactly what he was doing and those closest to him were uncomfortable with the memory and played it down.

Among the evangelists, John doesn't even mention Jesus' baptism, Mark openly depicts it, and Matthew qualifies the event by having John protest that Jesus should baptize him. Luke, our guide for this liturgical year, alludes to Jesus' baptism, then spotlights the descent of the Spirit and the divine voice that named Jesus as God's beloved son. For the early Christian community, Jesus' baptism was an embarrassing admission that Jesus began his ministry as one of John's disciples.

The early community's embarrassment about Jesus' relationship to John helps us understand Jesus in his own context. Luke tells us that John's preaching left people filled with expectation. John preached radical conversion. He had set up camp along the Jordan River, a site with enough water for his ceremonies and near a well-traveled trade route that assured a steady flow of people could hear his preaching. Most of all, the site was near Jericho, the place where Joshua had first entered the Promised Land. John preached and baptized from a desert spot from where his converts could cross the river and enter renewed into the life God offered them. John's baptismal rite, unlike people's ordinary ritual washings, had to be received — people did not do it for themselves. This established a unique relationship between John and the baptized, symbolizing their acceptance of his call to radical conversion. Baptism was a public proclamation of commitment.

After the infancy narratives, this is Jesus' first appearance in the Gospel. Jesus' baptism signaled a life-changing decision. If we read the Gospels without imposing later teachings on them, we see that they depict Jesus as a thoroughly human man whose goal was to discern and do God's will and to bring others along with him. We assume that until this time, Jesus had lived as an ordinary craftsman, one more among the inhabitants of Nazareth. Then one day, he joined the tax collectors, soldiers and throngs of ordinary folk going to John. He identified himself with their hopes and needs rather than with the righteous who felt no need for major changes. This, Jesus' first public act, declared his loyalty: He would stand with the people who desired a radical return to God for themselves and their world.

After allowing himself to be baptized, Jesus heard the divine voice say, "You are my beloved Son." Whatever it had taken to get him to that moment, whatever the options he had discarded and doubts he had to overcome, Jesus had received not just a baptism, but an affirmation and a naming. When Luke describes the Spirit and the voice that came to Jesus, the background music is that of the Servant Song of Isaiah 42 in which God says, "Here is my servant, my chosen one upon whom I have put my spirit." That song about God's servant reaffirmed Jesus' choices and set him on a path to serve the neediest of God's people.

We noted that Jesus' followers were reticent to admit that he had been baptized by John. As he continued his mission, some would continue to be embarrassed and even scandalized by the way he enjoyed the company of sinners and portrayed God as always kind and merciful. The people had been full of expectation, but he was not exactly what they expected.

The day of Jesus' baptism might be compared to the day a couple marries, a priest is ordained, or a woman or man religious pronounces their vows. Each of those is an extension of our baptismal call and grace. As on the day of our baptism, we have precious little idea about all that these commitments will call forth, except that they will call us to live radically, losing ourselves in love and serving others in the manner of Jesus.

Today is a good day to renew our baptism and the commitments that have flowed from it. It is always risky to make commitments about an unknown future, but like our Lord, we can trust that the Spirit will lead us to where God will say, "You are my beloved in whom I am well pleased."

Column | The Baptism of the Lord: Be like Jesus, trust the Spirit

I or we? Vatican sparks baptism controversy that isn't so controversial

Faith is passed on at home, pope tells parents at baptism