Fourth Sunday of Easter: In a time of tribulation 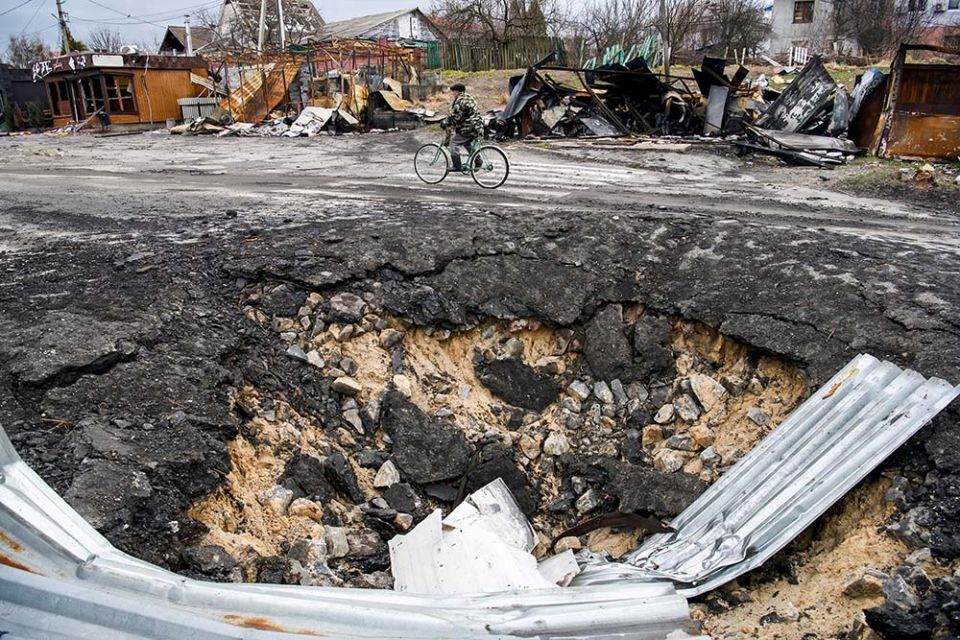 A local resident rides a bicycle past a bomb crater as Russia's attack on Ukraine continues in the village of Demydiv, outside Kyiv, Ukraine, April 6. (CNS/Reuters/Vladyslav Musiienko)

Today's Gospel sounds so simple: "My sheep hear my voice. I know them and they follow me." There are times when it does feel just that clear and easy.

On the other hand, the Book of Revelation tells us that discipleship develops by passing through a time of great "tribulation," and the Acts of the Apostles is full of warnings that faith communities will be tested by internal divisions even as their very character seems to be challenged by new members from every land.

As we celebrate the Easter season, current events may be the signs of the times we need to help us understand these mysteries more deeply than ever before. Let us think about this Easter in the light of the past few years of our history.

First, the country was ravaged by bitter political divisions. While those were raging, we had COVID-19, the pandemic that forced us to realize what it means to be part of a truly global world in which the fate of each affects all. Then, a few months ago, we saw the invasion of Ukraine, a situation many have interpreted through biblical images such as David and Goliath, the massacre of the innocents, or the epic attempt of evil to dominate the world.

Those violent, apocalyptic images make for an interesting contrast with the image of Christ, the good shepherd.

What are these Scriptures telling us today?

First, let's look to Paul and Barnabas on their mission in Greek territory. Their preaching seemed to start innocently enough, urging the mixed crowd of ethnic Jews and converts to remain faithful to God's grace. Ah, but what does faithfulness entail?

For Paul, the Pharisee-convert to Christ, faithfulness implied being open to new revelation — including the revelation that God's choice of people could go beyond Israel. But when the traditional group saw the enthusiasm of the Gentile converts, the warning bells went off: They were sure to be outnumbered and their traditions would be challenged. That could not be right!

In the end, after some bitter exchanges, Paul and Barnabas were exiled, a fate that they construed as a share in the rejection of Christ and an opportunity to continue their mission in a place that might accept it.

After seeing how the apostles contended with rejection, we hear details of John's apocalypse, his vision of the end times. Writing for a people suffering serious persecution and speaking to the others who share their fate throughout history, John uses spectacular imagery to assure them that, just as for Jesus, faithfulness will win out in the end.

To depict his hope, John describes the immeasurable multitude of people from every time, place and tongue who have remained faithful. There are no limits to who can participate in this victory celebration. No matter what they have been through, they now wave peace palms as signs that suffering and conflict have been redeemed and God is there, wiping the tears from their eyes.

With counterintuitive imagery, John tells us that the people who will stand rejoicing in Christ's presence have washed their robes and made them white in the blood of the lamb.

John leads us to understand that washing our robes in the blood of the lamb means joining in Christ's death and resurrection. That's rather easy to say when we think of it as the baptismal ritual of dying and rising with Christ. It's far more challenging when participation in Christ's passion stops being symbolic, when the people are not just the baptized, but persecuted innocents. Under these circumstances, participating in Christ's sacrifice implies believing in God's goodness so much that in the midst of torment we still strive to forgive and love our oppressors.

This offers us a new image of Christ the shepherd who says, "My sheep hear my voice ... they follow me." The shepherd John depicts gave his life in faithfulness, even when he could not envision the final result. He is the one who, as he was dying on the cross, continued to bear witness that no one could take him away from the father and thus no one could put an end to his mission.

Today, in this moment of history, these readings take on a radical character and describe the demanding depth of our Christian vocation. We remember that following our shepherd will lead us where he goes: into the heart of conflict and suffering.

No one would seek that, but when it comes, as it inevitably does, we have a guide whose voice speaks through the myriad who have gone before us and those who listen to him today: "No one has the power to snatch you away." In the end, it's that simple, and not at all easy.

Column | Fourth Sunday of Easter: In a time of tribulation

Gift of the Holy Spirit connects people to Christ, pope says at audience

Holding my grandbaby, I experienced the miracle of life