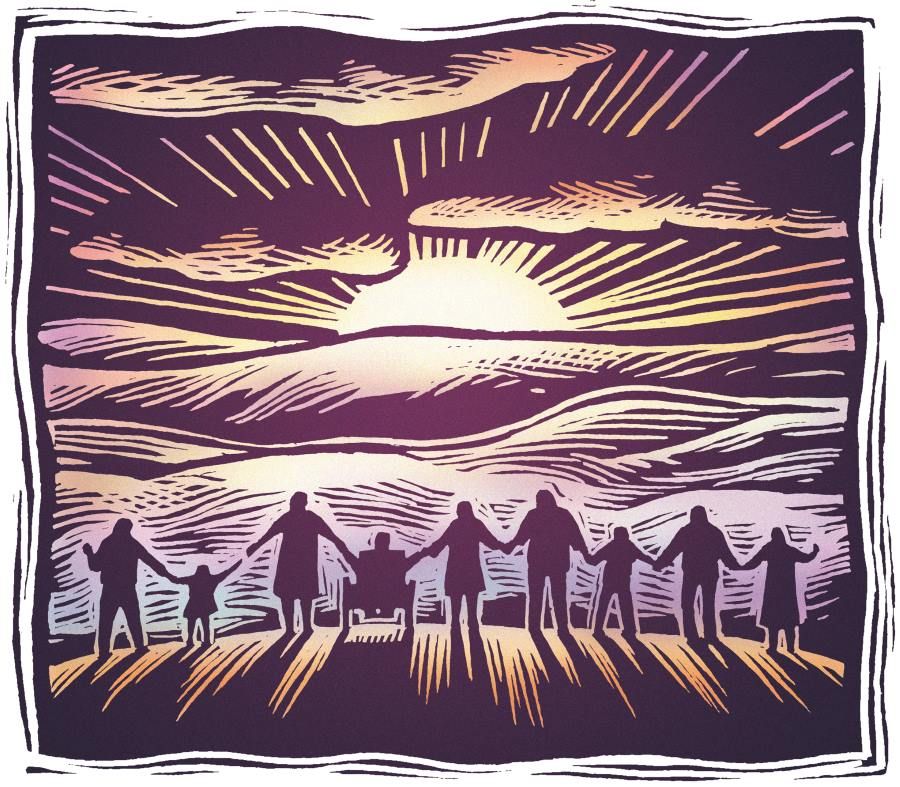 We hosted our rookie wedding in 2000. First daughter, first wedding. The reception was held just blocks away from St. Mary's on a hot summer night in the foothills of the Rockies. I don't remember who thought of it, but at the end of the liturgy, the presider invited us all to process together to the party, following the bride and groom.

And so we did. Our older son's fiancee held the sheet music as our younger son played his trumpet on the way. I recall hearing him belt out "Don't Get Around Much Anymore," because it made me laugh.

There were strangers on the sidewalk. Most of them smiled and waved, happy to see the newlyweds and their supporters all dressed up and grinning. A few onlookers did a double-take at the sight of the presider, his silk vestments flapping behind him as he strode Cascade Avenue. (Of course, my children remind me, they may have been St. Mary's parishioners surprised to see someone other than Angel parading around downtown in full vesture.  Angel was a young man of uncertain mental stability — but great taste — who broke into the sacristy on occasion and left dressed in whatever sacerdotal garments he could find.  He had a marked preference for vestments bearing signs or images of the Virgin of Guadalupe.)

All of the reactions were friendly, and we arrived at the party feeling that both places were linked by our procession and that both parts of the wedding — the first quietly celebratory and the other loudly so — had been made one.

The Feast of Corpus Christi falls on June 6 this year. Our parish, like many others, has revived the practice of the Corpus Christi procession after Mass. We follow the vested presider, who carries the monstrance in his veiled hands. And a listless, straggly procession it is.

Part of the problem lies with the canopy, which is borne by four people, under which the presider walks. Very few in the parish know how to hold a canopy aloft, keeping each pole an equal height to the other, all the while walking in sync, two bearers in front and two in back. It is not the sort of thing one is likely to learn on the job or in the neighborhood. Some of the men who learned Canopy 101 as kids now have trouble lifting anything, even their hands, above their heads.

Then there's the singing, or lack thereof. The choir is usually too far out in front or too far behind to keep singers together. And it's hard to walk and sing, especially if there is a hymnal and/or small children involved.

And there's the lack of any destination. We walk around the church. Once. Even in my spin class, known fondly by me as "Bicycling to Nowhere," we have a sense of destination, or time as destination. One hour after we climb on the stationary bikes, we are there.

I love processions. I look forward every year to our Epiphany procession through the house, blessing each room and claiming all of it — the rooms we display and the rooms we hide — for Christ. But the amiable confusion of a domestic rite becomes less amiable when hundreds are involved.

And so, a few suggestions: Decide who the canopy bearers will be and practice. We're accustomed to grabbing a late-arriving family and asking them to bring up the gifts at the offering. These are gestures we see and do every Sunday, but the Corpus Christi procession is once a year, and 14th-century origins notwithstanding, it's new to most of the assembly.

Get rid of the hymnals and photocopied hymns. Pick an antiphon everyone knows by heart and sing it. Sing it over and over. Sing it as long as it takes the assembly to process.  For our parish, the antiphon of choice might be might be the Taize version (GIA Publications) of "Eat This Bread." We often sing this simple hymn as the choir goes to Communion because our long familiarity with it means we don't need choral leading.

Sometimes, if we sing a simple refrain enough times through, the brave souls who can carry the harmony will take parts. This can be a moment of great beauty and true prayer, human voices unaccompanied and unadorned.

If yours is not a singing parish, consider enlisting musicians to walk along. Trumpets, guitars and accordions are all good strolling instruments.

Stational liturgies are meant to claim a space for Christ. "Claim" is a bold word, and claiming a bold action. Our church is downtown, and the thought of a procession through its Sunday-morning streets to the nearby park, around it, and back delights me.

I remember the World Youth Day procession through Denver on a stifling August day in 1993. People lined the way, waving and offering water. Some people brought out their hoses and sprayed sweating pilgrims happy for a shower. It took planning and permits — kind of like a wedding — but somehow, the barriers between church and town came down and even strangers shared our joy.

Editor's note: This reflection was originally published in the May 2010 issue of Celebration.

Column | How to hold a canopy

Editorial: The enemy is not the secular world, it is fear

Epiphany of the Lord: Following the seekers