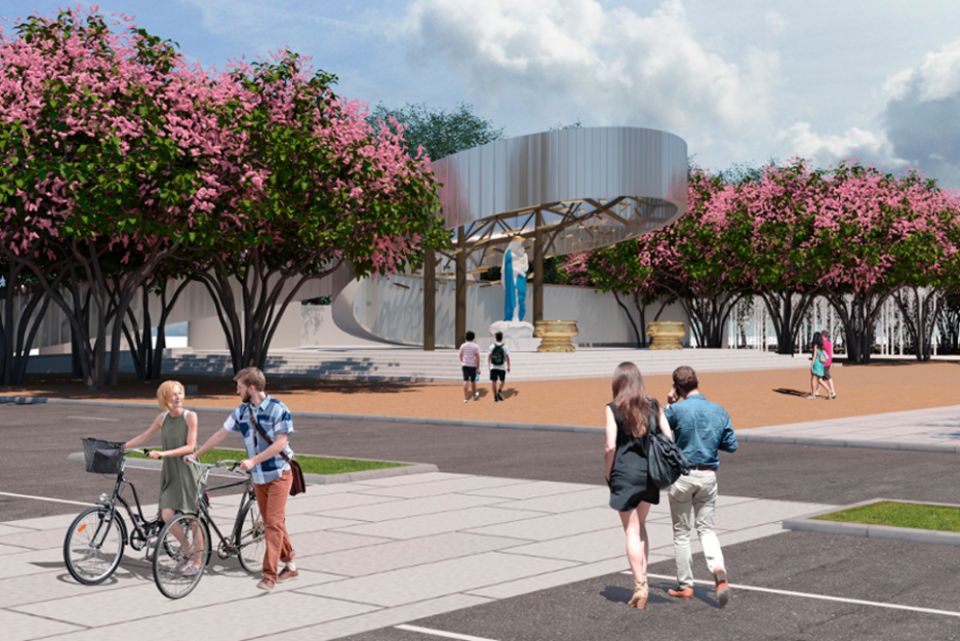 A rendering of the Diocese of Orange's Our Lady of La Vang Shrine. (Image courtesy of Torrence Architects)

Garden Grove, Calif. — Like most Vietnamese-American Catholics, Elysabeth Nguyen grew up hearing stories of Our Lady of La Vang, who is said to have saved her people from persecution.

The Marian apparition is said to have appeared in the late 1700s to a group of Catholics fleeing persecution in Vietnam. She then became a centerpiece of Catholic faith in the country, and after the fall of Saigon in 1975 — when more than a million Vietnamese became refugees — her intercession was credited with sparing the lives of her devotees. Churches named for the La Vang virgin are now thought to be as numerous in the United States as those dedicated to the apparitions at Fatima or Lourdes.

Now Nguyen and a group of Vietnamese-American Catholics in Orange County, California, home to the largest Vietnamese Catholic community outside Vietnam, are leading the development of the United States' first major stand-alone shrine to Our Lady of La Vang.

The multi-million-dollar shrine, located at the Catholic Diocese of Orange's Christ Cathedral in Garden Grove, will offer the 100,000 Vietnamese-American Catholics in the diocese a gathering place and, its builders expect, an international pilgrimage site. The diocese broke ground on the project in October.

"To have a shrine here reminds them of the homeland, of how grateful they are to be here, and the fruits and blessings they've had since coming to this country," said Nguyen, project manager for the La Vang Shrine Committee with the Diocese of Orange.

The 2-acre shrine, slated for completion in nine months, will feature a 12-foot statue of Our Lady of La Vang standing on a pedestal shaped like a cloud. Above her will be a glass canopy held up by treelike pillars and a stainless steel ribbon looping around it. The area will also include a plaza for celebrating Mass outdoors and four gardens for meditation and prayer. 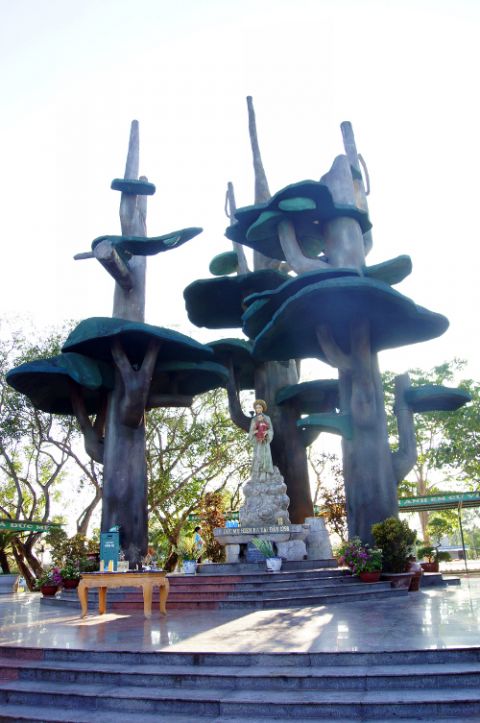 The Shrine of our Lady of La Vang in central Vietnam. (Photo courtesy of Creative Commons)

The shrine is not meant to replicate the shrine to Our Lady of La Vang in the village of La Vang, in Quang Tri province of Vietnam, said Aaron Torrence, the shrine's architect. The statue to the Virgin at the center of La Vang's pilgrimage site, once a European representation of Mary, has been replaced as recently as 2010 to reflect local visions of the Virgin in Vietnamese dress.

Nonetheless, Torrence traveled to Vietnam last year to better understand how the diocese's shrine should look and function, and his design incorporates elements from La Vang's shrine while blending with the modernist architecture of the Christ Cathedral campus.

"It's a balance that we're looking for," he said.

Torrence studied the architectural and botanical details of Vietnam's shrine and visited a nearby quarry to examine rock from the area. He also observed morning Mass and the way people interacted with the statue while they prayed.

The Orange County shrine, Torrence said, will allow worshipers to have an "intimacy" with the statue — pilgrims can get close enough to touch it as they pray to her, a lesson he learned in Vietnam.

In addition, details such as the pedestal the Virgin stands on and the treelike pillars surrounding her are reminiscent of the shrine in Quang Tri. And in the landscaping, Torrence said, he's using rocks from Vietnam and trees with yellow flowers similar to those in the jungle surrounding Vietnam's shrine.

The common elements, said Nguyen, "will appeal to the older generation when they visit. They'll [have a] sense that they're in Vietnam."

The Holy See has not recognized Our Lady of La Vang as an official Marian apparition, but in 1988 Pope John Paul II acknowledged her importance to Vietnamese Catholics.

Nguyen also traveled to Vietnam to visit the original shrine to study the history of the apparition and the rituals that take place there.

The director of the shrine in Quang Tri gave her a branch from one of the shrine's gardens that, according to tradition, is the same species Our Lady of La Vang gave Catholics to use as medicine when they fell sick while running through the jungle to flee persecution. A brick from the original church is on display at Christ Cathedral.

This year the Vietnam shrine's director, Fr. Hien Si Le, visited Nguyen in Orange County to see the progress on the shrine. He said he would return after its completion.

"There's a spiritual connection between the shrines here and in Vietnam," Nguyen said.

Thanh Thai Nguyen, auxiliary bishop for the Diocese of Orange and the only Vietnamese bishop in the United States, said that when he was growing up in Vietnam, his parish would hold Marian processions for Our Lady of La Vang every Sunday in May. And when he fled his home country by boat after the war, he prayed to her for protection.

"The Vietnamese are very strong in their Marian devotion," he said.

Once the shrine is completed, he said, the diocese will be able to host several retreats dedicated to the worship of the Blessed Virgin Mary, known as Marian Days, each year.

So far the community has raised nearly $8 million to fund the shrine.

But for Elysabeth Nguyen, the shrine is about more than the physical structure.

A version of this story appeared in the Dec 14-27, 2018 print issue under the headline: Shrine to Our Lady of La Vang rises in Southern California .

Pope's quotes: Its name is family