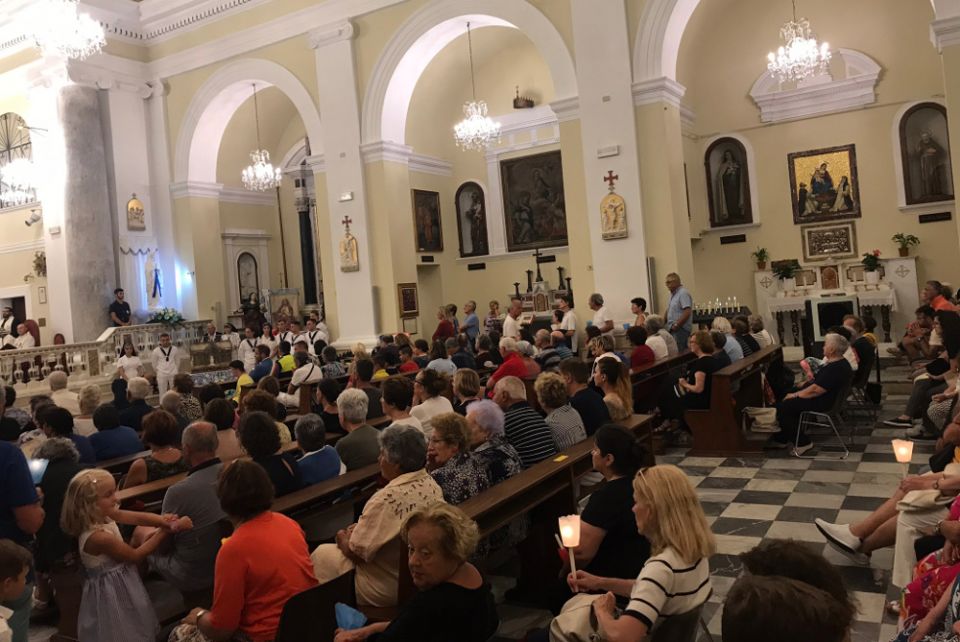 St. Bernadette's rib lies within a reliquary during Mass on La Maddalena island.

The red wine from dinner coursed through my veins as I jogged through the town center. I didn't want to miss it. I skipped up the marble steps into the 18th-century church and skirted up the side nave to get a good view. I scanned the sanctuary. Old ladies fanned themselves and parents tried to ignore their fidgeting children. It was a full house. And I was just in time: St. Bernadette's rib had arrived on La Maddalena island.

I was there for two weeks this summer. A teardrop of an isle just off the coast of Sardinia, Italy, La Maddalena is where my husband grew up. He had dreamed of going back and this was the trip of a lifetime for our family. Beach coves with cobalt blue water, wind carrying the scent of juniper and pine everywhere, fresh fish to eat — it did not disappoint.

Our first Sunday there, during Mass, the priest announced that Bernadette of Lourdes' rib was making a special 18-hour stop on the island as part of a tour of 33 dioceses in Italy. I whispered to my husband, "I am not missing that!"

I must admit: I was less interested in the devotion to St. Bernadette than in experiencing something I considered authentic. Now, I am wondering what really drew me there.

Standing in one of the side altars, I leaned my body against a cool marble column and took in the scene.

The church was packed. A ceremony was going on. Near the altar, five teenagers in outfits oddly recalling both scouting and religious life stood guard around the dollhouse-sized, bejeweled reliquary. The holy rib was not visible. The girls wore blue veils and the boys donned blue scarves. I wondered whether the call for vocations was having more success in Sardinia but later learned the kids belonged to a local branch of OFTAL, an organization dedicated to bringing the sick to Lourdes. Or bringing Lourdes relics to the sick, as it were.

The heat and the wine were having their effect. I could feel the sweat beads zooming down my torso. A short and plump signora next to me offered me her folding fan, which I politely declined. It took me a few seconds to make out what I was hearing. Oh yes, that's it. The congregation was saying the rosary. I joined in, the Italian words coming back to me so easily.

I had lived in Italy for a couple years in the '90s, which is how I know, and why I adore, the language. Since then, I've always been drawn to experiencing Catholicism in Italian. Go figure, with Rome being the headquarters of the church. But it goes deeper. Any language carries with it the baggage of all the experiences you've had in that language. The chance to experience Catholicism in another language has helped me over the years to see and hear things differently. To be more open. I liked saying the rosary in Italian. It didn't remind me of being told to do it when I was a kid. It felt peaceful. Bernadette's rib had touched the island, and was opening something in me.

As I recited the Hail Mary, I could feel something inside me unlocking. I chalked it up to the wine and continued praying.

Here's where I pause and admit that one of my favorite lines of Scripture is the guy who tells Jesus, "Lord I believe! Help my unbelief!" (Mark 9:24). Because in that exclamation are two completely contradictory statements that I can identify with. Completely.

Did I believe that Bernadette's rib had magical powers? One can only wish and hope. Did I believe that Bernadette and Mary were hovering magically somewhere nearby, happy to see an entire town of sweaty Italians and one tipsy American praying the rosary? This I honestly hoped not. If heaven exists (Lord!), and Bernadette was up there (I believe!), I'm pretty sure she had better things to do than keep tabs on one of her old ribs (Help my unbelief!). And yet.

By the fourth or fifth Hail Mary, that something grew more pressing inside me. I wasn't sure what it was, but it was something. I thought: This must be the same sense of belonging all humans crave and can experience at rock concerts, political marches and evangelical megachurch services. It's how we are hardwired. But this something didn't care what I was cogitating. It grew larger despite my attempts to rationalize it.

Then, all of a sudden, I was struck by an awareness. It went something like this:

Yes, I know that.

You can pray to a woman.

By the fourth or fifth Hail Mary, that something grew more pressing inside me. I wasn't sure what it was, but it was something.

But wait a minute, isn't this like how Romans had a pantheon of gods, including male and female deities?

No, this is different. Mary is the mother of everyone in this church.

OK then, I will pray. Grazie so much.

I remembered another time that Mary had miraculously popped into my life. When I was 5, my godparents gave me a small 14k gold miraculous Mary medal, which I promptly lost in elementary school. Years later, in my early 20s, I was walking down our driveway one day and saw something glinting in the sun on the ground. I bent down and brushed the dirt back and forth. It was my miraculous medal! I couldn't believe it. I had found it! Or it had found me. I decided I would never lose it again — and I haven't.

It dawned on me then what I was experiencing. It was the sensation of being lost and then found. The tear spigot went full blast and I began frantically wiping my cheeks. We all started singing "Salve Regina," which didn't help my situation one bit. I was sober by now, but probably looked drunker than when I had entered the church. Full of another Spirit. The nice signora looked at me with concern. Like a mother. I smiled, and she smiled back. No explanations needed.

[Dani Clark is a member of the Community of Sant'Egidio and works in communications at an international development organization. A regular contributor to Soul Seeing, Clark lives in Washington, D.C., with her husband and son.]

This story appeared in the Aug 23-Sept 5, 2019 print issue under the headline: St. Bernadette's rib opened something .

Francis and Mary; Benedict the reformer; India's Christians; and Ukraine

Pope cites three lessons from Mary: Be joyful, help others, never give up