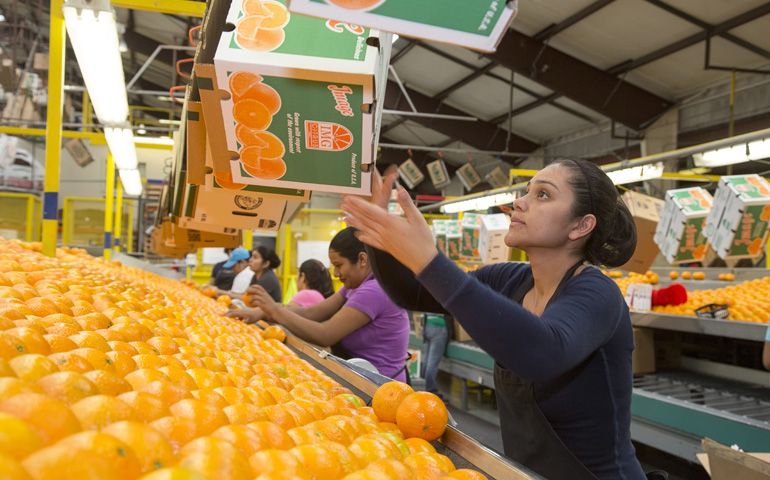 Oranges are sorted and packed by a worker in late February at the IMG Citrus packinghouse in Vero Beach, Florida, in a 2014 file photo. Labor Day, honoring U.S. workers, is observed Sept. 4 this year. (CNS/Jim West)

"The real conditions of existence for the 99% of young workers are in total contradiction with their eternal and earthly destiny."

The above quote about the 99 percent is attributed to neither Sen. Bernie Sanders nor to Pope Francis. Rather that quote, though perhaps apocryphal, is attributed to the founder of the Young Christian Worker movement, the late Belgian Cardinal Joseph Cardijn. And while Sanders may be famous due to his relentless repetition referring to the 99 percent, Francis has spoken just as relentlessly and repetitively on the issues of laborers; in particular, young workers and youth unemployment. Don't believe me on the relentless repetition? Click here, here, here, here, or even here. Oh, and here too. Don't worry, I'll spare you from the dozens of other related articles.

As a young adult — gainfully employed — in the U.S., where we are about to celebrate Labor Day, it seemed appropriate to discuss issues of laborers and the church today.

The church speaks of the dignity of work and the rights of workers, yet the introduction of work is not the most pleasant of directives. As far as I can tell, "work" is introduced by God to humanity in Genesis 3:17-19 as a perpetual punishment or consequence of the fall. So, while it stands to reason that "work" involves toiling, it need not involve torment or suffering. Yet, Cardijn, employing the "see, judge, act" method of responding to the world, saw the suffering of his father's labor and that of young men in Belgium and acted. This is why he started what was once a hugely popular Young Christian Worker movement that in 1925 received a papal blessing from Pius XI.

As the church speaks of the dignity of work it surely speaks, and perhaps even more loudly, on the dignity and great purpose of the family. The irony, or perhaps less charitably, hypocrisy, about this as relates to the church comes to light most clearly when the church is an employer. Specifically thinking of young adults who work, I think especially of "mission driven" employees whose love for the church leads to employment within the church. The lines directly preceding the introduction of work in Genesis 3 speak of childbirth. That's rather curious, as childbirth is what creates or perpetuates families, yet this is a big issue for young workers, especially women working in the church and society.

Earlier in the summer, the United States Conference of Catholic Bishops held a Catholic Convocation down in Orlando, Florida. I saw on Twitter many folks impressed with some comments of Kerry Weber, executive editor at America Magazine. I decided to call my fellow Mercy associate and fellow employee of a church-related entity to get clarification on what she said. When it comes to parish and diocesan centers, Weber told me that "women are the backbone [of employees] and they do it because they love their job, but also be because they love their church." She continued, saying, "Love of church cannot provide all of one's material needs."

Weber explained to me that, in Orlando, she said that women in leadership in the church is a good thing, as it should help bring about a focus on "appropriate balance between work and family life." She told me that this balance can be seen in the church providing a "fair wage, paid parental leave — parental, not just maternal — and to have the church understand the huge expense of childbirth and live up to its talk on making family a priority."

Weber referenced Jena Booher who founded Babies on the Brain, where Booher does consulting and coaching in the for-profit sector regarding HR policies, in particular those related to women and family leave. While Booher has not done any consulting with a church or religious organization, she believes the Catholic Church has something going for it that many for-profit entities do not: culture. In the culture vs. policy divide, many companies may have some positive or mother-friendly policies on the books, but the culture of the workplace makes those policies null and void. Booher provided some examples: non-mothers using designated pumping rooms for private phone calls; employees calling pregnant coworkers "fat" or "cows" to their face; and the ongoing yet unfounded bias that pregnant women are less committed to their jobs than non-pregnant peers.

"I don't say that it is easy, I say that it is worth it," Booher tells employers whom she coaches or consults. There is implicit bias that hurts working parents or pregnant women, and to see what your own bias is, Booher refers people to the IAT Bias surveys that one can take for free from Harvard University. While leave policies, flex time, daycare and other services and policies cost money, Booher points out that the cost of lost productivity through a good employee leaving — who otherwise wouldn't — can be just as much or more, especially in light of job vacancy and new hire costs.

That division of culture and policy Booher spoke of was enlightening — not just for leave policies but for the workplace in general. One hundred years ago, as then Bishop Cardijn's Young Christian Worker ranks were swelling in Europe, women were not in the workforce, and unionization was on the ascendency and had previously been name-dropped and endorsed in paragraph 49 of Rerum Novarum. The "gig economy" that is so prevalent now, especially for youth and young adults, was at least a half century away. Therefore it would seem that there have been improvements — eight-hour workdays, weekends, paid sick leave — and perhaps even progress in both workforce culture and policy. But, youth unemployment remains higher than overall unemployment, and that is accentuated by one's race and gender. Reading the signs of the time and using prudential judgement, I believe policies in the workforce and culture have changed. Yet we who claim to be followers of Christ, and the church as employer, continue to be called to be a leaven for the world, which includes the workplace.

As Christ is recorded as saying in Matthew, "Come to me, all you who labor." Let's not read that so narrowly as to exclude those who wish to labor in the formal economy but cannot for various reasons, either structurally or personally. If you find yourself sitting in a church pew between now and Labor Day, open the hymnal in front of you. In the back you'll likely find not only an alphabetical index of songs but also a topical index, and specifically one on labor. Perhaps review the text of a few of those songs so as to engender the dignity of work and why we should care about all who labor and wish to labor. Also say a prayer, an intercession, to St. Joseph the Worker, Cardinal Cardijn, St. Bakhita, and St. Gianna Beretta Molla, for the unemployed, the underemployed, those employed against their will, and those who are freely employed, particularly young mothers or fathers.

This brings me back to the opening quote on the conditions of young workers, as well as my conclusion on this topic. Beyond the hymnal and your personal prayers at Mass, be especially present for the Liturgy of the Eucharist, when the priest says the prayer, "Blessed are you, Lord God of all creation, for through your goodness we have received the bread we offer you: fruit of the earth and work of human hands, it will become for us the bread of life." The work of human hands — our labor — we give back to God. We sacrifice our time to work, to provide, to enable a family free from want and hunger, ideally. Yet I cannot help but to think that in light of (or perhaps in spite of) cultural and policy changes that have resulted in generally safer, more productive, less discriminatory workplaces, the words of Cardijn remain true today: "The real conditions of existence for the 99% of young workers are in total contradiction with their eternal and earthly destiny."

Abject poverty has declined exponentially since the founding of the Young Christian Workers, yet how many young people remain unemployed, how many more face difficult decisions of choosing between the dignity of work and the purpose of family life, and how many more are literally enslaved like those sold into sex trafficking? The work of human hands includes the gifts we give back to God, but also, I hope, the relentless repetition of working for peace, justice and integrity in our words and deeds.

Catholic groups react to Trump's US exit from Trans-Pacific Partnership

From health care to tax reform, from the frying pan into the fire