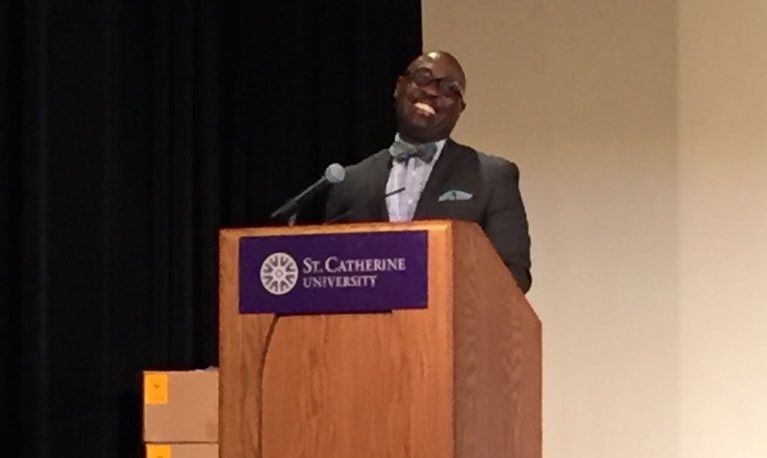 St. Paul, Minnesota — Catholic theologians were encouraged to "become revolutionaries against the principalities of whiteness" at a convention marking the 50th anniversary of the revolutionary year of 1968.

The theme of the annual gathering of the College Theology Society — which is meeting May 31-June 3 at St. Catherine University in St. Paul — is "You Say You Want a Revolution?"

"But this country has taught us to fear that word," he said, noting that for many, "revolution" is only acceptable or safe if it has "American" in front of it.

Instead, Christians should love the word "revolution" and turn the "holy vision of revolution" to issues of race, he said.

"We Christians serve a God of revolution," Jennings said May in the convention’s opening keynote address. "To be Christian is to admit that you are in the midst of a revolution."

The author of The Christian Imagination: Theology and the Origins of Race, Jennings noted that "whiteness" is not a physical characteristic or a people, but rather "a way of being in the world and of perceiving the world."

It is something so many people, including Christians, have made "natural," he said, and can only be unpacked if the stories of immigrants who sought to "become white" are told.

Whiteness is connected to Christian colonialism and the desire to seek freedom and control, rather than be controlled or enslaved, he said.

It is "a theological and spiritual disease," which needs to be addressed with the spiritual practice of renunciation, he said.

First, theologians should renounce how whiteness thinks, he said, countering whiteness that knows everything, is always the teacher, and sees knowledge as a commodity to be acquired.

Instead, Jennings held up "Jesus as a learner," in which knowledge is about relationship, not control or mastery. Renouncing how whiteness thinks also accepts other forms of knowing, he said.

Christians also must renounce how whiteness feels "normal"—except when it is being challenged, he said.

Whiteness also hides; it wants to be invisible, or "the norming norm," and that, too, must be renounced, Jennings said, as does whiteness' tendency to control space and geography, which can lead to a "suburbia of the mind," even in urban spaces.

"So many of our campuses have become sealed little bubbles," with students who are uneasy being outside white geographic space, where they are not in control, he said.

"We're telling [students] they need to change the world," he said. "But so many of us are preparing students to create suburbs."

Instead, Christians need to go to communities that have been left behind and advocate for them, he said.

Jennings remains hopeful, he said, recalling that after Dr. Martin Luther King's assassination in 1968, his parents never gave up hope.

His hope, he said, is built on the revolutionary life of a God that "calls us to a life together that aims to overturn this world, especially the world formed by whiteness."