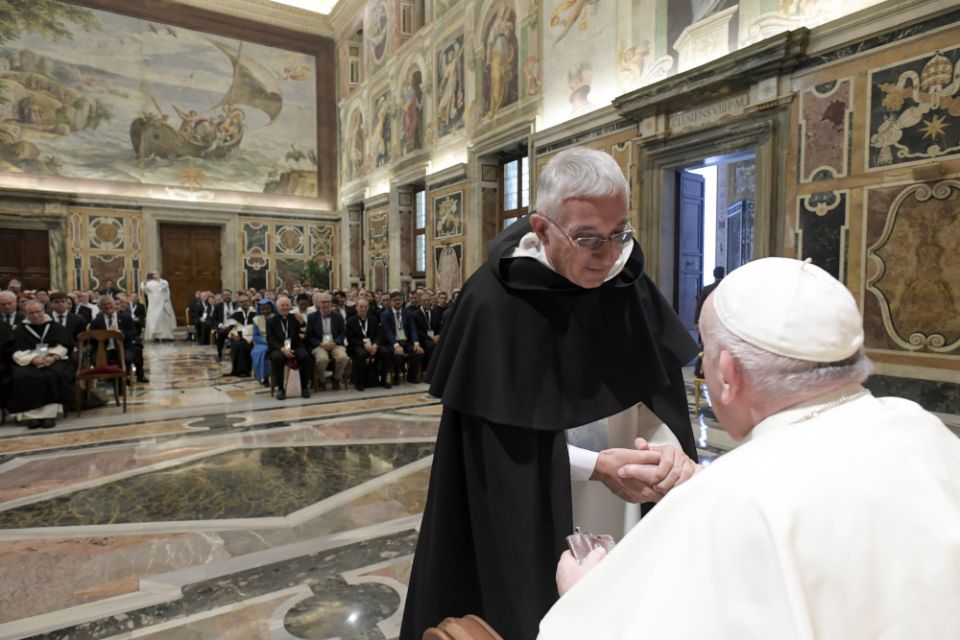 Pope Francis greets Dominican Father Serge-Thomas Bonino, president of the Pontifical Academy of St. Thomas Aquinas, during an audience with participants attending the International Thomistic Congress, at the Vatican Sept. 22, 2022. The pope urged scholars of St. Thomas Aquinas to explore and share his teaching on creation. (CNS photo/Vatican Media)

Vatican City — When reflecting on and teaching about St. Thomas Aquinas or any of the great theologians or philosophers, there is a danger of using the master to promote one's own thought, Pope Francis said.

"And with Thomism this has happened," the pope told students and scholars of St. Thomas Aquinas, who were participating in the International Thomistic Congress in Rome Sept. 19-24.

As an example, he said Sept. 22, "many interpretations" of Thomism have been "a slave to casuistic thinking," taking a particular point and generalizing it to apply to other cases.

To avoid such a pitfall, he said, "when we want to explain the thought of a master, the first step is contemplation, to let ourselves first be drawn into that magisterial thought. The second, with timidity, is explanation. And finally, with much caution, interpretation, but this with much caution."

Aquinas is "a master," not just "an intellectual like many," the pope said. And with a master, greater care is needed.

"St. Thomas was a light to the thinking of the church, and we must defend him from all these 'intellectualistic reductionisms' that imprison the greatness of his magisterial thought," Francis told the group in off-the-cuff remarks.

The pope ended his remarks by telling the group that he also would give them a copy of the speech he had prepared for the meeting.

"And now I'd like to give you a blessing and greet those who want to be greeted," he said, before adding, "if someone doesn't want a greeting, there's no obligation."

In his prepared text, Francis urged the scholars and students to reflect on and explore more deeply Aquinas' teachings about creation and the interconnectedness of all that God made.

"For St. Thomas, creation is the very first manifestation of God's stupendous generosity, indeed, of his gratuitous mercy," he wrote. "It is the key of love, says Thomas, that opened God's hand and keeps it always open."

Aquinas, he said, contemplated "the beauty of God shining in the ordered diversity of creatures. The universe of visible and invisible creatures is neither a monolithic block nor pure shapeless diversity, but forms an order, a whole, in which all creatures are related because they all come from God and go to God, and because they act on one another thus creating a dense network of relationships."

Francis urged the participants not to treat the writings of St. Thomas "as a museum object," but to allow them to be a font of inspiration for responding to new questions and challenges.

"Go to Thomas! Do not be afraid to increase and enrich with new things what is old and always fruitful," he said. Following the example of Aquinas, Christians cannot be afraid of entering into a "sincere, rational dialogue" with the culture of their time because they know, like he did, that the ultimate source of all truth is the Holy Spirit.