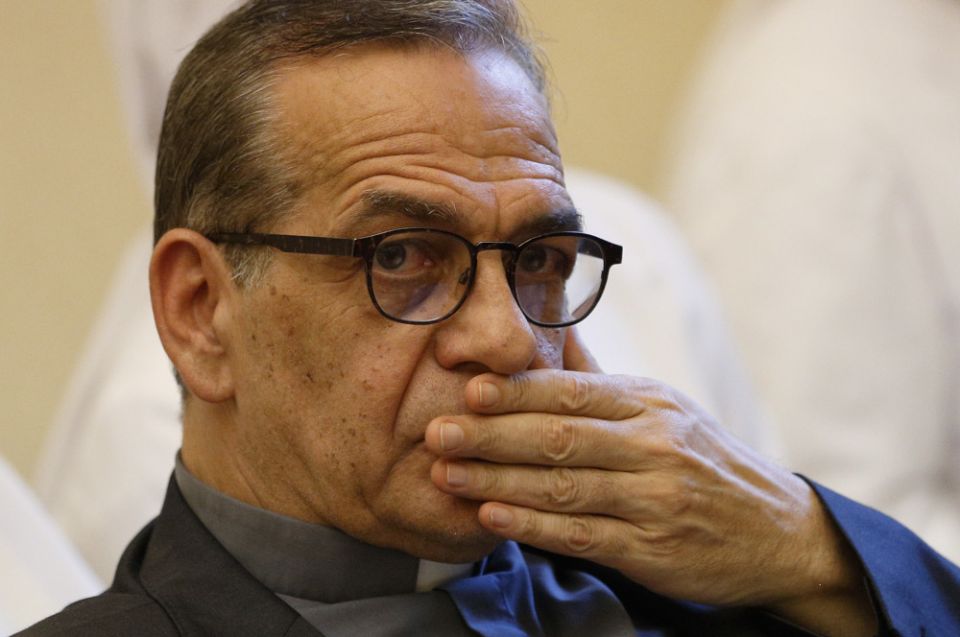 Msgr. Gilfredo Marengo attends the presentation of the book, "The Birth of an Encyclical: 'Humanae Vitae' in the Light of the Vatican Archives," at the Congregation for the Doctrine of the Faith at the Vatican Oct. 18, 2018. (CNS/Paul Haring)

Archbishop Vincenzo Paglia, chancellor of institute, made the appointment, which was announced Oct. 30.

Marengo has a long association with the institute founded by St. John Paul II in 1982. He was among the first batch of graduates of the then-fledgling school of specialization. Then, the late Cardinal Carlo Caffarra, founding president of the institute, hired him in 2001 to succeed Cardinal Angelo Scola – the priest's thesis adviser – to chair the department of theological anthropology. He's been a full professor at the institute since 2013.

Author of numerous books on church teachings, he edited the full collection – titled "Human Love in the Divine Plan" – of St. John Paul's weekly general audience talks on love and the sacramentality of marriage.

His academic background "gives him the ability to best promote the institute's tradition in the renewed context of its refoundation," the announcement said.

The appointment was the latest change at the institute, which released in mid-September its full lineup of new and continuing courses for the 2019-2020 academic year.

Questions and controversy had erupted over the summer concerning what impact changes would have on the institute's focus on studying church teaching on marriage and the family, including changes in course offerings and how faculty would be hired. Critics feared that the changes reflected a desire to break away from St. John Paul's legacy and end authentic church teaching.

However, Pope Francis said he wanted the institute to better prepare priests and pastoral workers to be faithful to the teaching of Christ while helping to meet the challenges families face today with a more competent understanding of the social, economic, political and legal issues that affect their lives.

Msgr. Pierangelo Sequeri, the institute's president, disputed the claim the new institute was "built on the will to destroy what was done previously and on a theology that would adapt to the world and endanger the integrity of Catholic doctrine. Many fantasies have surrounded its redesign."

He told the French Catholic newspaper La Croix in early October that in addition to the new statues, norms and curricula being approved by the Vatican, all the professors "have been validated by the Congregation for the Doctrine of the Faith."

Catholic doctrine is not "in peril," he said; it's more a question of bringing an "aggiornamento" (update) to people's "mental habits."

Sequeri, a noted theologian, criticized the way the reform of an educational institution was turned into "a war between two popes."

He said there is a form of "intellectual laziness" that believes all answers can be found and defended within a fixed framework "beyond which there would be nothing more to say."

Any attempt to "ideologize" St. John Paul is detrimental, he said, "because, when deeper reflection becomes necessary, people have become accustomed to a certain language and say, 'You betray me because I am with the pope.'"

"But that's not how things are done in theology. I note a minority, but worrying, return to a certain Protestant principle, in which a theologian could stand up and say to the pope, 'You are mistaken! You're moving away from the authentic tradition!'"

Instead, a theologian's work in interpretation must do the opposite, saying with respect, "In my opinion, this thing is not entirely consistent with tradition. But that being said, we must add, 'I am only a theologian,' because, otherwise, we try to link the community to this interpretation."

"To claim to be an authority and judge the magisterium and the pope is like setting oneself up as a magisterium: it is no longer Catholic theology," he said.

Marengo told Vatican Insider in July that all of St. John Paul's innovative efforts to support life and the family – his encyclicals and the creation of academies, dicasteries and institutions – were all new ways to help the church community "emerge from the dry, divisive theological polemics" of the past.

St. John Paul wanted to make an impact on the life of the church, he said, by underlining how the newness of the Gospel is always capable of confronting every challenge and "temptation in history and the world."

Helping people today who are struggling with the many difficulties associated with life and family issues means "moving beyond the tendency to invest in an ideal image of the family" and instead upholding the certainty of faith in God's plan for humanity, he said. It also means recognizing that plan is followed along a real journey of life with all its errors and weaknesses, he said.

The study and teaching of theology, he said, is about collaborating with the life and mission of the church. It offers knowledge and research that examines "in the deepest and most rigorous way the truth of the revelation and wisdom of the tradition of faith in view of its better comprehension at the present time," he said, quoting Francis' document, "Summa Familiae Cura" instituting the new Pontifical John Paul II Theological Institute for Marriage and Family Sciences.

Take and Read: The Analogical Imagination

Devil not yet deleted from official church texts