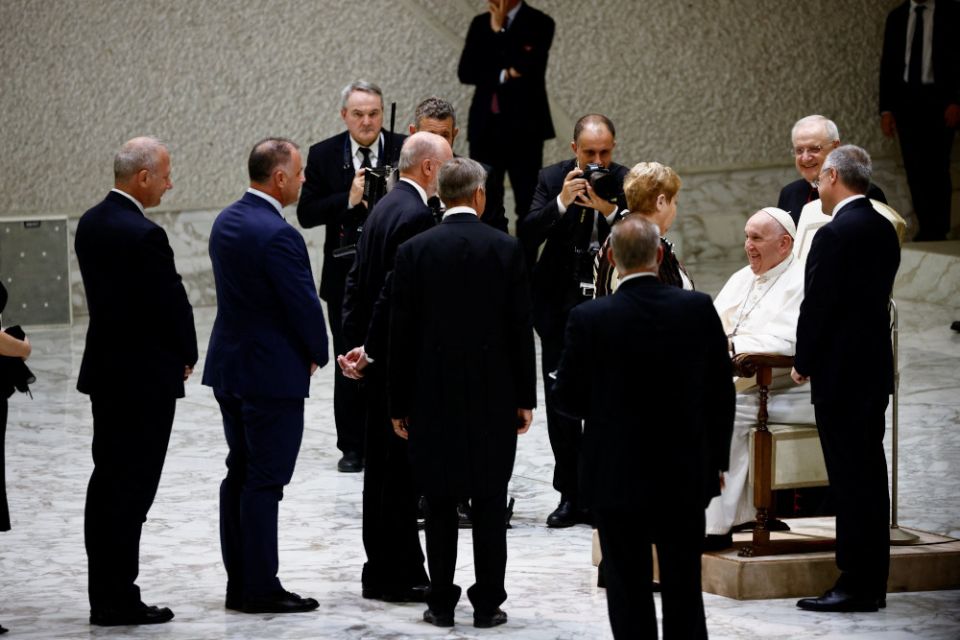 Pope Francis attends an audience with members of Confindustria, the General Confederation of Italian Industry, and members of their families, in the Vatican audience hall Sept. 12, 2022. (CNS photo/Yara Nardi, Reuters)

Vatican City — Jesus throwing money changers out of the temple and talking about how difficult it is for a rich person to get to heaven make it easy to assume that there is little hope for the salvation of a business owner, Pope Francis said, but that is not true.

In the Gospel, money is used to pay Judas to betray the Lord, but money also is used to help pay for the care of the man rescued by the good Samaritan, the pope said Sept. 12 during a meeting with members of Confindustria, the General Confederation of Italian Industry.

Members of the confederation represent more than 150,000 companies -- from major industries to small, family-operated enterprises -- and together employ more than 5.3 million people, the organization said.

"In the marketplace there are 'mercenary' entrepreneurs," who take advantage of workers and cut and run the minute danger appears, the pope said, but there also are "entrepreneurs similar to the good shepherd, who suffer the same as their workers, who do not flee before the many wolves circling around."

The market flourishes and helps build up individuals and society when there are more good shepherds sharing their resources than there are mercenaries using their money to spread death, the pope said.

In Matthew 19:24, Jesus tells a rich young man, "It is easier for a camel to pass through the eye of a needle than for one who is rich to enter the kingdom of God."

Just because it is not easy, the pope said, does not mean it is impossible.

The first step is sharing, he said. Not all are called like St. Francis of Assisi was to strip themselves of all their wealth.

Francis thanked the Italian business leaders particularly for their support of Ukrainian refugees and other forms of charity and philanthropy.

But he also urged them to be very honest in participating in a major form of wealth-sharing: paying their taxes, a way that their wealth "becomes common goods, public goods: schools, health, rights, care, science, culture, heritage."

Job creation is another essential way for the business leaders to share wealth, he said. "Work has always been a form of wealth sharing: By hiring people you are already distributing your assets; you are already creating shared wealth. Every new job created is a slice of dynamically shared wealth."

In Italy and other countries with a very low birthrate, he said, employers must ensure that young workers -- especially women -- have the support and flexibility at work that they need to have and raise children.

Increasing the birthrate, Francis said, is "patriotic," because it gives new energy to the nation, and without new workers entering the job market there will be no one to support pensions as current workers retire.

And, the pope said, just as he has urged priests and bishops to "smell like their sheep" by being close to and living with them, employers and business owners must have "the 'smell' of work."

"The good entrepreneur knows workers because he knows work," the pope said. "Many of you are artisan entrepreneurs, who share the same daily toil and beauty as your employees."

Losing contact with the work and workers, spending life "in offices, meetings, travel and conventions" without regular visits to workshops and factories, he said, not only creates distance between employers and employees, it also often leads to a lack of interest and the eventual decline of the business.

"Today the share of value that goes to labor is too small, especially if we compare it with that which goes to investment income and the salaries of top managers," the pope said. "If the gap between the highest and lowest salaries becomes too wide, the business community gets sick," because all sense of a common project and common destiny are destroyed.

Mary Magdalene gets her feast