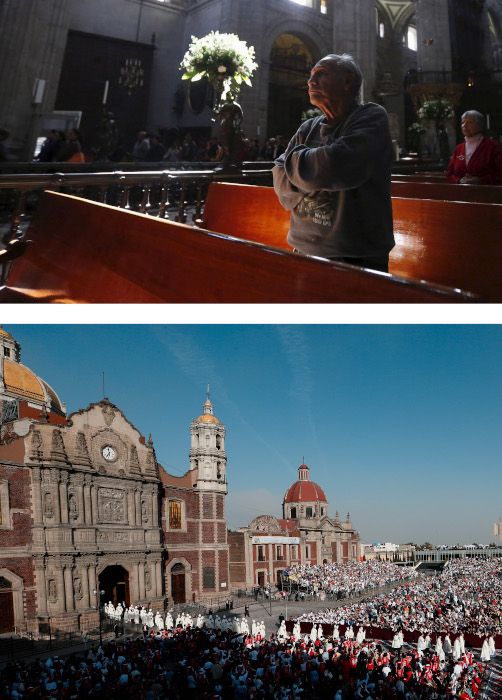 A combination photo shows the Metropolitan Cathedral and Basilica of Our Lady of Guadalupe. Pope Francis has divided the Archdiocese of Mexico City; what remains part of that archdiocese includes both the basilica and the cathedral. (CNS photo/Reuters/Paul Haring/Edgard Garrido)

Three new dioceses have been carved out of the Archdiocese of Mexico, a move Cardinal Carlos Aguiar Retes of Mexico City said will bring pastors "closer to the all the inhabitants."

The decision, announced Sept. 27, creates the dioceses of Azcapotzalco in northwest Mexico City; Iztapalapa, the Mexican capital's largest borough; and Xochimilco, in the far south of the city. All were carved out of what had been one of the world's largest archdioceses.

What remains of the old Archdiocese of Mexico will contain the metropolitan cathedral and Basilica of Our Lady of Guadalupe. The population it serves will shrink from roughly to 8.8 million people to 5.28 million, according to archdiocesan publication Desde la Fe.

Last November, the Archdiocese of Mexico submitted plans to the Vatican to divide the archdiocese, saying in a statement that it was "a restructuring to provide better pastoral attention to the faithful."

Talk of dividing the archdiocese dates back decades. But Retes, who oversaw a partition of his previous archdiocese in suburban Mexico City, advanced the issue after arriving in the national capital in February 2018.

Some church observers saw the partition as long overdue.

"Compared to the U.S., worldwide, Mexican dioceses are the largest," said Rodolfo Soriano-Nunez, a sociologist who studies the Mexican Catholic Church. "Only Germany and the Philippines come close to Mexico, and even in the German case there are huge differences, because they have more auxiliary bishops than here."

A later survey he conducted found only 13 percent of Mexican Catholics were certain of the diocese they lived in, while only an equal number was certain who their bishop was.

"The way Mexican dioceses work, bishops hardly ever go to certain small parishes ... because dioceses are extremely large," he said.

In the case of his home parish in Mexico City, Soriano-Nunez says none of the past four archbishops have visited, though auxiliary bishops have celebrated Mass there.