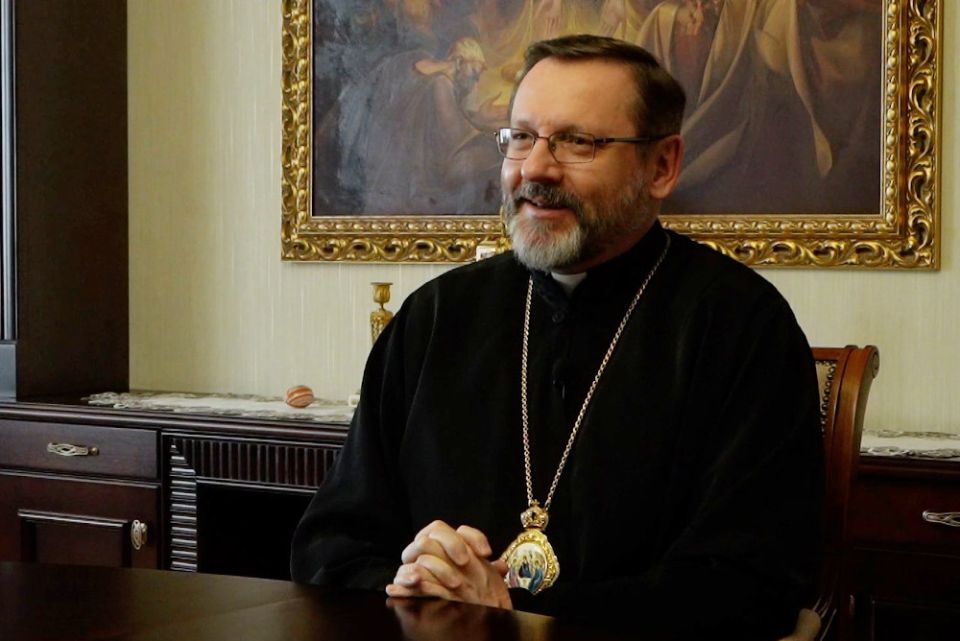 Archbishop Sviatoslav Shevchuk of Kyiv-Halych, head of the Ukrainian Catholic Church, speaks in Kyiv, Ukraine, May 30, about Russia's war on his country, Pope Francis' condemnation of the war and about the role of Christian ministers in a situation of conflict and danger. (CNS/Voznyak Production)

Marking the 100th day of Russia's war against Ukraine, Pope Francis again called for international efforts to stop the aggression, respect human life and end "the macabre destruction of cities and villages" in the country.

According to the popular Italian blog Il Sismografo, the pope's June 5 plea was the 52nd time he spoke publicly about the war, which began Feb. 24. But, again, he did not name Russia as the aggressor or lay blame for the tragedy at the feet of Russia President Vladimir Putin.

Archbishop Sviatoslav Shevchuk of Kyiv-Halych, head of the Ukrainian Catholic Church, is not so reticent. He has been publishing a video message each day during the conflict, condemning Russia and accusing its troops of following "a genocide manual."

The pope's decision not to name and shame Russia has caused confusion for many people inside and outside Ukraine.

So, why the difference?

The pope has a different role.

"The Holy Father has condemned the war, he's pointed explicitly to who is guilty for it, how international law and human dignity are being violated today, in Ukraine in particular," the archbishop said. "But he is the universal pontiff so he uses a language that, on the one hand, can fulfill the prophetic mission of the church and on the other, can open all possible paths to dialogue, to communication. So that's why the pope speaks as he does, though you could ask him," he added with a smile.

Meeting children, including from Ukraine, June 4, Francis also said again that the idea of him visiting Ukraine was still under study.

"Work is being done on this," Shevchuk said, without giving away details. "Let's say, the communication between the Apostolic See and Ukraine is quite intense and solid. And I think that we are all working so that one day the Holy Father will visit us here in Kyiv." 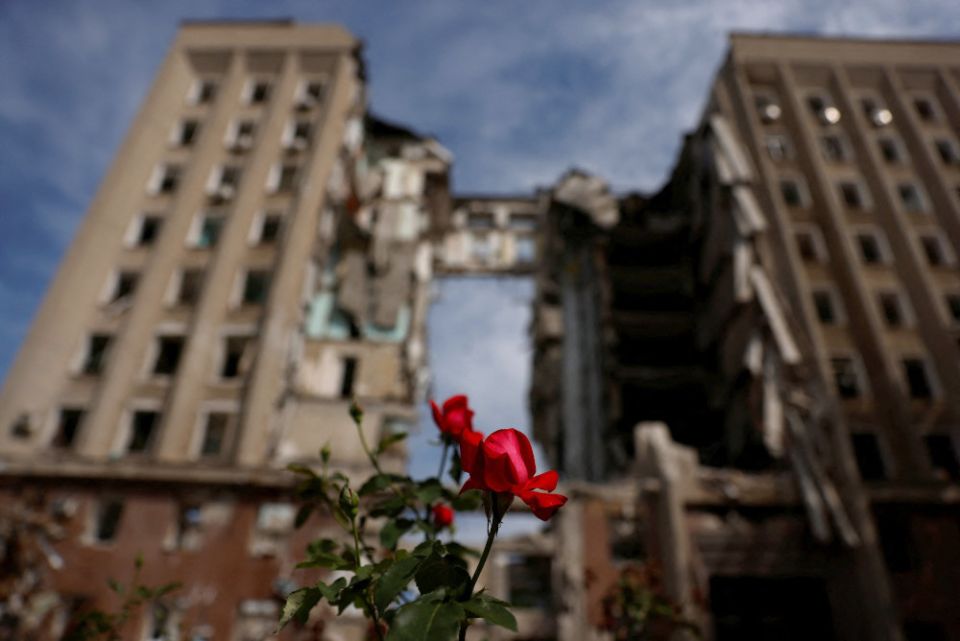 A flower is pictured in front of the destroyed regional administration building following shelling by Russian troops in Mykolaiv, Ukraine, June 8. (CNS/Reuters/Edgar Su)

In the meantime, the archbishop is doing some visiting of his own, checking on the people, priests and churches in towns liberated by the Ukrainian army.

"I visited our church in Irpin for the second time and was able to enter it after the (military) sappers had cleared it. They found several exploded mines and one mine that hadn't exploded so it was good that during the first visit we listened to the advice of our military and didn't go inside (any of the buildings), particularly the rectory," he said.

"We have not had any reports of priests dying" because of the Russian attacks, the archbishop said. And as for property damage, it is too early to tell. "For example, it is said that the town of Volnovakha doesn't exist anymore, and we definitely had a church there. But we don't have information about the state of these buildings now."

Shevchuk said he began his daily video messages to let people know that he was still alive and that the church was with them. "As time went on, of course, we were looking for a way to speak not only about breaking news and how, let's say, we survived the last night and day, but also to share the Word of God."

The war clearly is "a fight between good and evil," he said, so he wanted to offer "brief reflections about various aspects of our life, our reality and the teaching of the church because it is very important for us to live through this tragedy in a Christian way."

"The pope is the pope. He is the pastor of the universal church, and we are Ukrainians, we are the pastors of the Ukrainian people."

In some parts of the country, the archbishop said, people are returning to their homes, if they can.

"Those who are back need their priests to be present, they need a spiritual life and help, including humanitarian aid," he said.

One interesting thing, he said, is the ecumenical cooperation "in these towns where tragedies have happened. For example, our priest in Irpin returned but cannot live in his house because it was damaged. So, the Roman Catholic priest hosted him. He's staying there while trying to repair his house near our church and while waiting for his family to return."

"I am personally very grateful to the evangelical Christians, the Baptists, whose church is called the Irpin Bible Church, if I remember it right. Thanks to their pastor, this community evacuated our priest with his family and a lot of our parishioners," he said. "As I've told the priest, I'd like to meet this pastor one day to shake his hand and thank him for such an active Christian love."

Of course, the archbishop and his staff did what they could to help, too, including by opening the Cathedral of the Resurrection and its basement as a shelter when Kyiv was under constant bombardment.

Because there were so few suitable shelters in that part of Kyiv, he said, "there were days when close to 500 people were staying there overnight."

"Our shelter also spontaneously became a kindergarten and a zoo — we had all kinds of animals there: cats and dogs and hamsters and parrots and fish," because people brought their pets with them, he said.

"The war is a terrible thing, it's a great evil, a revelation of that mysterium iniquitatis, that mystery of evil that St. Paul the Apostle talks about," the archbishop said. "But in the midst of war, in the midst of that atrocity, there are still islands of compassion, islands of love, among Christians in particular, that gives a ray of hope, hope for a very powerful Ukraine in the future."

Pope's recent appointment of women is too little, too late