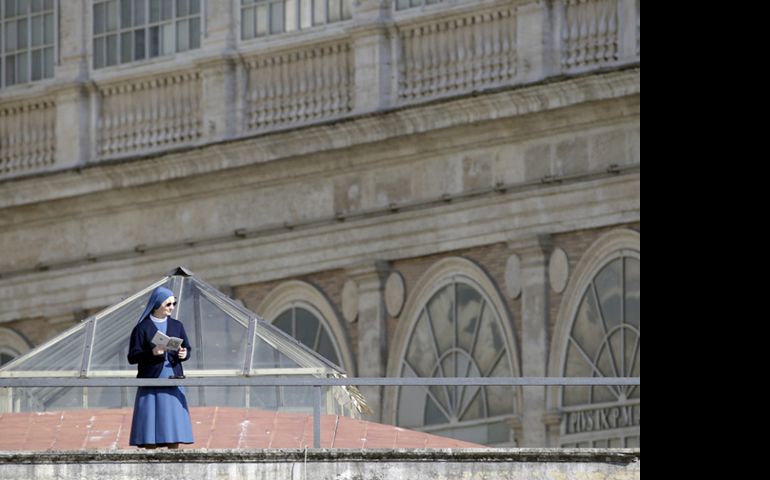 A nun looks on as Pope Francis arrives to lead the Palm Sunday mass at Saint Peter's Square at the Vatican, on March 20, 2016. (Reuters/Max Rossi)

When Pope Francis suddenly agreed, during an off-the-cuff chat last week with nuns gathered in Rome, to explore the idea of ordaining women as deacons he touched off what has by now become a typical Francis-like media storm:

A day later, on May 13, the Vatican stepped in with a fire hose to douse the wilder speculations and reiterated that Francis had not said women could be ordained deacons or that this could lead to ordaining women as priests. He simply agreed to set up a commission to find better answers to what has been a longstanding and important question for theologians, scholars and church historians.

But whatever does come out of this potentially historic opening -- and the outcomes range widely, from maintaining the status quo to actually ordaining women as deacons -- the move will have at least three other concrete effects that could be just as important:

1. It will launch a genuine exploration of the "theology of women"

Francis has frequently called for greater roles for a women in the church -- and did so again last Thursday in the meeting with hundreds of sisters from the International Union of Superiors General, a global umbrella group for leaders of women's religious orders.

He has also regularly called for a "deeper theology of women," without, however, providing much in the way of that theology or indicating what it really means or how it would work on the ground.

As papal biographer and Vatican expert Austen Ivereigh tweeted, such a commission would "quickly become a discernment about the role of gender in church leadership roles."

Indeed, wherever the discussion of women deacons winds up, it would help clarify exactly what areas are open to women, and why, or why not.

The reality is that in the past few decades, there has been enormous growth in the participation of women in ministry and church life, a growth that has gone hand in hand with the explosion in role for lay people. But many of those roles -- especially when it comes to participation in the liturgy -- remain contested and somewhat ad hoc and not at all universally accepted.

In fact, there has been a strong conservative pushback against what some on the right decry as a "feminized" church. A discussion of women deacons could settle many of those arguments.

2. It will launch a deeper theology of the diaconate (and ministry)

The other gray area that the "deaconess" debate illuminates is the unsettled question of what exactly a deacon is.

The role of the deacon was created, as recounted in the New Testament, by the Apostles so that they could deploy ministers specifically dedicated to doing charitable works and thus freeing them to focus on preaching.

In the Catholic tradition, the role of deacon was eventually subsumed into the priesthood and hierarchy, until the Second Vatican Council of the 1960s revived the diaconate as an ordained order open to "mature married men" over 35 who can be married.

But in essentially recreating an order of ministry after more than a millennium there were bound to be ambiguities about not just what women deacons were in the New Testament, and what they could be now, but what deacons themselves are and how they are distinct, or not, from other ordained clergy, namely priests and bishops.

As Deacon William Ditewig, a theologian at Santa Clara University and a leading expert on the diaconate, wrote at the Catholic blog site Aleteia, "this is ultimately a question, not simply about women in the diaconate, but about a theology of the diaconate overall."

Ditewig's fellow deacon and Aleteia colleague Greg Kandra also noted that a few years ago, in seeking to distinguish the order of deacons from that of priests and bishops, the Vatican -- and in particular Cardinal Joseph Ratzinger, the doctrinal traditionalist who later became Pope Emeritus Benedict XVI -- may have made it easier for the church to decide to ordain women as deacons.

That's because the 2009 tweak to canon law made it clear that deacons were not equivalent at all to priests who act "in persona Christi," or in the place of Jesus in performing all the sacraments, and that deacons simply "serve the People of God in the ministries of the liturgy, the word and charity."

The clarification would both ease any concerns about ordaining women deacons as a stepping-stone to women priests, and it also eliminates a gender requirement in that deacons don't have to be men because Jesus was a man.

3. It will push the pontiff's dynamic of dialogue and discernment

If there's one thing about Francis that drives Catholic conservatives crazy, it's that he wants to open up conversations among the faithful instead of shutting them down with blanket directives.

"He never says all that he has in mind, he just leaves it to guesswork," Sandro Magister, an Italian Vatican-watcher and regular critic of the pope's, fumed in a recent column. "He allows everything to be brought up again for discussion. Thus everything becomes a matter of opinion, in a church where everyone does what he wants."

Well, Francis really doesn't want everyone to go off willy nilly, not by a long shot.

But as Jesuit Fr. Thomas Reese wrote about the women deacons story, "what is most significant in Pope Francis' response is the way it shows how open he is to discussion in the church of ideas and how he wants discernment to be the process by which the church makes decisions."

"In the past, the clerical establishment would discuss church matters behind closed doors so as not to 'confuse the faithful.' With Francis, that day is over," Reese wrote. "It is clear he hates anything that smells of clericalism."

On the other hand, Francis may see a step to ordain women as simply a way to "clericalize" them. But it's clear that he's happy to have the debate, even if many are not.