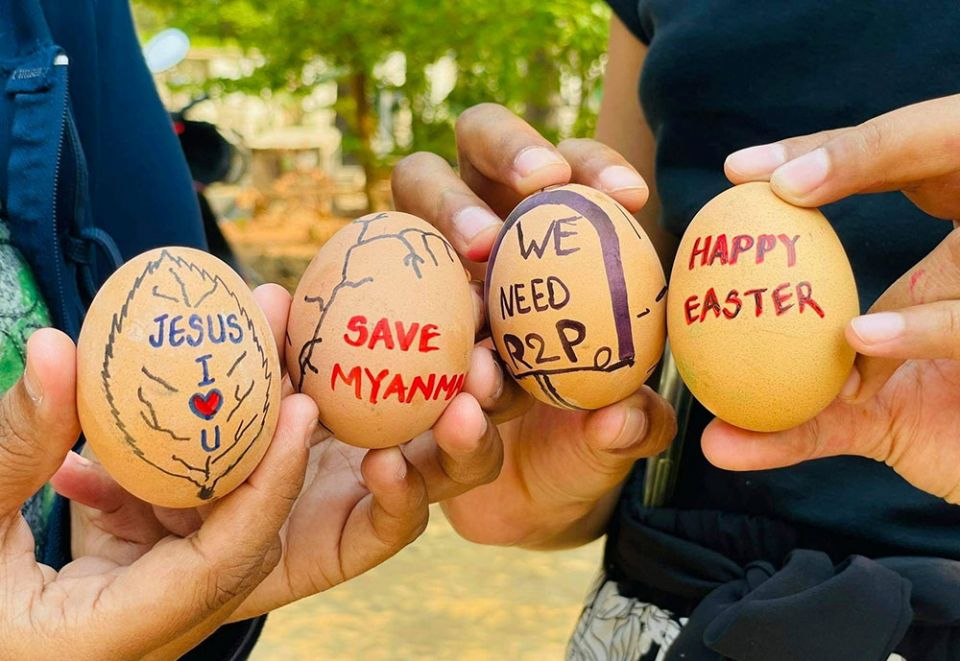 Easter eggs painted with slogans from the protests against the military coup are displayed in Mandalay, Myanmar, April 3. (CNS/Social media via Reuters)

Vatican City — Pope Francis will celebrate a Mass for Myanmar Catholics in Rome May 16, underlining his religious and diplomatic efforts to promote peace and reconciliation in the troubled Southeast Asian country.

Democratic protests have sparked all over the country, with some Catholics taking center stage in opposing the violence of the armed forces. Almost 1,000 people have reportedly been killed in Myanmar since the military coup and many more have been displaced by raids and airstrikes.

"Every dictatorship must find someone to oppress. So we always have a target on our back," said Missionaries of Faith Fr. Maurice Moe Aung, speaking online from Myanmar with a pool of Vatican journalists.

"Probably, if this difficult situation continues and as it's already happening in Buddhist monasteries, the military forces will also enter Catholic churches to control the situation," he added.

Aung said protests continue all over the country, with many arrests putting further pressure on a population already struggling due to the pandemic and a crumbling economy. According to the missionary, time is running out for the international community to intervene and prevent further bloodshed in Myanmar.

Separately, a publisher of an independent newspaper in Yangon, Myanmar's biggest city, told NCR that people there are worried about saying anything critical about the coup on social media or in public for fear of being arrested.

The publisher, who asked not to be identified for fear of reprisal from the military government, said police "go to protesters' apartments or houses and arrest them."

"Some of them were killed at night and their families were informed to collect their bodies on the next day," said the person.

The United Nations has already intervened by asking for an immediate halt to the violence and restoration of the democratic process. Francis and the local Catholic bishops have also been outspoken in promoting reconciliation in the country.

The pope made his first appeal shortly after the coup, offering his prayer for leaders in the country so they may strive toward "the common good, promoting social justice and national stability, for a harmonious, democratic coexistence."

Since then, Francis has often mentioned his closeness to the people of Myanmar, in particular its young people and clergy. Christians represent roughly 5% of the country's population, which is 89% Buddhist, followed by a Muslim minority. Its Catholic population is spread over 16 dioceses, and Francis appointed the first red hat in Myanmar to Cardinal Charles Maung Bo.

Catholics have supported the peaceful protests and urged the military to adopt nonviolent measures and dialogue. In a public statement on Feb. 21, the bishops' conference in Myanmar joined other religious leaders in "pleading for restraint in the streets and a return to dialogue."

"The heartrending scenes of youth dying in the streets wound the conscience of a nation," they wrote. "Let not its sacred ground be soaked in fraternal blood. Sadness of parents burying their children has to stop. Mothers' tears are never a blessing to any nation."

St. Francis Xavier Sr. Ann Rose Nu Tawng of Myitkyina, the capital of the most northern region of Myanmar, made headlines in late February when she knelt before the armed forces to protect protesters, a gesture praised by both Bo and Francis.

"I too kneel on the streets of Myanmar and say: Stop the violence! I too reach out my arms and say: May dialogue prevail!" the pope said during his general audience March 17.

"His presence was important because we are viewed as the religion of the foreigners and we weren't welcomed even by the Buddhists," Aung added.

Things changed after the pope's apostolic visit, he said, but the military coup has put a halt to progress in the country and limited the activities of religious groups. Francis' celebration of Mass on Sunday is the latest effort from the Vatican to draw global attention to the growing tensions in Myanmar.

The newspaper publisher noted that Francis met the leader of the coup, Gen. Min Aung Hlaing, during his 2017 visit to Myanmar. The publisher said he wishes Francis would now mention the general in his statements about the country, "and ask him to protect the lives of people and political prisoners who are being shot and killed by his forces like terrorists."

Vatican | After coup, Myanmar Catholics fear the 'target on our back'

Why are all the comments closed on this site?