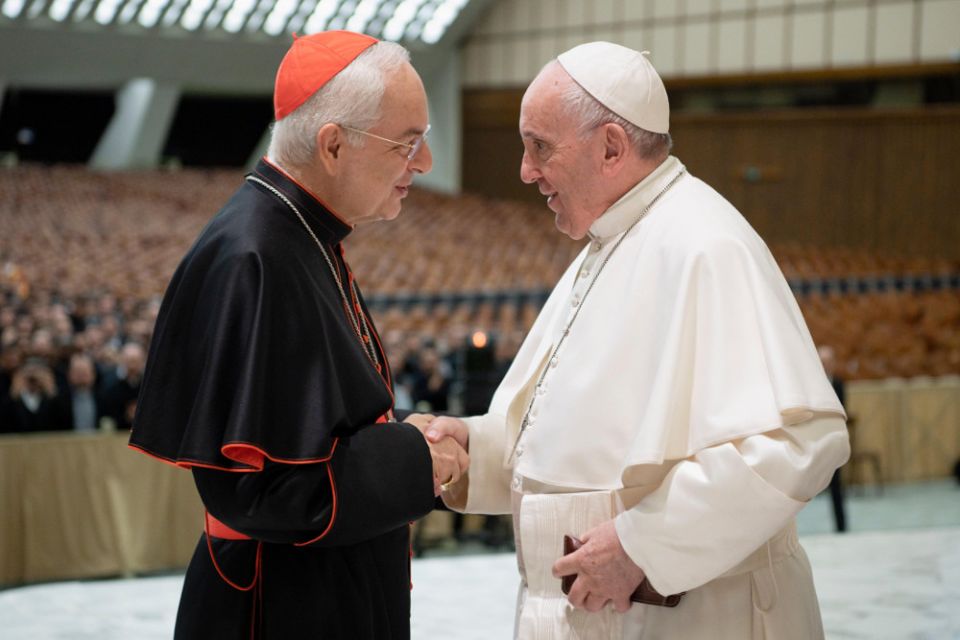 Pope Francis greets Cardinal Mauro Piacenza, head of the Apostolic Penitentiary, a Vatican court, March 29, 2019, in the Vatican audience hall during a meeting with priests and seminarians who had just concluded a course offered by the cardinal's office. (CNS/Vatican Media)

Vatican City — In confession, the privacy of one's conscience before God, also known as the internal forum, must always be protected and not be used to influence decisions outside the confessional, Pope Francis said.

"Please, this is a sin," he said. "It is a sin against the dignity of the person who trusts the priest, who reveals his or her reality in asking forgiveness and is then used to fix something in a group, or perhaps a movement or a new congregation. But the internal forum is the internal forum. It is something sacred."

In his address, the pope emphasized the importance of the course, which trains confessors in carrying out their "ministry of mercy."

This ministry, he said, requires adequate formation so that those seeking God's forgiveness truly experience "a real encounter with salvation in which the Lord's embrace can be perceived in all its strength, capable of changing, converting, healing and forgiving."

Noting the participation of more than 700 priests in the course, Pope Francis said it was a testament to the need for the formation of priests on a matter "that is so important for the life of the church and the fulfillment of the mission entrusted to us by Jesus."

The conference, he added, comes at a unique moment when confession, as well as "the sense of sin," is in crisis.

The participation of so many priests, the pope said, "bears witness to the permanent interest in working together to confront and overcome the crisis, especially with the 'weapons of faith' and offering an ever more qualified service capable of truly manifesting the beauty of divine mercy."

The seal of confession, he continued, is also an important aspect of confession that is essential "for the holiness of the sacrament and for the freedom of conscience of the penitent.

"No human power has jurisdiction, nor claim, over" the sacramental seal, he said.

By faithfully administering the sacrament of reconciliation, as well as by going to confession themselves, priests can walk alongside penitents, the pope said, and "contemplate the miracles of conversion that grace works in the secret of the confessional, miracles of which only you and the angels are witnesses."

Pope Francis said that the sacrament of reconciliation is "a path of sanctification" for both the penitent and the confessor and that it ensures that "the door of the father's house always remain open and that it may always be possible for men and women to return to him."

"We must always remember, and this will help us so much before going to the confessional, that we are first forgiven sinners and, only then, ministers of forgiveness," the pope told them.