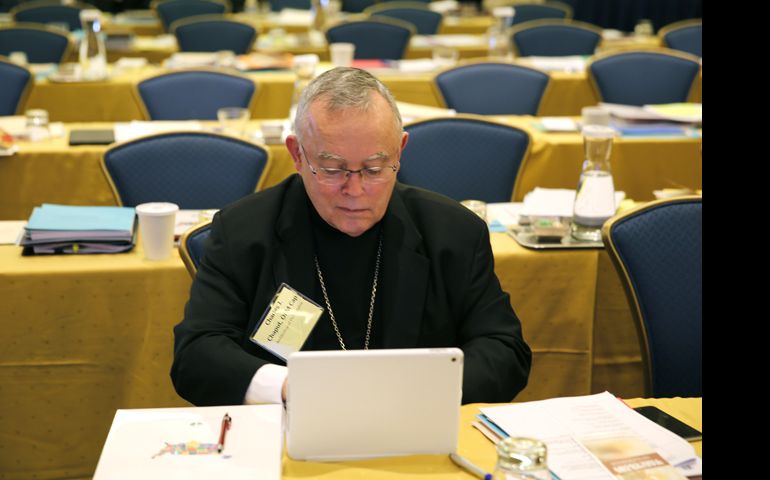 Archbishop Charles J. Chaput of Philadelphia works on his laptop during a break at the 2015 fall general assembly of the U.S. Conference of Catholic Bishops in Baltimore Nov. 17. (CNS/Bob Roller)
This article appears in the USCCB Fall 2015 feature series. View the full series.

Baltimore — The U.S. bishops approved a $24.2 million budget for the work of their national conference in 2016, but their vote was inconclusive on a proposed 3 percent increase in 2017 of the assessment on dioceses that funds the conference.

The $24.2 million represented unrestricted funds available to the U.S. Conference of Catholic Bishops. A separate $190 million budget of restricted funds for 2016 include funds subject to "donor intent" such as federal grants to Migration and Refugee Services and national collections for retired religious or other purposes. A third category of "designated funds" to the USCCB Communications Department projected a loss of more than $850,000 next year.

The three budgets were approved by the bishops in a single voice vote Nov. 17 during their fall general assembly in Baltimore. But a separate written ballot on the diocesan assessment failed to gain the required two-thirds majority of bishops who head dioceses or eparchies.

The vote was 123-49 in favor of the 3 percent increase, and 132 votes were needed to reach the two-thirds majority. Heads of dioceses who were not present at the Baltimore meeting will be polled by mail on the matter.

Bishop Kevin J. Farrell of Dallas, USCCB treasurer and chairman of the bishops' Committee on Budget and Finance, reported to the bishops that the proposed increase amounted to "only $300,000 for the whole conference." For more than half of U.S. dioceses, he said, that would mean a rise of less than $100 a month in their diocesan assessment.

He said the 3 percent increase represented "the minimum that we need to maintain the conference in a sound financial position for the next year."

But he acknowledged that the current formula for assessing dioceses -- which is based on offertory collections, the number of registered households and the amount donated to three national collections -- was outdated and unfair to some dioceses. He said the committee had commissioned the Diocesan Fiscal Management Conference to develop a new formula.

The fiscal managers had made a recommendation for a new formula, based more heavily on offertory collections, but the committee had not had time to study it, said Bishop Farrell, who promised to present it next year before the bishops voted on a diocesan assessment for 2018.

Archbishop Charles J. Chaput of Philadelphia spoke against the increased assessment, saying that dioceses especially in the Northeast are experiencing lower offertory collections and are being forced to cut their budgets.

Bishop Farrell said the new formula would help with that issue. "If the offertory goes up, the assessment goes up," he said. "If the collections go down, then the assessment would go down."

He said the USCCB "needs to have a sustainable income" that does not rely on growth in the conference's long-term investments. "As we have seen between 2008 and 2009, we should not have our fates so heavily dependent on financial markets over which we have no control whatsoever," he added.