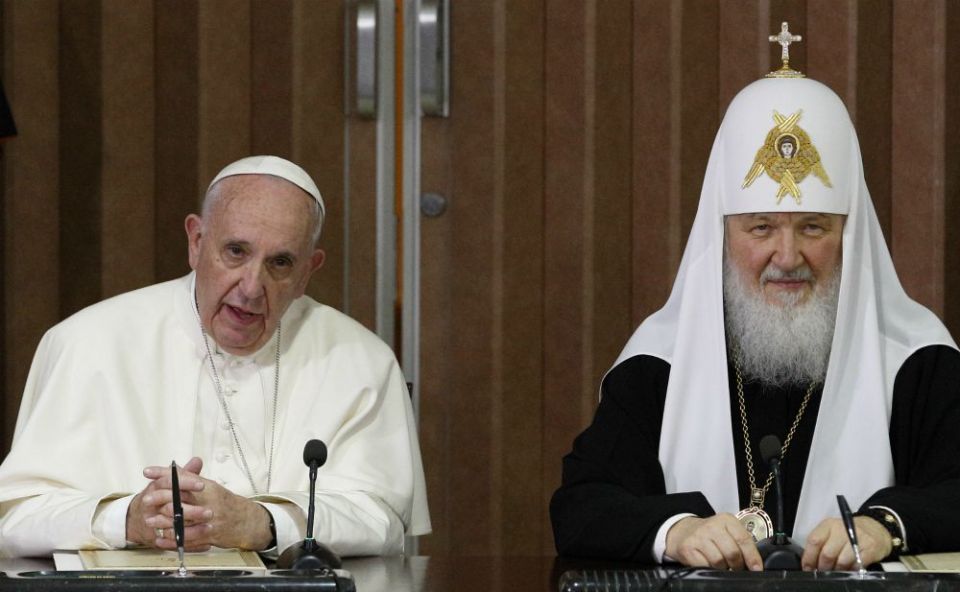 Pope Francis and Russian Orthodox Patriarch Kirill of Moscow attend a ceremony to sign a joint declaration during a meeting at Jose Marti International Airport in Havana Feb. 12. (CNS/Paul Haring)

Rome — The Vatican's Secretary of State has expressed hope that Pope Francis may some day become the first Catholic pontiff to visit Russia.

Cardinal Pietro Parolin, who is preparing for an Aug. 20-24 visit to the country, told Italy's Corriere della Sera newspaper in an interview Tuesday: "Preparation of a possible visit to Russia by the Holy Father Francis lies outside the aims of my visit."*

But Parolin added: "With God's help I hope I can make some contribution in this direction."

No previous pope is known to have visited Russia, at least in the modern era. There have long been tensions between the Catholic Church and the Russian Orthodox Church that had been seen to prevent such a visit.

Francis was the first pope to meet with a leader of the Russian Orthodox, having an encounter with Patriarch Kirill in Cuba in 2016.

Parolin said Aug. 8 he is scheduled to meet while he is in Russia with both Kirill and President Vladimir Putin.

The cardinal said he would be bringing Kirill a "cordial and fraternal" greeting from Francis. Parolin said he expects to speak to the patriarch about how their two churches interact with the "great spiritual, cultural and political themes of our day"

"It is important to look for positive and open ways to continue to weave inter-ecclesial relations so that the churches can constructively contribute to resolving the complex problems that trouble and challenge humanity today," said the cardinal.

"It is my fervent hope, therefore, that the meeting may serve for ever greater knowledge, mutual esteem and collaboration between Catholics and Orthodox," he added.

Asked why he was taking the visit to Russia, Parolin said: "It is important that you take every opportunity to encourage mutual respect, dialogue and reciprocal collaboration, in view of promoting peace."

The cardinal noted that he has previously visited Belarus and Ukraine.

"As on similar occasions, this will permit me to demonstrate the pope's spiritual closeness to the local Catholic community and to meet with the highest Russian authorities for talks on bilateral and international issues," he said.

*This sentence has been corrected to reflect a more accurate translation of Cardinal Parolin's original wording in Italian.

Misconceptions about the meeting of Pope Francis and Patriarch Kirill