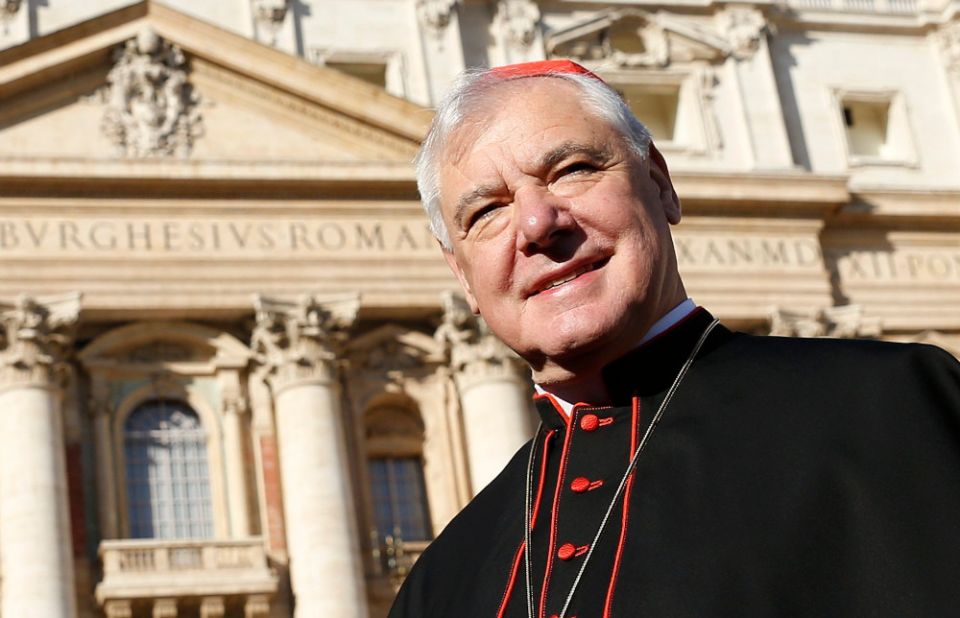 Cardinal Gerhard Müller, prefect of the Congregation for the Doctrine of the Faith, in St. Peter's Square at the Vatican, Nov. 19, 2014 (CNS photo/Paul Haring)

Vatican City — The constant comparison as well as false reports of division between Pope Francis and retired Pope Benedict XVI by both secular and Catholic media outlets threaten the dignity of the papacy and the faith of many, a former top Vatican official said.

In an op-ed piece published Jan. 10 in the Italian daily La Bussola Quotidiana, Cardinal Gerhard Müller, former prefect of the Vatican Congregation for the Doctrine of the Faith, said that with the "visual image of 'two popes' side by side, the subtle problem of comparing the pontificates of two living people has arisen."

He also said that in today's age of "secularized thinking and mass media, political and ideological viewpoints end up contaminating theological judgment" to the point that, for some people, "the tenets of Catholic theology are suspected of 'conservative' or 'liberal' ideology, depending on their point of view."

In addition, "positive evaluations of either pontificate are exchanged at the expense of the opposing side," Müller wrote. "Evidence of this harmful antagonism of the pontificates of two living actors in current history is numerous and is reflected daily in the comments of newspapers, blogs, related web pages and propaganda films."

Since 2013, media outlets have often noted the difference in personal styles and approach to doctrine of Popes Benedict and Francis. For example, the 2019 film "The Two Popes," starring Anthony Hopkins and Jonathan Pryce, highlighted those differences through imagined conversations between the two pontiffs.

Müller's editorial echoed similar concerns raised by Cardinal George Pell, former prefect of the Vatican Secretariat for the Economy, in an interview with the Associated Press Dec. 16.

Pell said the Vatican should further develop norms for the resignation of a pope to avoid the problem that, for ideological reasons, some show deference to one pope while shunning another.

"The unity of the church is not automatic," Pell told the AP. "I haven't found a single person here in Rome who doesn't think there must be protocols for a pope who retires. Obviously, we love the popes, we have great respect for them. But the needs of the situation — the unity of the church — is on another level that goes beyond a personality."

In his editorial, Müller said that Pope Benedict's surprise resignation in 2013 and the subsequent election of Pope Francis brought about an "unknown and even unthinkable situation in the history of the papacy and the church."

Nevertheless, he continued, to this day, many "lack the appropriate form of thought and language" to distinguish between the "heretical idea of a double apex (such as when we speak of two popes)" and the reality that there is "now an 'emeritus' bishop and pope of Rome who no longer holds the Petrine ministry."

"The problem, for the truth of faith, arises from the fact that the bishop of Rome, as the successor of Peter, is the principle of unity that, precisely, must be realized by one person," he said.

The German prelate said that since "there can only be one pope," making a distinction between an "'incumbent' and an 'emeritus' pope — or between the active holder of the Roman primacy and the passive participant — is of little help."

Additionally, he noted, the white cassock or the granting of apostolic blessings are not central features of the papacy.

Instead, what matters most is "the definition of the office of the bishop of Rome, which is inextricably linked to the succession of Peter, along with the Petrine magisterium (the primacy of teaching and jurisdiction)," he wrote.

He also said that accepting a former pope back into the College of Cardinals, as some have suggested, "does not really approach the central problem," which is the link between the office of the bishop of Rome and "his Petrine prerogatives."

Warning of the antagonism that arises from false perceptions of division along ideological lines between the two pontiffs, Müller said that for Catholics, what is "of true spiritual and theological interest" is not the different personal styles of Pope Francis and retired Pope Benedict but rather their shared "concern for Christ's church."

"At stake are both the dignity of the Petrine ministry that a previous pope held and the recognition of his merits for the church, which are to be incorporated into reflections of his ecclesiastical placement," he said.

A version of this story appeared in the Feb 5-18, 2021 print issue under the headline: Papal division narrative 'harmful,' former doctrinal chief says .

When appointing new cardinals, will Francis follow tradition or continue to surprise?

Cardinal Connell of Dublin dies at 90