Francis' Africa trip a visit to those 'most suffering,' push for peace 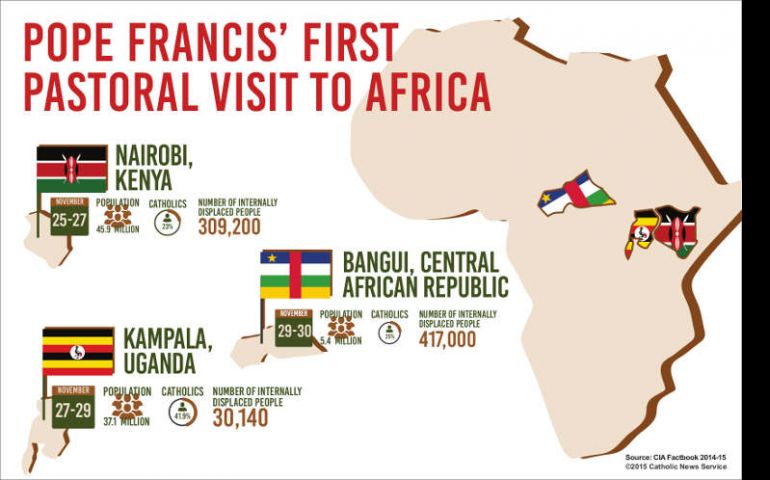 Rome — Pope Francis will embark later this week on a six-day trip to three African nations in a concerted push for inter-religious and inter-cultural efforts favoring peace over conflict and dialogue over entrenchment, even bringing the message to a place many consider an active warzone.

In his first trip to the continent, the pontiff will depart Wednesday for Kenya before heading to Uganda and then the Central African Republic.

The last stop of the visit, where Francis is scheduled to stay in the capital of Bangui for only one night, has prompted a host of questions about the pope's security given continual violent clashes there between largely Muslim and Christian armed factions.

Responding to concerns on that matter during a briefing Thursday, Vatican spokesman Jesuit Fr. Federico Lombardi said the Vatican is monitoring the situation in the country and has even taken the extraordinary step of sending one of its main security officials ahead of the pope to assess the issue.

Despite the concerns, Catholic leaders with deep backgrounds in each of the countries to be visited by the pope during his Nov. 25-30 African journey said his time in the Central African Republic would have high symbolic value for that country and for the entire region.

"The trip of the pope to Bangui will be, above all, a great consolation for a Republic that feels so forgotten by the whole world," said Fr. Jean-Claude Nzembele, who has worked in the country intermittently since 1994.

"It is hoped that with the visit of the Holy Father the world will realize the existence of this Republic that so few people know, that they will realize what has happened there, [and] that the international community will help to find effective solutions," said Nzembele, the superior general of the international order of Apostles of Jesus Crucified.

Before taking up his current role, Nzembele served as the head of his order in the Central African Republic, as the head of an umbrella group for religious in the country, and as the leader of the Confederation of the Conferences of the Major Superiors of Africa and Madagascar.

The religious order priest described the situation in the country, located on the continent between South Sudan and Cameroon, as fairly dire. He said the largely Muslim anti-government rebel group known as Seleka brought much destruction when it took over many local villages in 2012 and 2013, leading to its seizure of the capital.

That destruction led to the formation of a largely Christian militia to fight Seleka, known as the anti-Balaka. The two groups signed a ceasefire in July 2014, but skirmishes continue. The country is under control of a transition government that is supposed to hold elections by December.

Security in the nation is being provided by a 10,000-strong United Nations force known as MINUSCA.

Said Nzembele: "From the pope is hoped a word of consolation for all."

Assuming the visit goes forward, Francis will have the opportunity to discuss the situation upon landing in Bangui Nov. 29. After arrival, he is to meet with the head of the transition government, Catherine Samba-Panza, and other political leaders.

The Vatican said the pontiff's remarks at that occasion in the francophone nation will be given in French, his first public speech in that language.

The pontiff is scheduled also to push for inter-religious work towards peace in the nation the next day in a morning meeting with the city's Muslim community at its main mosque in Bangui.

The pope's speeches and homilies in the Central African Republic will be among 19 he is to give during the six days of the Africa trip, which will see him greet the political leaders and Catholic bishops in each country. He also to deliver what Lombardi called a "major address" to U.N. offices in Nairobi, Kenya Nov. 26.

One Kenyan bishop said he the thought the pope's visit there Nov. 25-27 could "mark a change in the life of many."

"In the newspaper already he is featured as the Pope who loves the poor [and] visiting a slum area in Kangemi [will] for sure be appreciated by many," he said, referencing a visit the pope is to make Nov. 27 to a slum neighborhood outside Nairobi that is home to an estimated 100,000 people.

Francis will land in Nairobi from Rome Nov. 25 and will meet then with Kenyan president Uhuru Kenyatta, the son of the country's first president, Jomo Kenyatta.

Barbara, whose diocese is about 300 miles east of Nairobi, said he also hoped Francis would use his meeting with the Kenyan episcopate to "speak about unity among the Bishops in front of national problems."

The bishop said via email he thinks the pope might stress the need for Kenyan priests and religious to be "living authentically and faithfully their consecration, and to the whole Kenyan church to make a real option for the poor."

Francis's speech Nov. 26 at Nairobi's UN office -- where both the UN Environment Program and the UN Human Settlements Program are headquartered -- will be "a golden occasion to develop his stand on the future of our world, especially the world of the poor," said Barbara.

"He did this in his encyclical Laudato Si'; now he continues to hammer his Christian view on the environment," said the bishop.

Francis will land in Uganda the afternoon of Nov. 27, where he will meet with President Yoweri Museveni, who has led the country since 1986. The next day the pope will visit separate Anglican and Catholic shrines to 45 19th-century Christian martyrs, and will celebrate a Mass in the area of the Catholic shrine.

Sr. Pauline Acayo, a native Ugandan who is now a Catholic Relief Services official in Kenya, said she hoped the pontiff would use his time in her native country to "remind the bishops, priests, religious of our responsibility to protect the poor, orphans and homeless."

Acayo, a member of the Little Sisters of Mary Immaculate from Gulu, Uganda who is internationally recognized for her work training Ugandan women to participate in civil society and promote forgiveness and reconciliation, said she hoped Francis will also urge Museveni to protect natural resources.

"I expect the pope to raise the issue of the principle of subsidiarity, which gives freedom for the development of the capacity that exists at all levels, but at the same time calls for more responsibility to the common good on the part of those who hold the most power," she said.

Asked about the symbolism of the pope visiting the three African countries together, Acayo said "he desires to visit the most suffering and give hope to people of these countries which have experienced a lot of internal and external conflicts."

"The visit might bring hope to those who have lost their love ones and [make] unity among the three countries," she said.

This is Francis' 11th trip outside Italy since becoming pontiff in March 2013. He has visited: Brazil, Israel, Jordan, Palestine, South Korea, Albania, the E.U. headquarters in France, Turkey, Sri Lanka, the Philippines, Bosnia and Herzegovina, Bolivia, Ecuador, Paraguay, Cuba, and the United States.

Mexican church and government officials say he will visit their country in February, but the Vatican has not confirmed that visit.

Vatican | Francis' Africa trip a visit to those 'most suffering,' push for peace

Christians (and others) under threat