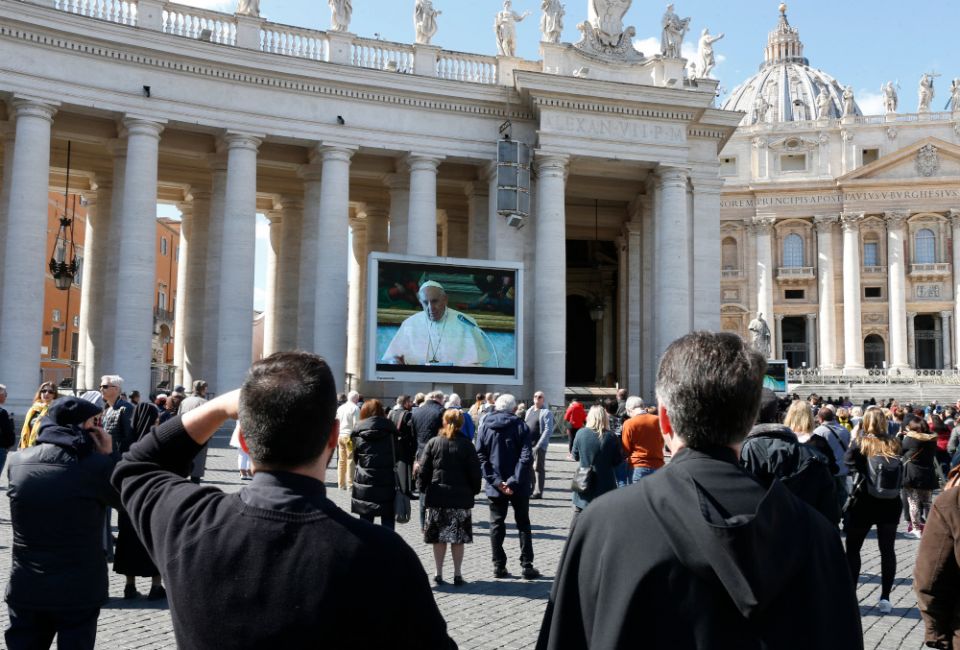 Pope Francis is pictured on a video monitor in St. Peter's Square as he leads the Angelus from his library in the Apostolic Palace at the Vatican March 8, 2020. As a precaution to avoid spread of the coronavirus, the pope's Sunday Angelus was broadcast on television and displayed on monitors in St. Peter's Square. After leading the Angelus through video the pope said he wanted to see the crowd in "real time" and came to the window of his studio to greet people in the square. (CNS/Paul Haring)

Vatican City — Pope Francis did not recite the Sunday Angelus from the window of his studio overlooking St. Peter's Square March 8, but he did go to the window to wave and to bless the pilgrims who showed up anyway.

The Vatican had announced the day before that the Angelus prayer and the pope's weekly general audience March 11 would be livestreamed from the papal library "to avoid the risk of spreading the COVID-19 (coronavirus)," especially given the crowding that occurs at the security checkpoints on entering the square.

The Italian government and Vatican City State health services have asked people throughout Italy to avoid large gatherings, particularly indoors, and to keep a yard's distance between people in public in the hopes of slowing the spread of the virus.

Following the lead of the Italian government, the Vatican also announced March 8 that the Vatican Museums, the necropolis under St. Peter's Basilica and the papal villa at Castel Gandolfo would be closed until April 3 to reduce situations where people crowd together.

Francis began his Angelus address acknowledging that "it's a bit odd, today's Angelus prayer with the pope 'caged' in the library," but he said he could see there were people in the square and he was with all those who were praying with him.

"I am close in prayer to the people who are suffering from the current coronavirus epidemic and all those who are caring for them," the pope said. "I join my brother bishops in encouraging the faithful to live this difficult moment with the strength of faith, the certainty of hope and the fervor of charity."

"May this season of Lent help us give everything a Gospel sense, even this moment of trial and suffering," Francis said.

After his Ash Wednesday services Feb. 26, Francis began cancelling events because of a cold, according to the Vatican press office. While he was not coughing during the Angelus March 8 and while his voice was not as hoarse at it had been, the microphone did pick up the sound of wheezing.

The tradition of the pope reciting the Angelus with visitors in St. Peter's Square began with Pope Pius XII in the fall of 1954; he had done a special radio broadcast of the Angelus on the feast of the Assumption, Aug. 15, that year and decided it was a practice he wanted to expand.

Since then, the popes have kept the Sunday noon appointment except when they were traveling or, in the case of St. John Paul II, when he was hospitalized. However, even after being shot May 13, 1981, he recorded a brief message broadcast in St. Peter's Square.

In his main Angelus address March 8, Francis spoke about the day's Gospel account of the Transfiguration.

Jesus took Peter, James and John up Mount Tabor with him; "the privilege of being at the Transfiguration was reserved to them" and not all twelve apostles, the pope noted. "But why the choice of these three? Were they holier? No. Peter, at time of trial would deny him. And the two brothers, James and John, would ask to have the first places in his kingdom."

"Jesus does not choose according to our criteria, but according to his plan of love," the pope said. "Jesus' love has no limit."

"It was a gratuitous choice, without condition, a free initiative, a divine friendship that asked nothing in return," Francis said. "And as he called those three disciples, today he still calls some to be close to him in order to give witness."

"Being witnesses of Jesus is a gift that we have not deserved," the pope said. "We feel inadequate, but we cannot withdraw with the excuse of our incompetence."

People often are tempted to say that they are too busy to pray or to help out in the parish or to assist a neighbor in need, the pope said. "But we must not forget that the baptism we received makes us witnesses, not because of our own abilities, but by the gift of the Spirit."