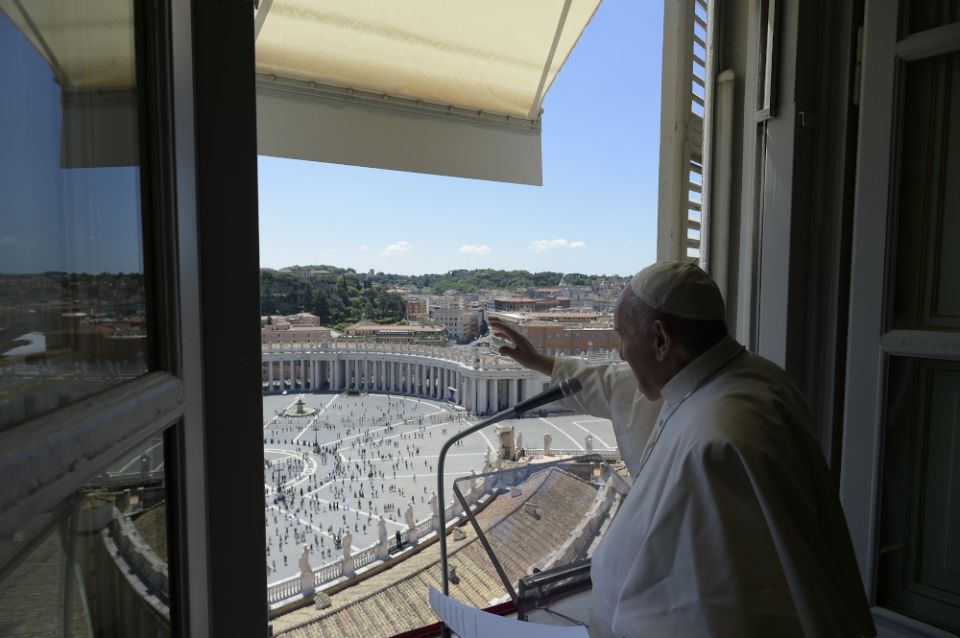 Pope Francis greets the crowd as he leads the "Regina Coeli" from the window of his studio overlooking St. Peter's Square at the Vatican May 31. (CNS/Vatican Media)

Vatican City — Just as the apostles were united once they received the Holy Spirit, the church is united by that same spirit and not by keeping company just with those who agree on a certain interpretation of Christian teaching, Pope Francis said on Pentecost.

Celebrating Mass May 31 in St. Peter's Basilica, the pope said that those who give in to the temptation to fiercely "defend our ideas, believing them to be good for everybody and agreeing only with those who think as we do," adhere to a faith created in their own image and "not what the Spirit wants."

"We might think that what unite us are our beliefs and our morality. But there is much more: Our principle of unity is the Holy Spirit. He reminds us that, first of all, we are God's beloved children. The Spirit comes to us, in our differences and difficulties, to tell us that we have one Lord — Jesus — and one Father, and that for this reason we are brothers and sisters," he said.

In February, the Vatican had announced that the pope would celebrate Pentecost in Malta. However, the trip was canceled due to the coronavirus, and instead he celebrated the Mass with a limited congregation present at the basilica's Altar of the Chair.

After celebrating Mass, the pope spoke to the socially distanced faithful gathered in St. Peter's Square before praying the "Regina Coeli." It was the first time the pope addressed the faithful from the window of the Apostolic Palace since lockdown measures forced an end to all public gatherings.

"Today, now that the square is open, we can return here. It is a pleasure" to see you, the pope said.

Reflecting on the feast of Pentecost, the pope said the coming of the Holy Spirit turned the lives of the apostles "upside down" and made them "courageous witnesses" to Christ's death and resurrection.

"The feast of Pentecost renews the awareness that the life-giving presence of the Holy Spirit dwells in us," he said. "He also gives us the courage to go outside the protective walls of our 'cenacles,' without resting in the quiet life or locking ourselves up in sterile habits."

The pope also recalled the seven-month anniversary of the conclusion of the Synod of Bishops for the Amazon and offered prayers for the people of the Amazon region where the pandemic, along with deforestation and pollution, have added to the suffering of indigenous people.

"I make an appeal so that no one may lack health care assistance. Take care of people; don't save up for the economy. Care for people who are more important than the economy. We, the people, are temples of the Holy Spirit, the economy isn't," the pope said.

Earlier, in his homily at Mass, the pope reflected on the second reading from St. Paul's First Letter to the Corinthians, in which the apostle says that the church, while composed of many different parts, is one body.

Despite the many differences and difficulties, the pope said, the Holy Spirit is what unites the church's members as brothers and sisters. He also called on Catholics to "look at the church with the eyes of the Spirit and not as the world does."

"The world sees us only as on the right or left; the Spirit sees us as sons and daughters of the Father and brothers and sisters of Jesus," he explained. "The world sees conservatives and progressives; the Spirit sees children of God. A worldly gaze sees structures to be made more efficient; a spiritual gaze sees brothers and sisters pleading for mercy."

Francis said that the secret to unity is that it is a gift of the Holy Spirit and that it is important to understand that God "acts not by taking away, but by giving."

"Why is this important?" the pope asked. "Because our way of being believers depends on how we understand God. If we have in mind a God who takes away and imposes himself, we, too, will want to take away and impose ourselves: occupying spaces, demanding recognition, seeking power."

"But if we have in our hearts a God who is gift, everything changes. If we realize that what we are is his gift, free and unmerited, then we, too, will want to make our lives a gift," he said.

The pope also warned Christians of the "three enemies" of God's gift that lurk "at the door of our hearts" and impede people from giving themselves to others.

The first enemy, narcissism, "is the tendency to think only of our own needs, to be indifferent to those of others and not to admit our own frailties and mistakes." However, victimhood, the second enemy, is "equally dangerous," because people close their hearts and are concerned only with their own sufferings.

Pessimism is the final enemy, and it sees everything in "the worst light" and repeatedly says that nothing will return as before.

"When someone thinks this way," the pope said, "the one thing that certainly does not return is hope. We are experiencing a famine of hope, and we need to appreciate the gift of life, the gift that each of us is. We need the Holy Spirit, the gift of God who heals us of narcissism, victimhood and pessimism."

Even when she struggled, Mary believed