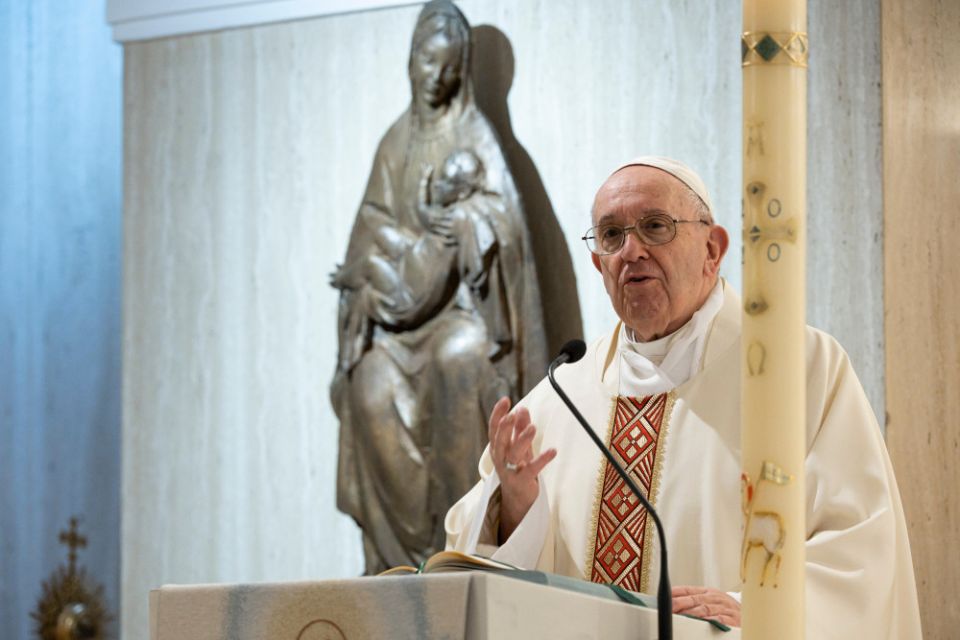 Pope Francis gives the homily during his early morning Mass May 5, 2020, in the chapel of the Domus Sanctae Marthae at the Vatican. The pope began the Mass praying for those who have died from COVID-19 "alone, without the caress of their loved ones - many of them - without even a funeral." (CNS/Vatican Media)

Clericalism, rigidity and an attachment to wealth can enslave Christians and impede them from fully knowing Jesus, the pope said in his homily May 5 during his early morning Mass in the chapel of his residence, the Domus Sanctae Marthae.

The common thread among those impediments is that "there is a lack of freedom, and one cannot follow Jesus without freedom," he said.

The pope began his livestreamed Mass by offering prayers for those who have died from COVID-19.

"They died alone, without the caress of their loved ones — many of them — without even a funeral. May the Lord welcome them into his glory," he said.

In his homily, the pope reflected on the day's Gospel readings from St. John in which the Jews ask Jesus to confirm whether he is the Messiah.

Among the stumbling blocks that impede people from truly knowing Christ is wealth, as evidenced by Jesus' assertion that "it is easier for a camel to pass through the eye of a needle than for a rich man to enter the kingdom of heaven," the pope said.

"Riches are an impediment to moving forward. Should we fall into pauperism? No, but don't be a slave to wealth, do not live for wealth because wealth is a lord, it is the lord of this world and we cannot serve two masters. Wealth stops us," he said.

A rigidity of heart that seeks a strict interpretation of the law, the pope continued, is another impediment. While faithfulness to God is a gift, "rigidity is a security for myself."

The pope recalled a conversation with a woman who feared that she was in mortal sin because she did not go to Sunday Mass after attending a wedding Mass on Saturday evening.

While acknowledging that she was "a good woman" who belongs to a church movement, the pope said that her rigidity deprived her of freedom and "the wisdom of Jesus."

There are "many pastors who make this rigidity grow in the souls of the faithful, and this rigidity does not let us enter through the door of Jesus. Is it more important to observe the law as it is written or as I interpret it, which is the freedom to go forward following Jesus?" he asked.

Clericalism, especially in the Catholic Church, "is a disease" that "takes away the freedom of believers' faith," the pope added.

"These are the things that stop us from being part of Jesus' flock," Francis said. "May the Lord enlighten us to see within us whether there is the freedom to pass through the door that is Jesus and to go to him to become sheep in his flock."