On the cross, God's loving nature is revealed, pope says 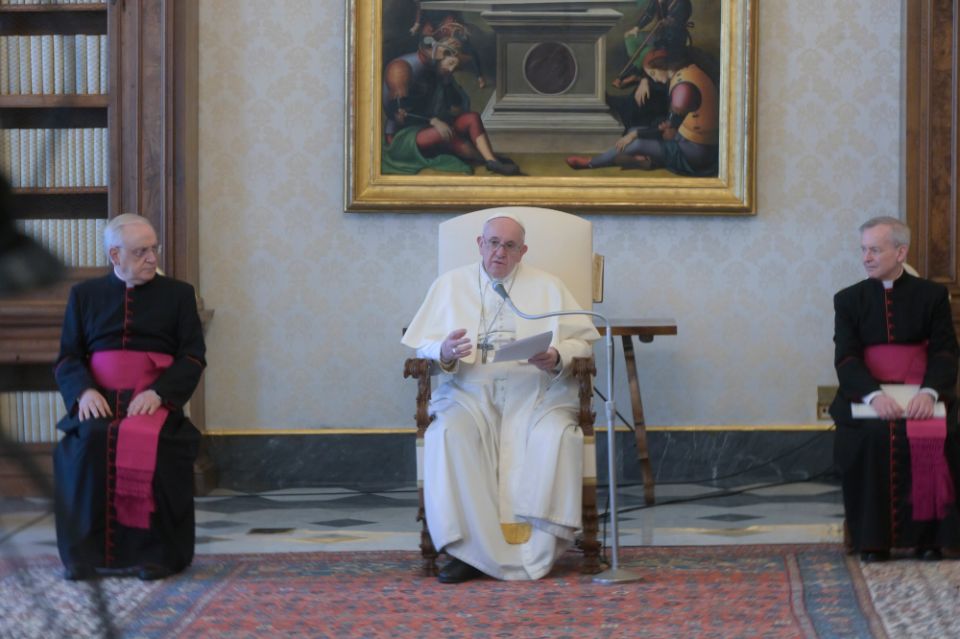 Pope Francis speaks during his general audience as it is livestreamed from the library of the Apostolic Palace at the Vatican April 8, 2020. (CNS/Vatican Media)

Vatican City — Jesus chose to reveal his divine majesty not through miracles or wondrous deeds but on the cross where God's love for humanity was manifested, Pope Francis said.

Throughout his ministry, Christ walked away when people wish to proclaim him king and silenced demons he exorcised when they wanted to reveal his true nature because "he does not want people to confuse the true God, who is humble love, with a false god, a worldly god who puts on a show and imposes himself by force," the pope said April 8 during the live broadcast of his weekly general audience.

Instead, his identity is displayed at the moment of his death, like the centurion proclaimed: "Truly was the Son of God."

After Jesus gave his life on the cross, "one can no longer be mistaken; one sees that God is omnipotent in love and not in any other way. It is his nature; he is made that way. He is love," the pope said.

Francis used his audience talk to reflect on the questions people ask themselves, especially about God, at a time when the fear and suffering brought on by the coronavirus pandemic can be overwhelming.

What does God "do in the face of our pain? Where is he when everything goes wrong? Why doesn't he solve our problems quickly?" the pope asked.

The same kinds of questions come up during Holy Week and its focus on Christ's passion and death, from his triumphant entrance into Jerusalem to the moment when the same people who praised his arrival called for his crucifixion.

"Those who followed him, confused and frightened, abandoned him. They thought, 'If this is Jesus' fate, then he is not the Messiah because God is strong and invincible,'" the pope said.

Yet, the Roman centurion's words after his death affirmed the opposite; "he says that God is truly there," he said.

"We can ask ourselves today, 'What is the true face of God?' Usually we project onto him what we are to the utmost power: our success, our sense of justice and even our outrage," the pope said.

"But the Gospel tells us that God is not like that," he continued. "He is different and we could not know him with our own strength. That is why he came close to us, he came to meet us and precisely at Easter, he revealed himself completely. Where? On the cross."

Francis said that the cross "is God's throne" where he reveals his love for all men and women not by pointing "his finger at anyone but by opening his arms wide open to everyone."

Jesus is the one "who does not crush us with his glory but allowed himself to be stripped for us; who does not love us with words but gives us life with silence; who does not force us but frees us; who does not treat us as strangers but takes upon himself our evil, our sins," the pope said.

The image of God