Culture of care is essential for the common good, pope tells doctors 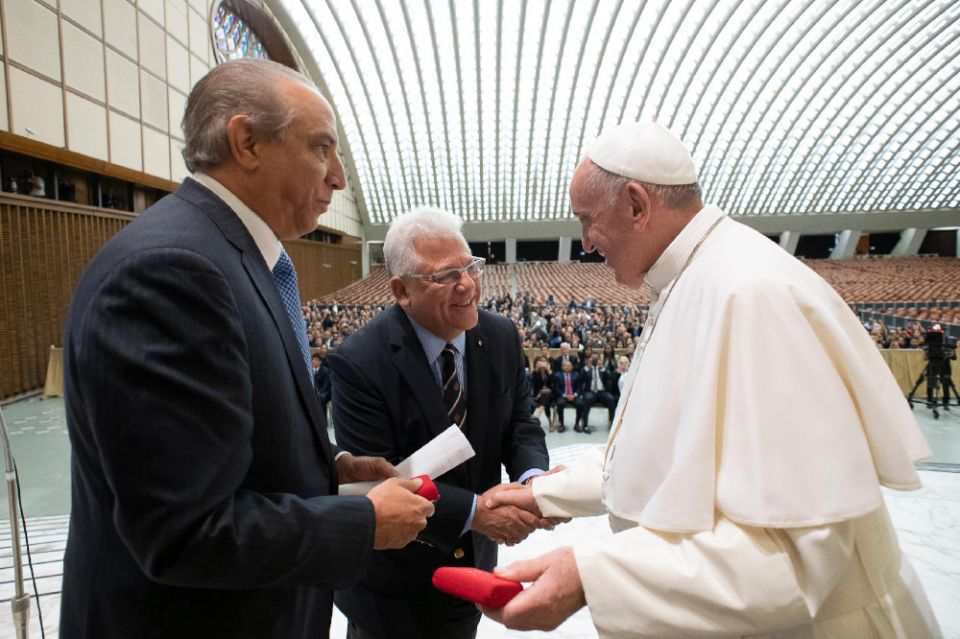 Pope Francis greets Dr. Ramon Tallaj, founder and chairman of the board of Somos Community Care, and Mario J. Paredes, chief executive officer, during a Sept. 20, 2019, symposium at the Vatican on the health care needs of immigrants. (CNS photo/Vatican Media)

Vatican City — With so many changes and huge technological advancements in the field of medicine, health care must always be at the service of the whole individual, including a supportive relationship between patient and medical professionals, Pope Francis said.

People facing illness must be accompanied "conscientiously, with intelligence and heart," recognizing their dignity and fragility, he said Sept. 20 during an audience with members of the Italian Federation of Medical-Surgical and Dental Associations.

"By its definition, medicine is serving human life," which sees the integral whole of the person, including their spiritual-material and individual-social aspects, he said.

It is precisely because of their belief in this truth that they are rightly concerned about the "hidden dangers today's medicine is exposed to," he said.

They must resist temptations — led in part by policies making it legal — "to use medicine to support a possible desire for death by the person who is ill, providing assisted suicide or directly causing death with euthanasia," the pope said.

Such choices are not expressions of the person's freedom when they include the possibility of "discarding" the ill or the false compassion of helping people hasten their death, he said.

The pope said doctors must relate to patients as people who have an illness, not as "a case of a certain illness."

Each clinical case must become a personal encounter, he added.

Francis repeated that message later the same day, when he met participants in a symposium promoted by Somos Community Care on immigrant families and their health care needs. 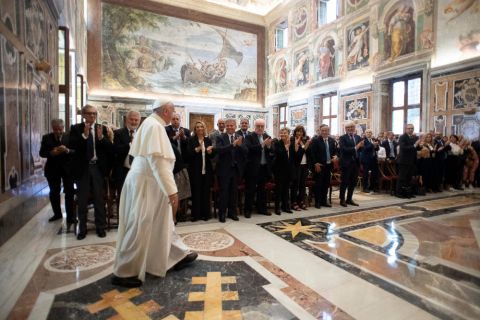 Pope Francis arrives for an audience with members of the Italian Federation of Medical-Surgical and Dental Associations at the Vatican Sept. 20, 2019. The pope encouraged doctors to recognize the dignity and fragility of their patients and to build a supportive relationship with them as people, not medical cases. (CNS photo/Vatican Media)

Somos is a New York City-based network of physicians whose patient-centered approach focuses on building trust through sharing a common language and culture. Doctors also try to address social and environmental factors that may affect well-being.

The pope praised Somos' approach and its commitment to people who "live on the margins of society in situations of poverty and hunger."

This kind of "personal engagement" must be encouraged in a society that displays extreme individualism, utilitarian mindsets or indifference, he said.

"Your daily commitment is aimed at opposing that throwaway culture" and supporting the overall care of the person, he said.

"This solidarity with the sick is a real treasure and is a distinctive sign of a care and authentic health assistance that place the person and their needs at the center," he added.

"Even though not all medical interventions lead to physical healing, health care offered with a human heart will always have the capacity to do good to life, in body and spirit."

The best, most effective kind of health care assistance is "when it is animated by love. And, through daily gestures, this style makes the culture of care flourish as an essential element of the common good," the pope said.

Vatican | Culture of care is essential for the common good, pope tells doctors

Half of US states consider right-to-die legislation

A woman's right to choose?