The devil is a big loser, but he still manages to trick people, pope says 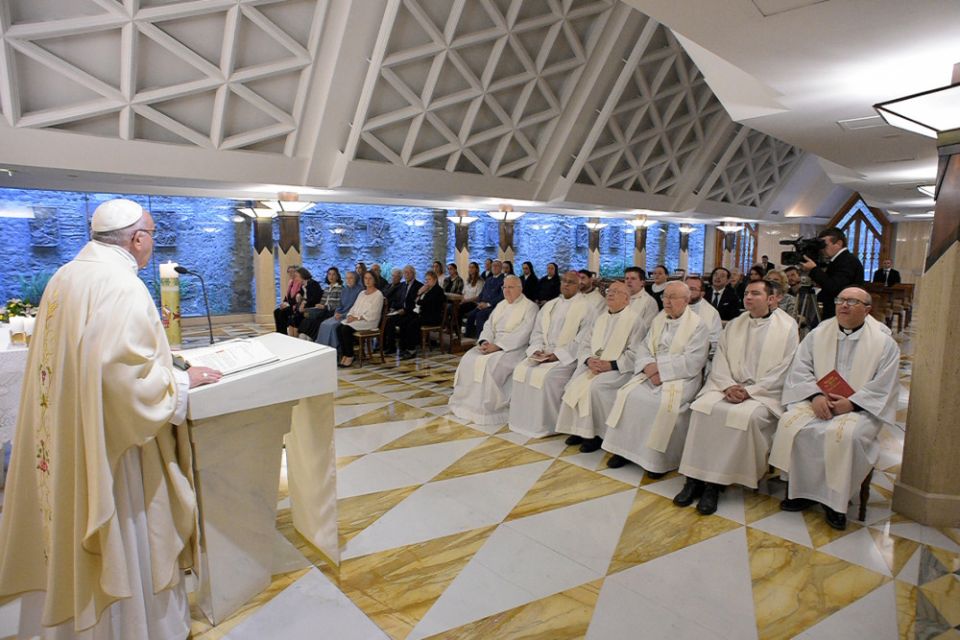 Pope Francis gives the homily as he celebrates morning Mass in the chapel of the Domus Sanctae Marthae at the Vatican May 8. The pope cautioned people to stay away from the devil, likening him to an angry, rabid dog that is chained up. (CNS/Paul Haring)

Vatican City — The devil is "a loser," but he still tricks people into giving him power, Pope Francis said.

The devil "seduces us; he knows how to appeal to our vanity and curiosity and we buy it all," the pope said May 8 during his homily at Mass in the chapel of the Domus Sanctae Marthae where he lives.

The day's Gospel passage from St. John ends with Jesus telling his disciples "the ruler of this world has been condemned."

The phrase refers to the devil, Pope Francis said. With the resurrection of Jesus, the devil has been defeated, but he still pretends to have power and still tries to influence people.

"He has this ability to seduce," the pope said. "That makes it hard to understand that he is a loser because he presents himself with great power, promises you many things, brings you gifts — beautiful, all wrapped up," he said. "He knows how to seduce us with the package without letting us see what's inside. He knows how to present his proposals to appeal to our vanity, our curiosity."

Unfortunately, he said, too often "we like being seduced."

The devil is "the great liar, the father of lies," the pope said, "and we fools believe him."

"We must be aware of the devil," he said, and Jesus taught his disciples that the only way to do that was to watch, pray and fast.

And, Pope Francis said, it's especially important that Christians don't think they can approach the devil, see what he's like and then just walk away unscathed.

As one of the fathers of the church wrote, the devil is like an angry, rabid dog that is chained up, he said.

People know when they are playing with fire, the pope said. They know when they are approaching that angry dog. "Please, don't," he said, before imagining a dialogue in which someone cries about having been bitten, but it turns out the dog was chained up and he had approached it, basically provoking the injury.

One who is afraid of the devil's influence can always turn to Mary, he said. "When children are afraid they go to their mother. 'Mom, mom, I'm afraid.' When they have bad dreams, they go to mom. Go to the Blessed Mother; she protects us."

Vatican | The devil is a big loser, but he still manages to trick people, pope says