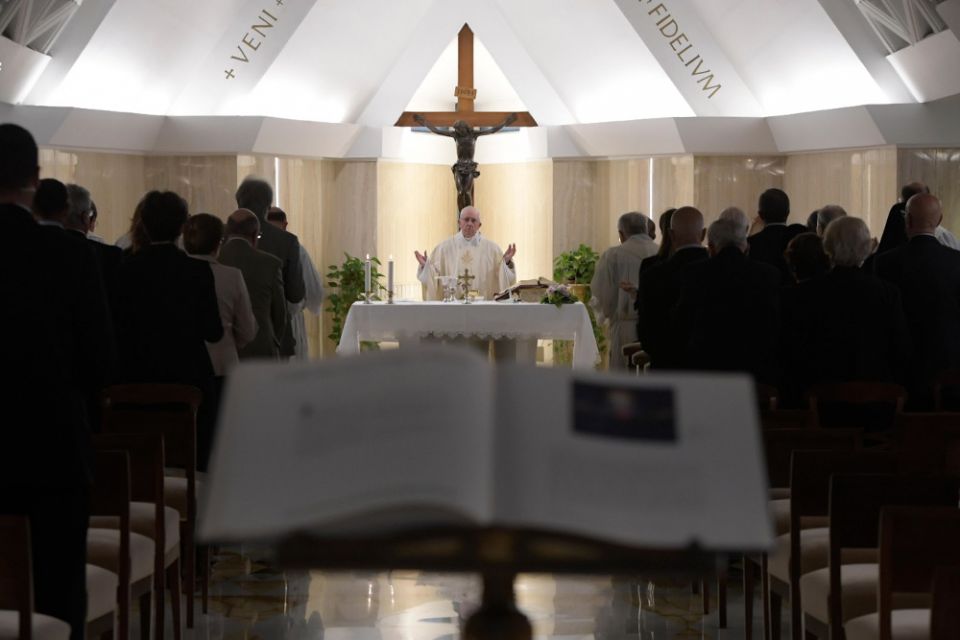 Pope Francis celebrates morning Mass in the chapel of his residence, the Domus Sanctae Marthae, at the Vatican Sept. 13. (CNS/Vatican Media)

Vatican City — The devil is more dangerous when he is polite and friendly, persuading people to be "lukewarm" and worldly, than when he shows his true face and blatantly pushes people to sin, Pope Francis said.

The vocation or "nature of the devil is to destroy" what God has created, the pope said Oct. 12 in his homily during morning Mass in the Domus Sanctae Marthae.

When the devil is unable to destroy something directly, through conflict or vices, he looks for another, sneakier way to attack because he is "slier than a fox," the pope said.

The battle between good and evil is being fought even inside each person, "perhaps unbeknownst to us, but we are in battle," he said.

"We Christians, Catholics, we go to Mass, pray," admit to having some flaws and recognize a few "little sins, but all seems to be in order," the pope said.

That is when the devil puts on a friendly face, "he goes and looks for a nice-looking clique, knocks on the door, 'Hello? May I come in?' He rings the doorbell," Pope Francis said, reflecting on the day's Gospel reading (Lk 11:15-26). The passage talks about an unclean spirit that is cast from his "home" and then "brings back seven other spirits more wicked than itself" to move back in and make the person's situation worse than before.

"These well-mannered demons are worse than the first because you don't realize that you have them there at home," inside oneself, he said.

These demons, "don't make noise, they make friends, they persuade you," convincing people that it is OK to become mediocre, "lukewarm" and worldly.

"So often I ask myself, which is worse in a person's life," the devil trapping people into obvious sin, which leads them to feel ashamed, or a well-mannered devil who "is at your table, lives with you and all seems normal, but he makes insinuations and possesses you with the worldly spirit?" he asked.

Therefore, the pope said, people need to be calmly vigilant against falling into "spiritual mediocrity," which "corrupts us from within."

People must ask themselves: "What is happening in my heart? Why am I so mediocre? Why am I so lukewarm? How many polite ones live at home without paying rent?"

Vatican | Devil destroys overtly or slyly by pretending to be a friend, pope says