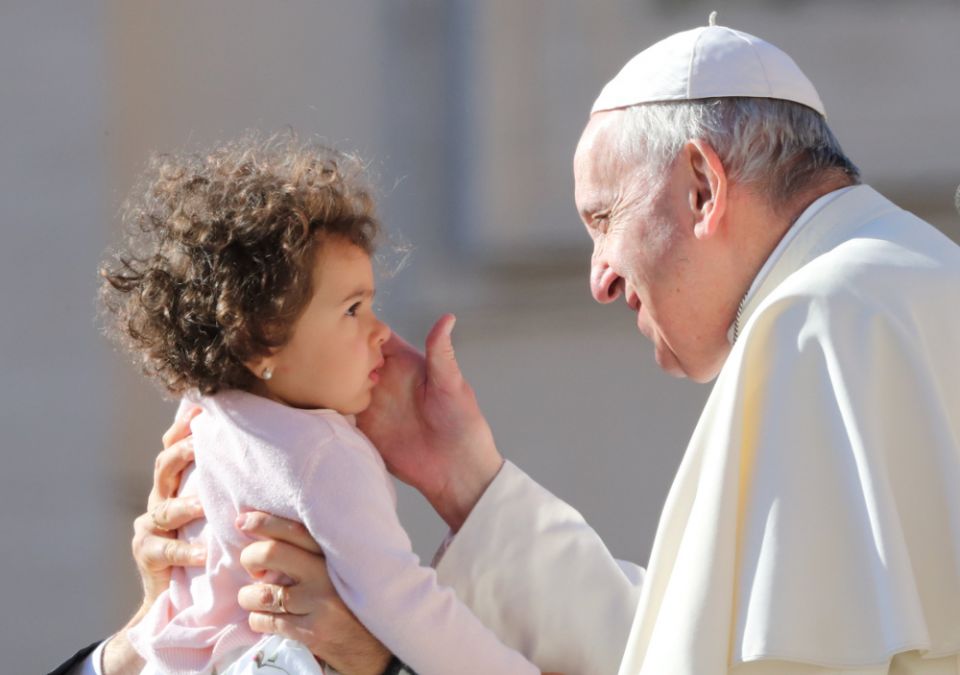 Pope Francis blesses a baby as he arrives to lead the Sept. 26 general audience in St. Peter's Square at the Vatican. (CNS/Tony Gentile, Reuters)

Vatican City — During times of freedom or persecution, the Gospel is needed to bring meaning, fullness and hope to life, Pope Francis said.

Speaking about his Sept. 22-25 visit to Lithuania, Latvia and Estonia, the pope said he visited these Baltic nations as they celebrated the 100th anniversary of their declarations of independence.

However, during these past 100 years, these countries have experienced "the yoke of occupation," beginning with the Nazis and then the Soviet Union, the pope said at his general audience in St. Peter's Square Sept. 26.

During his visit, the pope paid homage to the Jewish victims of the Holocaust in Lithuania, which saw more than 95 percent of its Jewish population murdered, and he visited a former Soviet KGB headquarters that is now a museum dedicated to victims of genocide, foreign occupations and political resistance.

"I stopped in prayer in the rooms where opponents of the regime were detained, tortured and killed. They killed 40 people, more or less, a night," he said, noting how upsetting it was to see how cruel human beings could be. "Let us think about that."

The situation in Lithuania, Latvia and Estonia is very different now compared to when St. John Paul II visited in 1993, "therefore, my mission was to newly proclaim to these people the joy of the Gospel and the revolution of mercy, of tenderness because freedom (by itself) is not enough to give meaning and fullness to life without love, the love that comes from God."

During difficult, trying times, he said, the Gospel "gives strength and enlivens the struggle for freedom."

During times of freedom, he added, the Gospel "is the light" showing the way for people's daily journey, and it is "the salt" giving ordinary life flavor and preserving it from "the corruption of mediocrity and selfishness."

A strong sign of the Gospel being alive is seeing concrete works of charity, he said.

Even where secularization has hit hardest, the pope said, "God speaks with the language of love, of care, of selfless service to those who are in need. And then hearts open up and miracles happen. In deserts, new life blooms."

Vatican | God's love in charity exists even in most secularized places, pope says