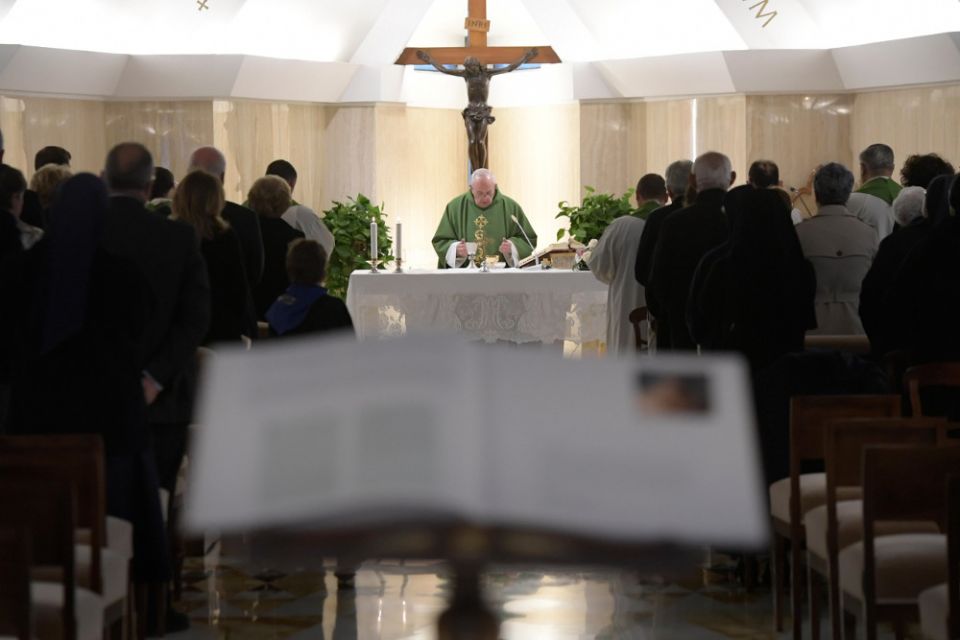 Pope Francis celebrates morning Mass in the chapel of his residence, the Domus Sanctae Marthae, at the Vatican Feb. 28, 2019. (CNS/Vatican Media)

Vatican City — Christians must not take advantage of God's forgiveness — selfishly repeating sin after sin — because God's wrath for those who refuse to change their ways is just as great as his mercy, Pope Francis said in a morning homily.

"Do not say, 'God's compassion is great, he will forgive my many sins' and then I just keep going on, doing what I want," he said Feb. 28 at morning Mass in the chapel of his residence, the Domus Sanctae Marthae.

Pope Francis suggested Catholics spend five minutes at the end of each day examining their conscience, pinpointing their failings and working to conform their life ever more closely to Christ's.

In his homily, the pope reflected on the first reading from the Book of Sirach (5:1-8) in which the Jewish sage warns the faithful against being too overconfident with God, "adding sin upon sin," and delaying conversion because "mercy and anger alike are with him; upon the wicked alights his wrath."

The reading prompted Pope Francis to tell the small congregation at Mass, "Do not wait to convert yourself, to change your life, to perfect your life, to remove the weeds."

Wisdom, he said, is something that grows through daily use and through reflection on one's actions and controlling one's passions, he said.

"Passion is not a bad thing; it is, let's say, the 'blood' for carrying many good things, but if you are not able to control your passions, they will control you," he said.

Taking five minutes at the end of every day to reflect and to examine one's conscience, he said, "will help us a lot to think and to not put off a change of heart and conversion to the Lord."

No one knows when his or her hour will come, he said, and God's infinite mercy does not mean people can keep doing what they want.

Vatican | God's wrath is just as great as his mercy, pope says