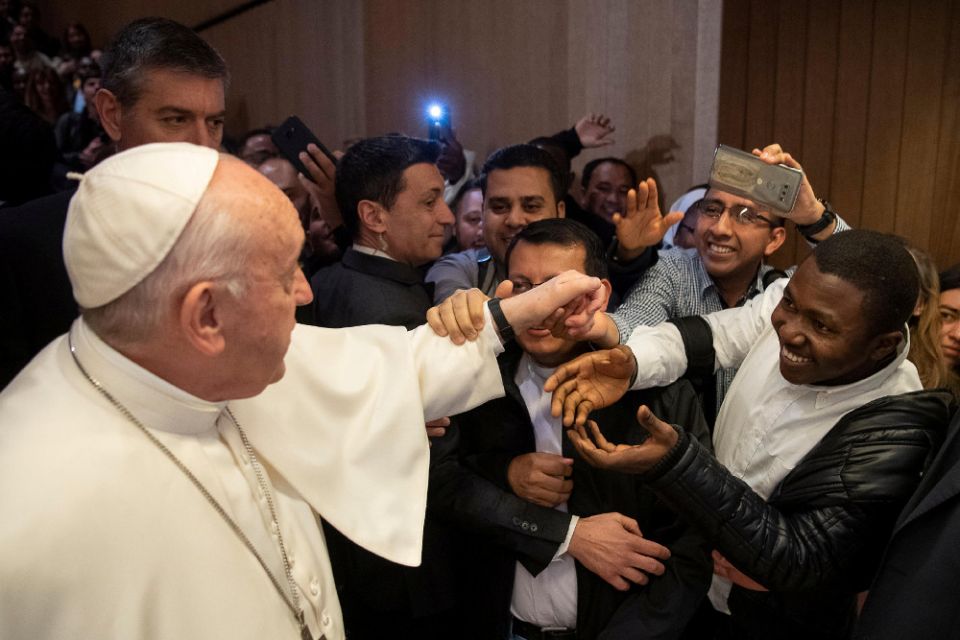 Pope Francis is greeted as he visits the Pontifical Lateran University in Rome March 26, 2019. (CNS/Vatican Media via Reuters)

Vatican City — Despite a busy day scheduled with meeting Rome's mayor and city council, Pope Francis made a surprise, early morning stop to offer a Lenten reflection for university students, encouraging them to build up their immunity against individualism with the Gospel.

"You understand well how the Gospel gives us the most radical and deepest antidote to defend ourselves and heal from the disease of individualism," he told the students and staff at Rome's Pontifical Lateran University March 26.

They should pursue their studies and their lives "with an open mind and on one's knees" in prayer — with an attitude of seeking and certainty based on the truths of reason and faith, he said.

After arriving unannounced for the 8:30 a.m. appointment, the pope led the school's traditional annual event as a "lectio divina," a form of prayerful meditation on the word of God.

Reflecting on the day's first reading from the Book of Daniel (3:25, 34-43), the pope underlined the importance of listening to Scripture from the vantage point of "today's reality" so as to unveil deeper and further meaning.

In the reading, Azariah praises God for his mercy and faithfulness, as he spared him and his two companions from all harm when they were thrown in a furnace for refusing to worship an idol.

Yet Azariah knows God's goodness includes divine justice for the sins of his people, who have been reduced "beyond any other nation, brought low everywhere in the world this day because of our sins."

Pope Francis said today's "cultural context" is a lot like that burning furnace, raging with one mindset that "engulfs and lulls everyone to sleep with its deadly embrace and burns every form of creativity and dissenting way of thinking."

Like Azariah and his companions, he told the students, "you walk unharmed thanks to being rooted in Jesus and his Gospel," able to keep a gaze fixed on high while remaining firmly a part of and active in today's world.

In fact, going to a pontifical university is not meant to isolate them from the real world, he said, but to get them used to it with a sense of "critical awareness and the ability to discern" so that they can have an impact on and contribute to society and culture.

Adhering to the Gospel and embracing church tradition, he said, are not meant to stop people from thinking or encourage them to listlessly repeat the same old phrases. Scripture and tradition "want first of all to give you a point of view that is free, authentic, faithful to what's real," and, "healthy" compared to what else is out there.

People are strongly tempted to live "a comfortable and cheap individualism" that cares nothing about others, God's creation and the future, the pope said.

He told the students that if they let themselves be led by the Lord and his angels, they will not "be burned" but walk away full of life and hope.

Christianity puts the focus on relationships, encountering the sacred mystery of the other and seeing universal communion with all of humanity as the vocation of everyone, he said.

Christians must stay rooted to their history, to the memory and dreams of the people of God because a firm sense of belonging will ensure they have "the antibodies to not commit the same mistakes" as their ancestors, against God, against others and against creation.

God's mercy overflows, he added, when he sees "our heart is truly contrite and remorseful."