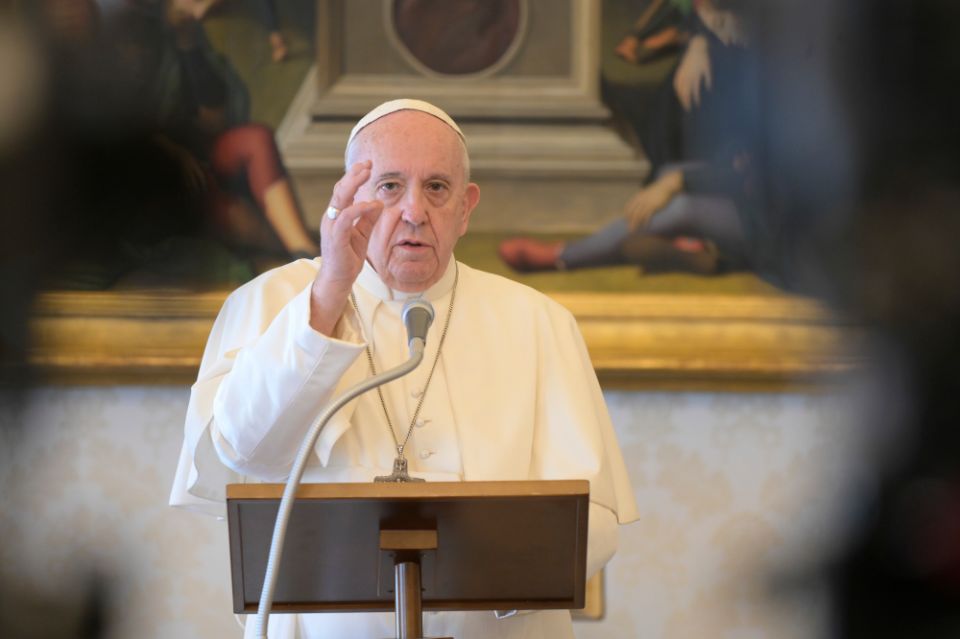 Pope Francis gives his blessing after leading the recitation of the "Regina Coeli" prayer from the library of the Apostolic Palace April 26, 2020. (CNS/Vatican Media)

Vatican City — When faced with uncertainties, adversities or trials, those who place their trust in Christ will not be left alone to fend for themselves, Pope Francis said.

Just as the disciples left Jerusalem after Christ's death and headed to Emmaus with only their sadness and fear, people may often find themselves discouraged when solely focused on their own hopelessness, the pope said April 27 before reciting the "Regina Coeli" prayer.

Nevertheless, Christians are called to hope in God and not focus on doubt or fear, he said in the address, which was livestreamed from the library of the Apostolic Palace.

When one chooses to follow God, "we will discover that there is nothing unexpected, there is no uphill climb, there is no night that cannot be confronted with Jesus," the pope said.

Reflecting on the day's Gospel reading from St. Luke, the pope said the disciples on the way to Emmaus made two trips. While their escape from Jerusalem was a sad and easy "downhill" journey, the pope said their return after encountering Christ was full of joy even though they were tired from the uphill travel.

By opening their hearts to Christ, listening him explain Scripture and inviting Jesus to their home, he added, the disciples' encounter with him is the same that all Christians must follow to experience joy.

"These are the three steps that we can also take in our homes: First, to open our hearts to Jesus, to entrust him with our burdens, hardships, disappointments in life," the pope said.

"Second, to listen to Jesus, to take the Gospel, read this passage from chapter 24 of Luke's Gospel; and third, pray to Jesus with the same words of those disciples, 'Lord, stay with us.' Lord, stay with me; Lord, stay with all of us because we need you so we can find the way," he said.

Earlier in the day, Francis celebrated his daily morning Mass in the chapel of residence, the Domus Sanctae Marthae.

At the start of each of his livestreamed Masses, the pope has offered prayers for groups that have suffered or who are on the front lines of the deadly coronavirus pandemic.

During the Mass April 26, the pope prayed for those who are sad and worried about the future.

During his April 25 Mass, the pope offered prayers for funeral service workers who at times are overwhelmed by the increased death tolls due to the pandemic.

"What they do is so painful, so sad and they feel the pain of this pandemic so closely," he said. "Let us pray for them."

The pope has also prayed for those who continue to work to lift spirits, even in the midst of suffering and fear. At the start of his morning Mass April 27, the pope offered prayers for artists who, "through the path of beauty, show us what path to follow."

"May the Lord grant all of us the grace of creativity in this time," he said.

In his homily, the pope also reflected on the day's Gospel reading from St. John in which Jesus reproaches the crowd after the multiplication of the loaves for following him "not because you saw signs but because you ate the loaves and were filled."

Francis said that at times, Christians can do the same and focus on temporal things and lose "the enthusiasm that Jesus' words had grown in their hearts."

"The Lord always makes us return to that first encounter, that first moment in which he looked at us, spoke to us and made us want to follow him," the pope said.

"This is a grace we should ask from the Lord because in life, we always have this temptation to distance ourselves when we see something else," he said.