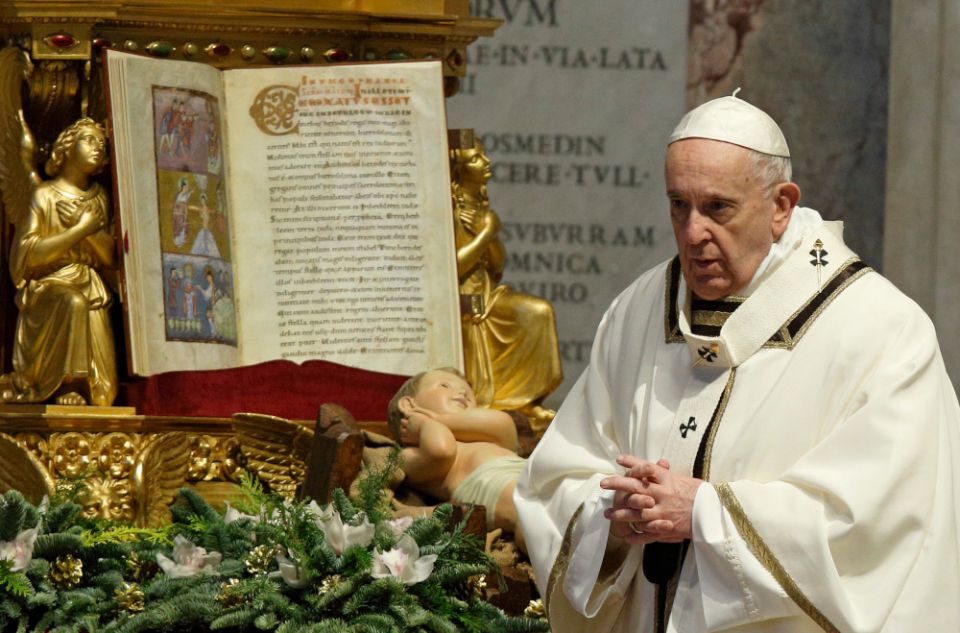 Pope Francis walks near a figurine of the baby Jesus as he celebrates Mass on the feast of the Epiphany in St. Peter's Basilica at the Vatican Jan. 6, 2021. (CNS/Paul Haring)

In times of doubt and suffering, Christians must not focus on their problems, but instead lift up their eyes to God, who leads them toward the hopeful promise of great things to come, Pope Francis said on the feast of the Epiphany.

"This does not mean denying reality, or deluding ourselves into thinking that all is well. Rather, it is a matter of viewing problems and anxieties in a new way, knowing that the Lord is aware of our troubles, attentive to our prayers and not indifferent to the tears we shed," the pope said.

The pope celebrated Mass with a little over 100 people, all wearing masks and seated socially distanced from each other, at the Altar of the Chair St. Peter's Basilica Jan. 6.

In accordance with an ancient tradition, after the proclamation of the Gospel on Epiphany, a singer from the Sistine Choir chanted the announcement of the date of Easter 2021 (April 4) and the dates of other feasts on the church calendar that are calculated according to the date of Easter.

After celebrating Mass, the pope prayed the Angelus in the library of the Apostolic Palace.

In his Angelus address, the pope said that Christ is "the star who appeared on the horizon, the awaited Messiah, the one through whom God would inaugurate his kingdom of love, of justice and of peace.

"He was born not only for some, but for all men and women, for all peoples," the pope said.

Christians, he added, "must also be the star for our brothers and sisters" and shine bright "by drawing near to the other, encountering the other, assuming the reality of the other. This is the only way that the light of God, who is love, can shine in those who welcome it and attract others."

"Woe to us if we think we possess it, that we only need to 'manage' it!" he exclaimed. "Like the Magi, we too are called to allow ourselves to be fascinated, attracted, guided, illuminated and converted by Christ."

Earlier, in his homily at Mass, the pope focused on three phrases proclaimed in the day's readings that offered "a few useful lessons from the Magi" on "what it means to be worshippers of the Lord." 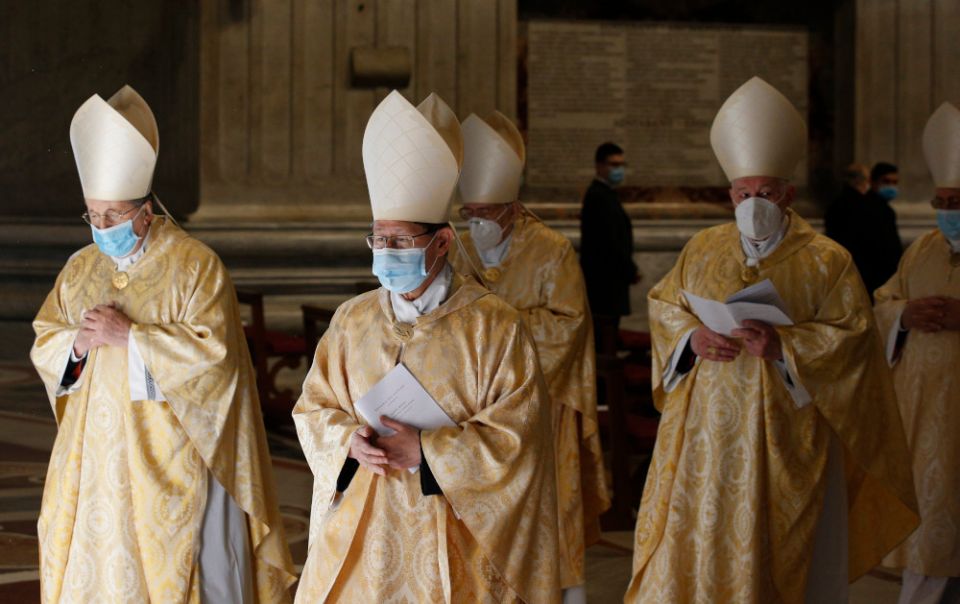 Cardinal Luis Antonio Tagle, prefect of the Congregation for the Evangelization of Peoples, and other cardinals walk in procession at the conclusion of Pope Francis' celebration of Mass on the feast of the Epiphany in St. Peter's Basilica at the Vatican Jan. 6, 2021. (CNS/Paul Haring)

"Like them, we want to bow down and worship the Lord," he said.

Reflecting on the first reading from the prophet Isaiah, the pope said the words of encouragement — "lift up your eyes" — spoken to the exiled people of Israel are a call to "lay aside their weariness and complaints, to escape the bottleneck of a narrow way of seeing things, to cast off the dictatorship of the self, the constant temptation to withdraw into ourselves and our own concerns."

Trusting in the Lord, despite problems, gives rise to gratitude, he said, and "our hearts become open to worship."

On the other hand, he said, focusing exclusively on problems and not looking to God for hope causes "fear and confusion to creep into our hearts, giving rise to anger, bewilderment, anxiety and depression."

"When we lift up our eyes to God, life's problems do not go away, but we feel certain that the Lord grants us the strength to deal with them," the pope said. "The first step toward an attitude of worship, then, is to 'lift up our eyes.'"

The second phrase — "to set out on a journey" — recalls the Magi's journey to Bethlehem to worship baby Jesus, he continued.

A journey, he said, always sparks a "transformation, a change" in which one learns new things and finds "inner strength amid the hardships and risks" he or she may encounter along the way.

"Like the Magi, we too must allow ourselves to learn from the journey of life, marked by the inevitable inconveniences of travel," he said. "We cannot let our weariness, our falls and our failings discourage us."

Even one's sins, when one recognizes and repents of them, "will help you to grow," the pope added.

Francis said the final phrase — "to see" — invites Christians to look "beyond the veil of things visible, which often prove deceptive," and instead follow the example of the Magi who observed the world with a "theological realism" that allowed them to perceive "the objective reality of things and leads to the realization that God shuns all ostentation."

It is "a way of 'seeing' that transcends the visible and makes it possible for us to worship the Lord who is often hidden in everyday situations, in the poor and those on the fringes," the pope said. It is "a way of seeing things that is not impressed by sound and fury, but seeks in every situation the things that truly matter."

Vatican | Like the Magi, look to the heavens for hope, pope says on Epiphany

From Christmas to Candlemas, let the light last

Anger erupts in Egypt after massacre of Christian pilgrims