Pope Francis: Celebrations, including Mass, are essential for family life 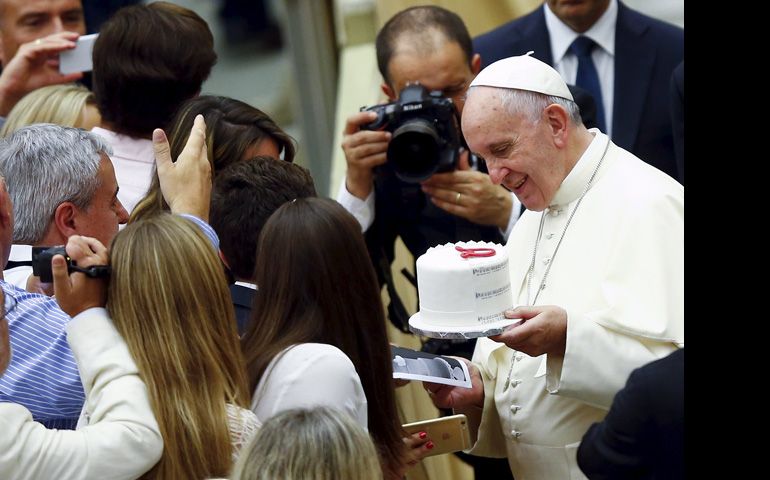 Pope Francis holds a cake he received from a newly married couple during his weekly audience in Paul VI hall at the Vatican Aug. 12. (CNS photo/Remo Casilli, Reuters)

Vatican City — Families need moments of rest and celebration, time for standing back and recognizing the gifts of God and how well they have developed, Pope Francis said.

Celebrations are times "to enjoy that which cannot be produced or consumed, that cannot be bought or sold," the pope said Aug. 12 at his weekly general audience.

Continuing his series of talks about the family in anticipation of the September celebration of the World Meeting of Families in Philadelphia and the world Synod of Bishops on the family in October, Pope Francis said he would be looking at "the rhythm of family life," focusing first on celebrations, then on work and on prayer.

"Celebrations are God's invention," he said, pointing to the description in the Book of Genesis of how, after creating the world, God took a day of rest and contemplated all he had created.

Life becomes truly human when people take the time to do the same, the pope said. "A celebration is above all a loving and grateful gaze at work done well," whether it's a wedding celebration of a relationship that has matured or birthdays and graduations when people "look at their children or grandchildren who are growing and think, 'How beautiful.'"

The best parties are always those that gather families together, Pope Francis said. "Family life, seen with the eyes of faith, shows itself to be worth more than the effort it requires. It is a masterpiece of simplicity and is beautiful precisely because it is not artificial, not fake."

While not ignoring one's obligations at work, he said, it also is important to allow celebrations of birthdays, marriages, new births, welcomes or farewells "to infiltrate" the workplace. "They are moments of familiarity that throw a cog in the production line. It does us good."

Days of rest, especially Sunday celebrations of Mass and time with the family, are important reminders that every human being is made in the image and likeness of God and is not a "slave to work."

Unfortunately, he said, even in the modern world there are women and children who have been reduced to slave-like conditions. "This is against God and against the dignity of the human person!"

In other cases, the pope said, people have made themselves slaves to work, thinking the point of life is to earn a lot of money. Even when they celebrate, he said, they allow consumerism "to swallow" the party by thinking the more money they spend, the better the celebration will be.

"But is that why we work?" he asked. "Greed for consuming, which leads to waste, is a horrible virus that, among other things, leaves us more tired than we were before. It poisons real work and consumes our lives."

"Celebrations are a precious gift God has given the human family. Let's not ruin them," he said.

The most important celebration for a family, the pope said, is Sunday Mass, which brings people "the grace of Jesus Christ, his presence, his love, his sacrifice, his making us a community, his being with us."

When people bring their lives to Jesus in the Eucharist, the real meaning of life is revealed, Pope Francis said. "Work, family, our daily joys and efforts, even suffering and death -- all are transfigured by the grace of Christ."

A family that doesn't eat together is 'hardly a family,' pope says

Pope Francis: Christian hope does not let sting of death poison your life