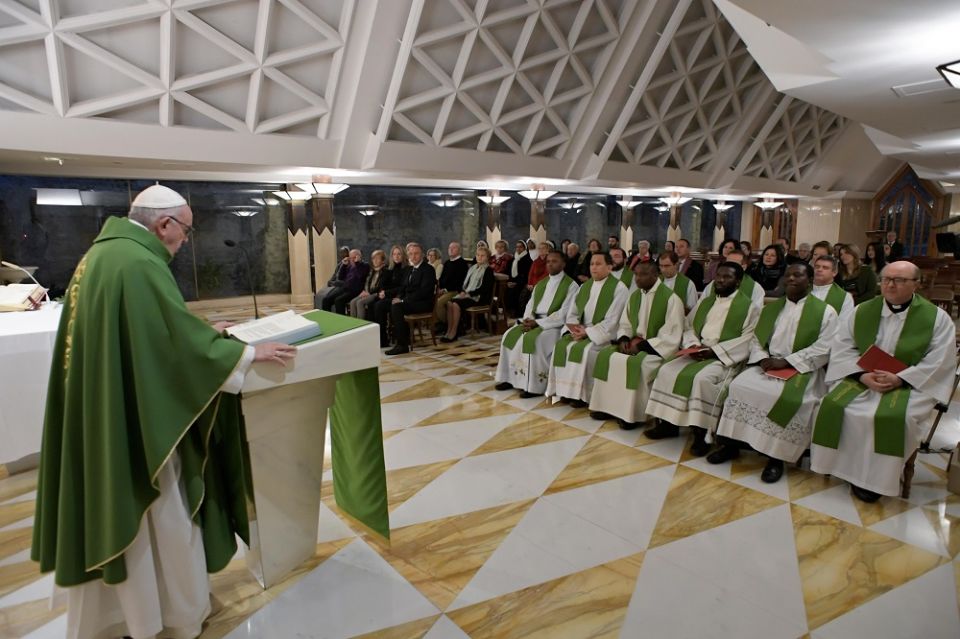 Pope Francis celebrates morning Mass in the chapel of his residence, the Domus Sanctae Marthae, at the Vatican Feb. 7, 2019. (CNS/Vatican Media)

Vatican City — Those who proclaim the Gospel must embrace humility and poverty to give an authentic witness to faith and not use others to climb the ladder of success, Pope Francis said.

Recalling St. Augustine's warning to pastors about feeding themselves rather than their flocks, the pope said that one who looks for milk is "seeking money and one who seeks wool likes to dress with the vanity of his office. He is a climber."

"If an apostle, an envoy, one of us — there are many of us envoys here — goes around with his nose in the air a bit, believing himself superior to others or looking for some form of human gain or, I don't know, looking for a position in the church, he will never heal anyone, he will never be able to open anyone's heart, because his word will have no authority," he said.

The pope centered his homily on the day's Gospel reading from St. Mark in which Jesus sends the apostles out two by two with "no food, no sack, no money in their belts" to heal the sick and drive out demons.

To be healed, he said, one must be willing to convert, to open one's heart to God's word.

The authority needed to heal wounded hearts, he added, comes from following the footsteps of Christ who walked the path of poverty, humility and meekness.

Christians, "not just a priest or a bishop" but "each one of us, has the power to heal" those who are ailing, the pope said.

"All of us need to be healed, all of us, because we all have spiritual diseases, all of us. But we also have the opportunity to heal others," the pope said. "This is a Christian community."

Helping the poor is not a papal fad, but a duty, pope says

Pope’s quotes: The Gospel of the marginalized