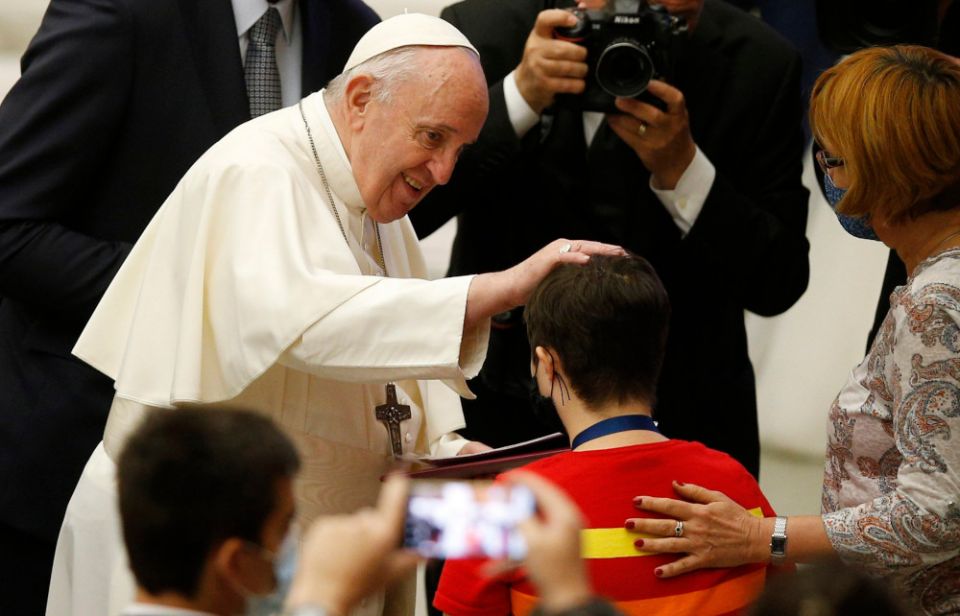 Pope Francis greets a pilgrim during his general audience in Paul VI hall at the Vatican Oct. 7, 2020. (CNS/Paul Haring)

Vatican City — Prayer isn't about closing oneself in a room with God "to put makeup on your soul — that's not prayer, that's fake praying; to pray is to face God and allow yourself to be sent by him to help a brother or sister," Pope Francis said.

"The proving ground for prayer is concrete love for one's neighbor," the pope said Oct. 7 at his weekly general audience.

Francis had begun a series of audience talks about prayer in May but interrupted them for nine weeks to explain the principles of Catholic social teaching and how their application could heal a world suffering from the COVID-19 pandemic, inequality, violence, social tension and despair.

At the general audience, which was moved into the Vatican audience hall because of rain, the pope announced he was returning to the catechesis on prayer by looking at Elijah, the prophet long venerated by monks, nuns and hermits as "a model of prayer and unshakable faith amid trials."

"In the soul of one who prays," he said, "the sense of one's own weakness is more precious than moments of exaltation when it seems that life is just a string of victories and successes."

Elijah was a contemplative, but at the same time he was concerned about what was happening around him, the pope said, pointing to the story in the First Book of Kings about Elijah confronting Ahab about taking advantage of the plot Jezebel hatched to kill Naboth and appropriate his land.

Francis said the world today needs "believers, zealous Christians," who can stand up to leaders with the courage of Elijah to say, "This must not be done. This is an assassination." 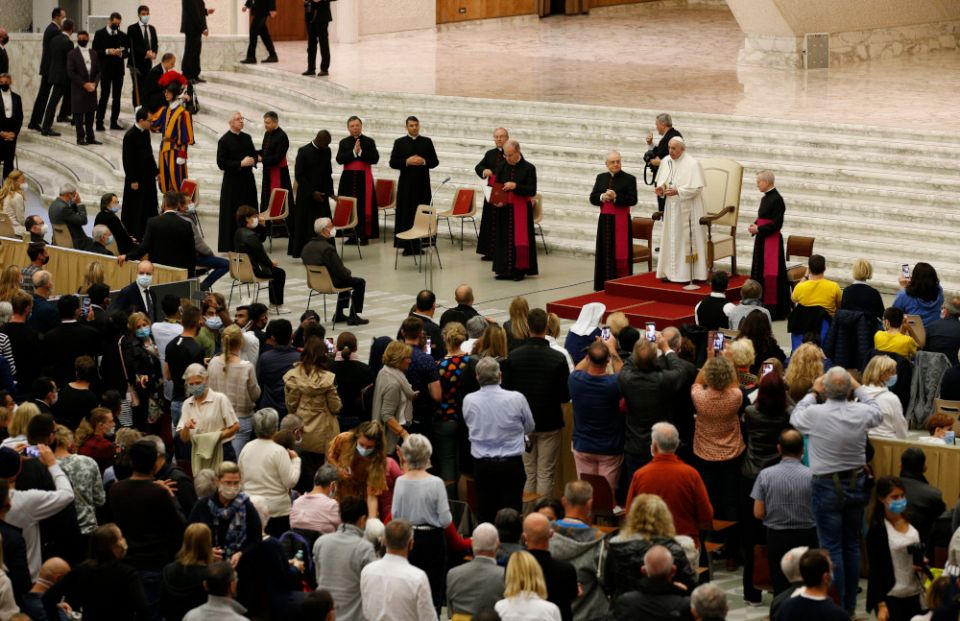 Elijah "shows how there must not be a dichotomy in the life of one who prays: you stand before the Lord and go out to encounter the brothers and sisters to whom he sends you," the pope said.

"Believers act in the world after first having been quiet and having prayed," he said. "Otherwise, their action is impulsive; it is lacking discernment; it is breathlessly running without a goal. Believers who behave like that commit many injustices because they did not go first to the Lord to pray, to discern what must be done."

"This happened to Elijah, but it seems like it was written for each of us," the pope said. "Some evenings we might feel alone and useless. That is when prayer comes and knocks on the door of our heart."

"Even if we made some mistake or we feel threatened and afraid, turning to God in prayer, serenity and peace will return almost miraculously," the pope said. "This is what Elijah's example teaches us."

With the audience taking place on the feast of Our Lady of the Rosary, Francis urged Catholics to pray the rosary.

"In her apparitions, Our Lady often exhorts us to recite the rosary, especially when confronted by threats darkening the world," the pope told Polish pilgrims. "Today, in this time of pandemic, it is necessary to take the rosary in our hands and pray for ourselves, our loved ones and all men and women."