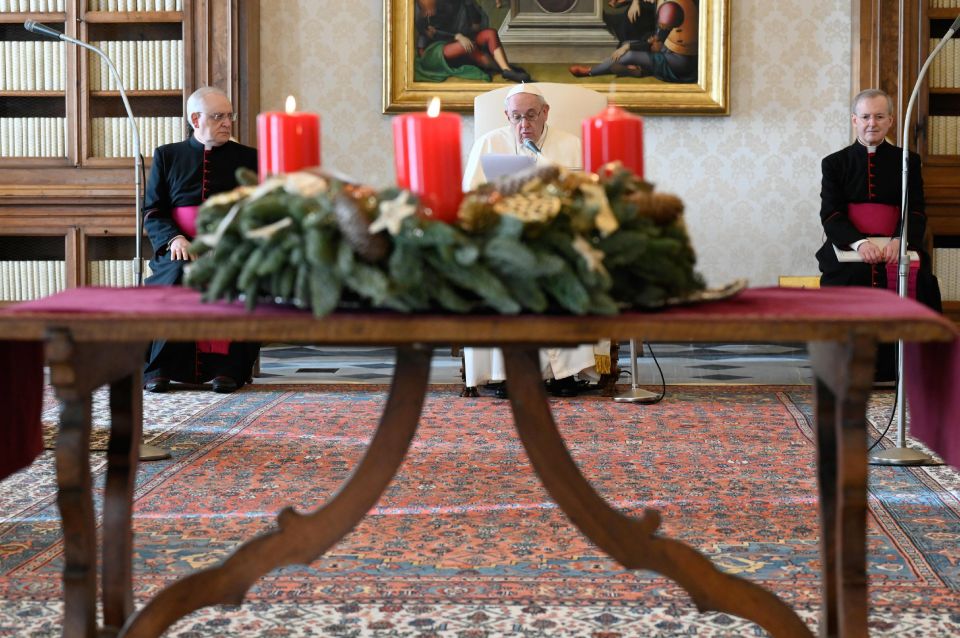 An Advent wreath is seen as Pope Francis leads his general audience in the library of the Apostolic Palace at the Vatican Dec. 9, 2020. The pope continued his series of talks on prayer, reflecting on prayers of petition. (CNS/Vatican Media)

Vatican City — Praying to God in times of joy and sorrow is a natural, human thing to do because it connects men and women to their father in heaven, Pope Francis said.

While oftentimes, people can look for their own solutions to their suffering and difficulties, ultimately "we should not be shocked if we feel the need to pray, we should not be ashamed," the pope said Dec. 9 during his weekly general audience.

"Do not be ashamed to pray, 'Lord, I need this. Lord, I am in difficulty. Help me!'" he said. Such prayers are "the cry, the cry of the heart to God who is the father."

Christians, he added, should pray "not only in bad times, but also in happy ones, to thank God for everything that is given to us, and not to take anything for granted or as if it were owed to us: everything is grace."

During the general audience, which was broadcasted from the library of the Apostolic Palace at the Vatican, the pope continued his series of talks on prayer and reflected on prayers of petition.

Prayers of petition, including the "Our Father," were taught by Christ "so that we might place ourselves in a relationship of filial trust with God and ask him all our questions," he said.

Although the prayer includes imploring God for "the highest gifts," such as "the sanctification of his name among people, the advent of his lordship, the realization of his will for good in relation to the world," it also includes requests for ordinary gifts.

In the "Our Father," the pope said, "we also pray for the simplest gifts, for the most of everyday gifts, such as 'daily bread' — which also means health, home, work, everyday things; and it also means for the Eucharist, necessary for life in Christ." 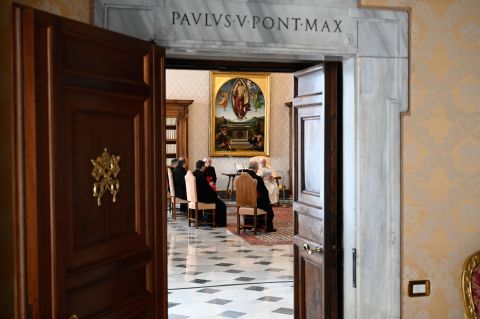 Pope Francis is pictured through a doorway as he leads his general audience in the library of the Apostolic Palace at the Vatican Dec. 9, 2020. The pope continued his series of talks on prayer, reflecting on prayers of petition. (CNS/Vatican Media)

Christians, the pope continued, "also pray for the forgiveness of sins, which is a daily matter; we are always in need of forgiveness, and therefore, peace in our relationships. And finally, that he may help us face temptation and free us from evil."

Asking or supplicating God "is very human," especially when someone can no longer hold on to the illusion that "we do not need anything, that we are enough for ourselves, and we live in total self-sufficiency," he explained.

Prayers of petition go hand in hand with accepting one's limitations, he said, and while one may even reach the point of not believing in God, "it is difficult not to believe in prayer."

Prayer "simply exists; it presents itself to us as a cry," he said. "And we all know this inner voice that may remain silent for a long time, but one day awakens and cries out."

Francis encouraged Christians to pray and not be ashamed to express the desires of their hearts. The season of Advent, he added, serves as a reminder that prayer is "always a question of patience, always, of withstanding the wait."

"Now we are in the time of Advent, a time that is typically of expectation, of the expectation of Christmas. We are in waiting. This is clear to see. But all our life is also in waiting. And prayer is always in expectation, because we know that the Lord will answer," the pope said.

Vatican | When in need, don't be ashamed to pray, pope says at audience