Francis: If church forgets mercy even for one moment, its work is 'useless' 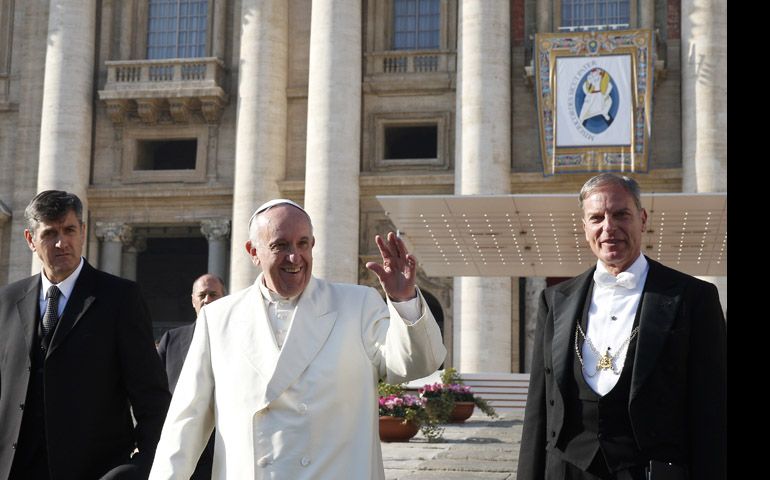 Pope Francis waves as he leaves his general audience in St. Peter's Square at the Vatican Dec. 9. (CNS/Paul Haring)
This article appears in the Holy Year of Mercy feature series. View the full series.

Rome — Any efforts at reform or renewal of the Catholic church that do not place God's mercy at the center of their work are "useless" because they make Catholics "slaves" to the church's institutions, Pope Francis said Wednesday.

Speaking in his weekly general audience in St. Peter's Square just one day after launching his global Jubilee year of mercy, the pontiff said that "only a merciful church shines."

"The necessary work of renewal of the church's institutions and structures is a means that must bring us to make alive and enlivened the experience of God's mercy that alone can guarantee a church that is a city upon a hill that cannot remain hidden," said the pope.

"If we were to forget, even just for a moment, that mercy is 'that which God likes most,' every one of our labors would be useless because we would become slaves of our institutions and our structures, however renewed they might be," he said. "We would always be slaves."

Francis was speaking Wednesday during a reflection on the meaning of the Jubilee year, which he formally started Tuesday with a Mass in St. Peter's Square and by opening the holy door in St. Peter's Basilica.

"The church has need of this extraordinary moment," the pope began his audience Wednesday. "In our era of deep changes, the church is called to offer its particular contribution, making visible the signs of the presence and closeness of God."

"The Jubilee is an opportune time for all of us so that, contemplating the divine mercy that overcomes every human limit and shines over the darkness of sin, we can become more convincing and efficacious witnesses," he continued.

"Turning the gaze to God, merciful Father, and to our brothers and sisters in need of mercy, means putting attention on the essential content of the Gospel: Jesus, mercy made flesh, who makes visible to our eyes the great mystery of the Trinitarian love of God," he said.

The pope called the Jubilee a "privileged moment" in which the church "may learn to choose only 'that which God likes most.'"

"And, what is it that 'God likes most?'" he asked. "Forgiving his children, having mercy on them, in order that they may, in their turn, forgive their brothers and sisters, shining as torches of God's mercy in the world."

Quoting off-the-cuff from the fourth-century bishop, theologian and saint Ambrose, the pontiff said the theologian once reflected on the Genesis account of creation and asked why God said God's creation of man and woman was "very good" while his creation of other animals was only "good."

"Because at the end God had someone to forgive." Francis quoted Ambrose.

"It is beautiful, eh?" he said. "God's joy is forgiving; God's being is mercy. In this year, we must open our hearts so that this love, this joy of God fills us all with this mercy."

The pontiff suggested a simple prayer people can practice to ask God for forgiveness: "Lord, I am a sinner, come with your mercy."

"This is a beautiful prayer," he said. "It is easy, eh? It is an easy prayer to say everyday."

Ending the audience, Francis said he wished that in the holy year "each one of us may make and experience of the mercy of God, to be witnesses of 'that which God likes most.'"

"Is it naive to believe that this may change the world?" he asked.

A Jubilee year is a special year called by the Catholic church to receive blessing and pardon from God and remission of sins. The Jubilee year of mercy continues through Nov. 20, the day celebrated next year as the feast of Christ the King.

While most Jubilees have been focused on calling pilgrims to Rome to receive such pardon, Francis has widely expanded his Jubilee, asking that dioceses throughout the world open a holy door at a cathedral or other church to expand the practice globally.

A holy door is a door normally designated in special churches -- like the four papal basilicas in Rome -- to be opened only during Jubilee years as a sign of the possibility of re-entering into God’s grace.

Francis will be opening the holy door at his cathedral church, St. John Lateran, on Sunday. He has directed that the holy doors in dioceses around the world be opened that same day.

Vatican | Francis: If church forgets mercy even for one moment, its work is 'useless'

Pope cancels agenda on medical advice because of knee pain