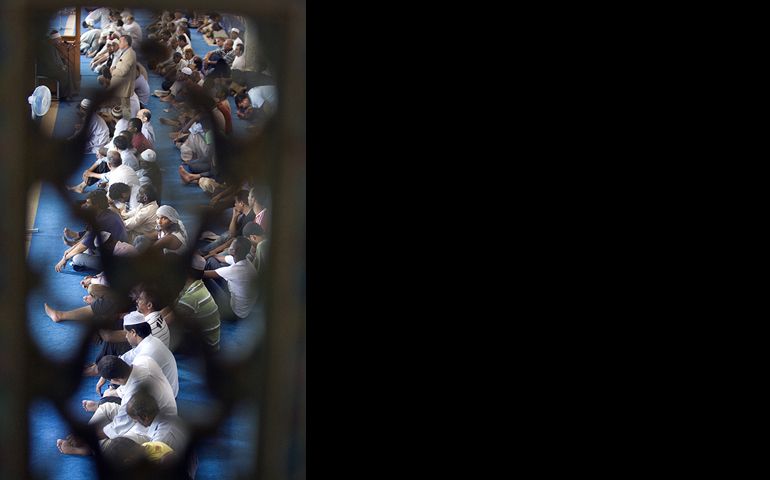 Muslims take part in the first Friday prayers of the holy month of Ramadan in Rome’s mosque on Sept. 5, 2008. (Reuters/Chris Helgren)

Vatican City — Pope Francis is studying an invitation to visit the Grand Mosque of Rome -- extended to him several days after his first visit to the city’s Great Synagogue.

If he accepts, Francis would be the first pope to visit the mosque. He received the invitation on Jan. 20 during a short audience he gave to Muslim community leaders at the Vatican.

After the meeting with the community leaders, including Abdellah Redouane of the Italian Islamic Cultural Center -- which is housed in the mosque -- and Imam Yahya Pallavicini of the Islamic Community of Italy, Vatican spokesman the Rev. Federico Lombardi said Francis would “study the invitation, and come to a decision.”

However, the spokesman dismissed Italian media reports that a visit could come as early as Jan. 27, the day after a scheduled papal meeting with visiting Iranian President Hassan Rouhani.

Francis has already been to mosques in Turkey and the Central African Republic, and in May 2014 he entered one of Islam’s holiest shrines, the Dome of the Rock in Jerusalem.

Located in the north of Rome, the Grand Mosque was opened in 1994 after years of planning. The complex was designed by architect Paolo Portoghesi.

While visiting the Great Synagogue of Rome -- built in 1904 -- on Jan. 17, the pope stressed the “irrevocability” of God’s covenant with the Jews and cited the Holocaust as a reminder of the ongoing need to combat violence.

Disappointment, outrage over papal document on the Amazon