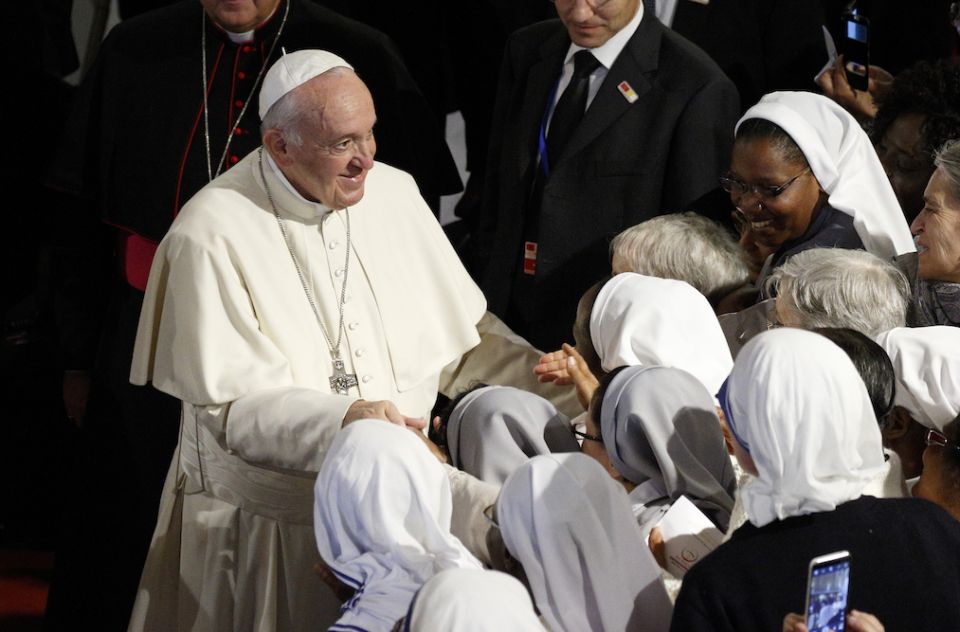 Pope Francis greets nuns as he meets with priests, religious men and women and the ecumenical Council of Churches at the cathedral in Rabat, Morocco, March 31. (CNS/Paul Haring)

RABAT, Morocco — Pope Francis sought to encourage Morocco's tiny Catholic community March 31, reassuring them that their effectiveness is not determined by their size but their ability to "generate change and awaken wonder and compassion."

In a meeting with Catholic and Christian clergy at Rabat's Cathedral of St. Peter toward the end of his two-day visit to this overwhelmingly Muslim North African nation, the pontiff called being a small fraction of the population "not a problem."

"What are Christians like, in these lands?" Francis asked the dozens of priests and religious taking part in the encounter, before answering: "They are like a little yeast … to mix in with a great quantity of flour until all of it is leavened."

"Jesus did not choose us and send us forth to become more numerous!" the pope exhorted. "He called us to a mission. He put us in the midst of society like a handful of yeast: the yeast of the Beatitudes and … fraternal love."

"Our mission as baptized persons, priests and consecrated men and women, is not really determined by the number or size of spaces that we occupy," said Francis.

"I believe we should worry whenever we Christians are troubled by the thought we are only significant if we are the flour, if we occupy all the spaces," the pope continued. "You know very well that our lives are meant to be 'yeast,' wherever and with whomever we find ourselves, even if this appears to bring no tangible or immediate benefits."

Francis was visiting Morocco in a trip that has primarily focused on highlighting efforts for Christian-Muslim dialogue and calling attention to the continuing crisis of refugees who risk dangerous voyages across the Mediterranean hoping to enter Europe after fleeing violence and famine.

The pontiff began his visit March 30 with a call for a global "change of attitude" toward migrants, warning that the crisis will "never be resolved by raising barriers [or] fomenting fear of others."

But during the final day of the trip, Francis' schedule was focused on encouraging Catholics in Morocco, who number about 23,000 among a population of some 34.9 million and are mainly foreign-born workers. After the morning meeting at the cathedral, the pontiff led what the Vatican said was likely the most attended Mass ever celebrated in the country. 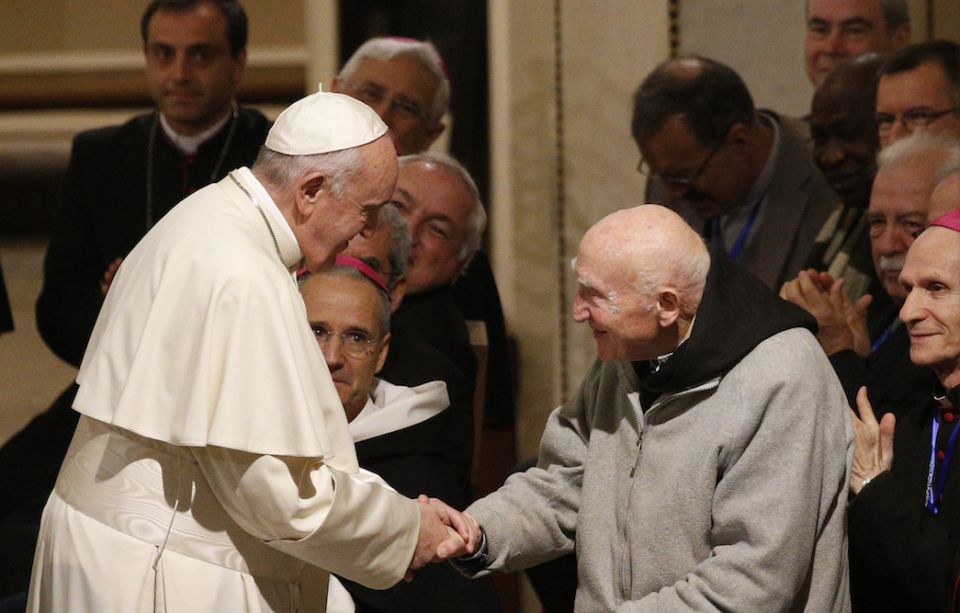 Pope Francis greets a clergy member as he meets with priests, religious men and women and the ecumenical Council of Churches at the cathedral in Rabat, Morocco, March 31. (CNS/Paul Haring) 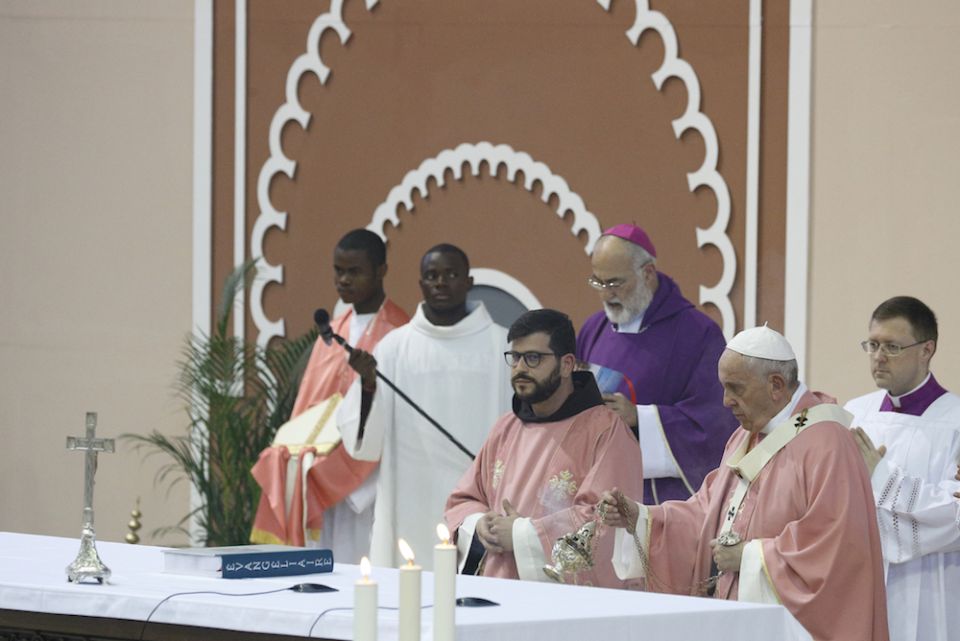 Both events were marked by the participation of members of other Christian denominations.

Attending the cathedral meeting were the three leaders of the Council of Christian Churches of Morocco, an ecumenical group that facilitates dialogue between the Catholic, Anglican, Evangelical, Greek Orthodox and Russian Orthodox communities in the country.

Francis thanked the council for its work at the opening of his address, calling it a "clear sign of the communion" experienced in the country.

Also at the meeting were Catholic bishops from across the territory of the Regional Episcopal Conference of North Africa, which includes Morocco, Algeria, Tunisia and Libya.

In his remarks, Francis reflected on how priests and religious pray and care not only for Catholics but all entrusted to them. The pope recalled meeting with one priest who had discussed with him the power of the words "give us this day our daily bread" in the Our Father prayer.

Francis said the priest's prayer "expanded to that people which was in some way entrusted to him, not to govern but to love, and this led him to pray this prayer with special feeling."

"Consecrated persons and priests bring to the altar and to their prayer the lives of all those around them; they keep alive, as if through a small window, the life-giving power of the Holy Spirit," said the pontiff.

"How beautiful it is to know that, in different parts of this land, through your voices, all creation can constantly pray: 'Our Father,' " the pope added.

Despite its small size, the Catholic Church in Morocco runs 34 schools across the country that educate some 12,000 children. The church also maintains ten orphanages and one hospital. 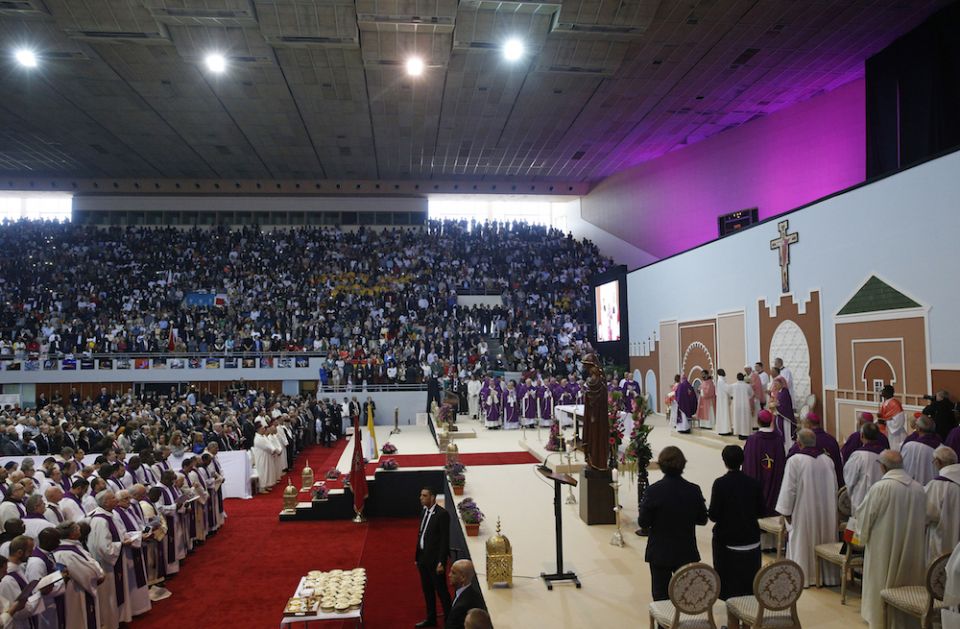 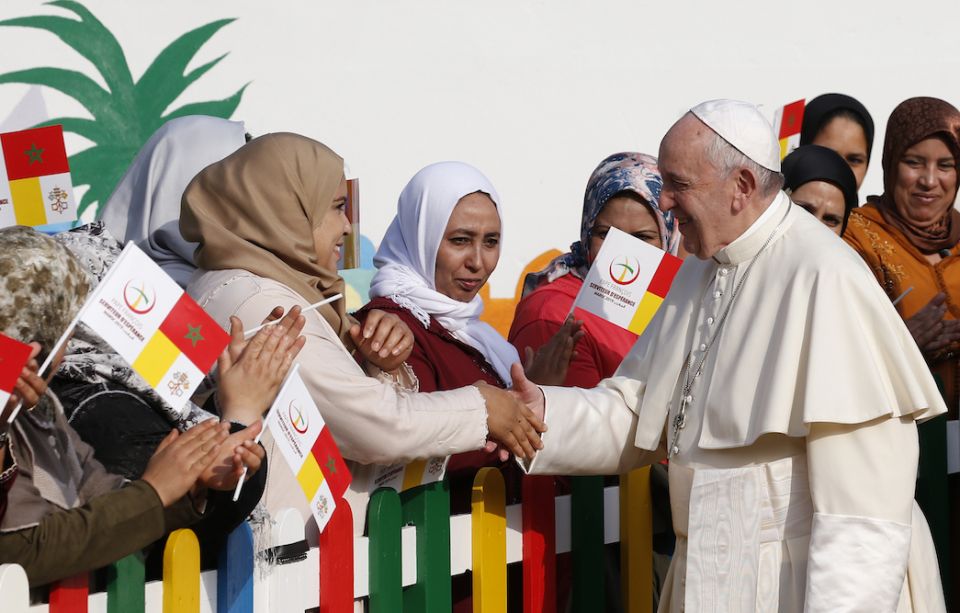 Among the religious attending the meeting was 95-year-old Trappist Br. Jean-Pierre Schumacher, the last survivor of the 1996 killings of the monks of Tibhirine in Algeria. Before speaking, Francis greeted Schumacher, who now lives in Morocco, and kissed his hand.

At the later Mass at Rabat's Prince Moulay Abdellah sports complex, the pope reflected on the parable of the prodigal son and called on Moroccan Catholics to confront any tensions they feel amongst themselves.

Looking over the quiet but enthusiastic crowd at the small soccer venue, Francis told them to transcend "shortsighted and divisive ways of thinking."

Earlier in the day Francis visited a social service center in nearby Temara run by Vincentian sisters that offers free meals to about 150 children each day and trains women in tailoring. As he left, the pontiff paused for a photo surrounded dozens of people and children assisted by the center, smiling as they waved small Vatican and Moroccan flags.

Read this next: Remembering the monks of Tibhirine

The last monk of Tibhirine: 'God drove that history'