Francis tells Poles: God not in a history book, but peoples' real lives 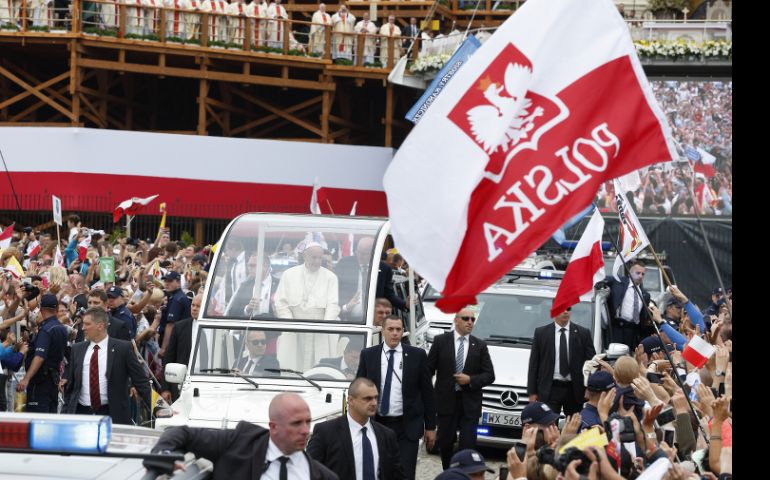 Celebrating the Christianization of this Eastern European nation in an outdoor Mass filled with throngs of backpack-carrying pilgrims on Thursday, Pope Francis said God does not live in a history book but is close to us and wants us to get involved in the concrete situations of peoples' lives.

In a homily to hundreds of thousands outside the Jasna Gora monastery, which houses Poland's famous image of the Black Madonna, the pontiff said God is not "powerful and aloof" but "loves to come down to our everyday affairs, to walk with us."

"The Lord does not keep his distance, but is near and real," said Francis. "He is in our midst and he takes care of us, without making decisions in our place and without troubling himself with issues of power."

"The eternal is communicated by spending time with people and in concrete situations," the pope explained.

Francis was speaking Thursday during a celebration marking the 1,050th of Poland's Christianization in this small town, about 90 miles northwest of the historic former capital of Krakow and long a global pilgrimage site due to the Marian image.

The pontiff is visiting the country through Sunday for the celebration of the 14th World Youth Day, a global event started by his Polish predecessor John Paul II. The visit has been a unique mix of things religious, political, and historical.

Upon arrival in the country Wednesday, Francis spoke politically, asking President Andrzej Duda and the Polish political elite to be more welcoming to migrants fleeing persecution and war.

On Friday the pope will make a nod to the historical, heading to the World War II concentration camps of Auschwitz and Birkenau in memory of the horrific violence of the last century.

Thursday was marked by deep religious symbolism. Upon arriving from Krakow, Francis entered the monastery to pray before the image of the Black Madonna, a 14th century icon of Mary holding Jesus that is marked by its dark complexion and three deep scratches across Mary's right cheek.

The pontiff contemplated the image, which the Vatican described as composed to allow you to immerse yourself in Mary's gaze, for more than a minute before offering a brief prayer and heading outside for the Mass.

In his homily, the pope reflected on the passage from John's Gospel where Jesus turns water into wine for a marriage celebration in Cana.

"In a small village, a simple miracle takes place and brings joy to the wedding of a young and completely anonymous family," the pontiff described the event.

"At the same time, the water that became wine at the wedding banquet is a great sign, for it reveals to us the spousal face of God, a God who sits at table with us, who dreams and holds communion with us," the pope continued.

Noting that in the story it is Mary who asks Jesus to perform the miracle, the pontiff said she showed "great concreteness" with her request.

"She is a mother who takes people's problems to heart and acts," said the pope. "She recognizes moments of difficulty and handles them discreetly, efficiently and decisively."

"Let us ask for the grace to imitate her sensitivity and her creativity in serving those in need, and to know how beautiful it is to spend our lives in the service of others, without favorites or distinctions," he continued.

Earlier in the Mass Francis missed a step near the altar and fell to the ground. The 79-year-old-pontiff, who suffers from sciatica, got up quickly and continued on with the celebration.

Crowds gathered outside the monastery for the Mass many hours before the pope's arrival, with some camping overnight in tents to hold spots for the occasion. Many wore travel backpacks and sat in makeshift camp chairs, watching the celebration on large jumbotron screens.

The throngs of people packed the hill leading towards the shrine for at least a half-mile. Some were waving flags of various types -- for Poland, Italy, Vatican City, and with large images of Francis -- while others knelt in prayer as they waited the start of the event.

People had to walk for miles to reach the site due to security precautions, which were preventing cars from entering the area.

With millions of pilgrims expected by the conclusion of World Youth Day on Sunday, security has been a key concern for the organizers, who say that some 20,000 police officers and military personnel are overseeing safety.

Those forces lined streets and bridges along the route of the papal convoy in both Czestochowa and Krakow Thursday, wearing bright yellow vests over their uniforms and standing as close as about a yard apart in some places.

There were also parked police vans near several of the events full of soldiers wearing tactical gear, including helmets and thick protective vests.

Vatican spokesman Jesuit Fr. Federico Lombardi told reporters Wednesday evening that there "are not particular concerns for the security of the pope or the hundreds of thousands of young people present."

"The climate is honestly of great normality and tranquility," said the spokesman.

Francis travelled back to Krakow Thursday afternoon, where he took part in a festive celebration with an estimated 600,000 young people attending World Youth Day.

Youths holding flags from nations around the world greeted the pope with screams and cheers as he arrived at the city's Blonia Park, where representatives of six continents presented him with images of six saints from their diverse parts of the world.

In remarks to the crowd, the pontiff exhorted the young people to practice having a merciful heart that takes care of others.

"A merciful heart is able to be a place of refuge for those who are without a home or have lost their home; it is able to build a home and a family for those forced to emigrate; it knows the meaning of tenderness and compassion," said Francis.

"A merciful heart can share its bread with the hungry and welcome refugees and migrants," he continued. "To say the word 'mercy' along with you is to speak of opportunity, future, commitment, trust, openness, hospitality, compassion and dreams."

"Are you all able to dream?" Francis then asked the crowd, adding to his prepared text.

Youths from 187 countries have been reported at the event, including more than 30,000 from the U.S. Many have been accompanied by their bishops, and organizers say about 70 cardinals and 800 bishops from around the world are participating.

The pontiff heads Friday to Auschwitz and Birkenau, which are about 30 miles west of Krakow. He plans to pray in the cell occupied by martyr St. Maximilian Kolbe, a Franciscan friar murdered at Auschwitz.

The pope has not planned to speak publicly during the visit to the camps, choosing instead to remain silent in the face of such tragic history.

Pope Francis: God's word is 'a love letter to us' to be read every day

Bishop resigns after disclosing he is father of two children

With looming retirements, Francis can pick up the pace on naming US bishops