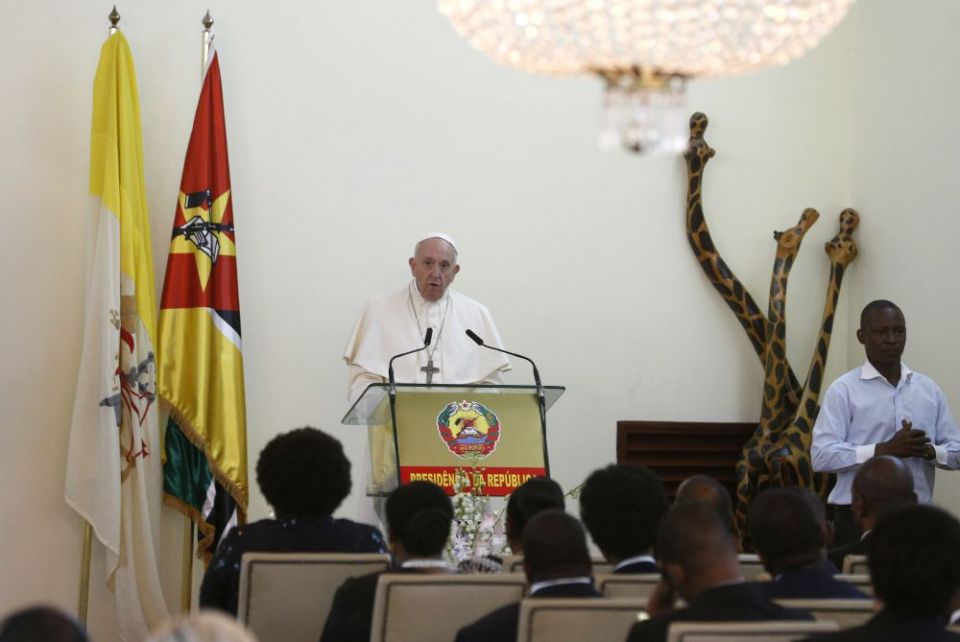 Pope Francis speaks at a meeting with authorities, leaders of civil society and the diplomatic corps at the Palacio da Ponta Vermelha in Maputo, Mozambique, Sept. 5. (CNS/Paul Haring)

Maputo, Mozambique — Pope Francis urged the leaders of Mozambique's government and a former guerilla movement Sept. 5 to maintain a new peace deal that ended years of violent conflict, exhorting them to have the "genuine courage" to lay aside their arms in service of the common good.

Opening a six-day visit to three Southern African nations with an address at the Mozambican presidential palace, the pontiff expressed his gratitude, and that of the global community, that the two sides had forged peace. But he called for "strenuous, constant and unremitting effort" to keep it.

"Make your future not one of conflict, but of the acknowledgement that you are all brothers and sisters, sons and daughters of a single land," the pope exhorted.

The effort to maintain the peace deal, he said, "demands that we continue, with determination but without fanaticism, with courage but without exaltation, with tenacity … to promote peace and reconciliation, not the violence that brings only destruction."

Francis is visiting Mozambique, which is to the northeast of South Africa on the southern tip of the African continent, a month after the Aug.1 signing of the peace agreement, which formally ended decades of conflict between the ruling party, known as Frelimo, and its armed opposition, known as Renamo.

A 15-year civil war between the two groups killed an estimated 1 million people. Although the war officially ended in 1992, sometimes brutal violence had flared at different points in the 27 years since.

The pope's visit also comes just five weeks before Mozambique's scheduled Oct. 15 national elections. President Filipe Nyusi is facing a challenge from Renamo leader Ossufo Momade, and the country is due to consider a new constitutional amendment considered essential for the peace deal, as it decentralizes power to allow for the direct election of provincial governors.

Nyusi echoed some of Francis' sentiments in his speech welcoming the pontiff to the country, stressing the need for politicians to work together for the common good. The president drew sustained applause from the crowd in the Ponta Vermelha palace when he mentioned both Momade and another political opponent, asking them to stand for recognition.

Mozambican Catholics, who represent about 25 percent of the country's population of about 27 million, expressed hope that Francis' words would help the nation continue on the path of peace. 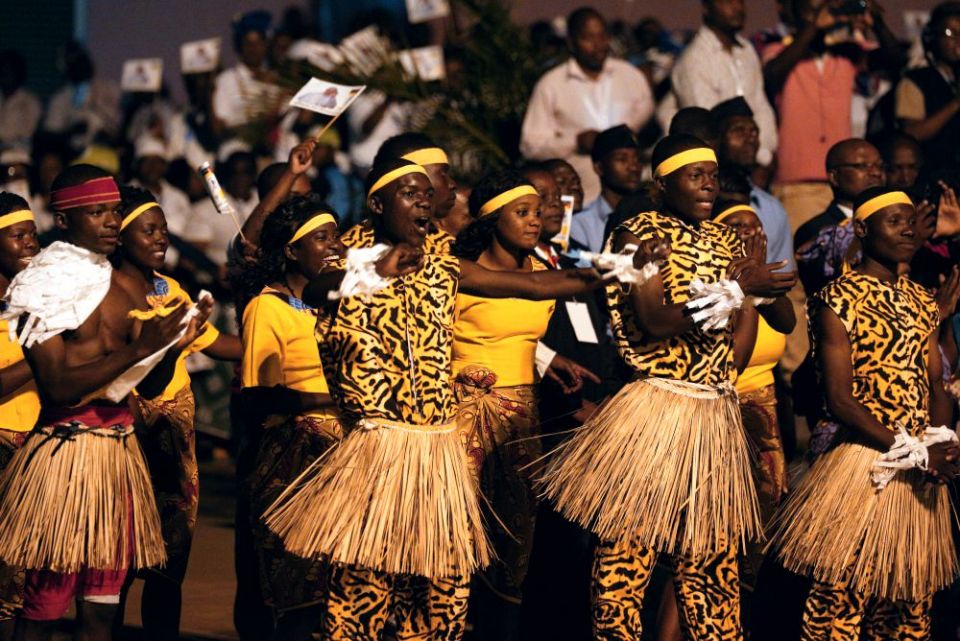 Maputo Auxiliary Bishop António Ferreira Sandramo, who has been helping organize the visit to the country, said he understood the pope to be telling people "to move together on the road of constructing the ways of goodness for everyone in this country."

Diplomats present for the address likewise praised the pontiff.

"It's definitely a good day for peace and reconciliation," said Myrta Kaulard, the United Nations resident coordinator in Mozambique. "For good elections you need peace. For development you need peace."

The U.S. ambassador to Mozambique, Dennis Walter Hearne, called the pope's visit "one more step" in consolidating reconciliation and added that anticipation of his coming had helped to create an environment of "optimism for the elections in October."

Aside from political concerns, Francis' visit to Mozambique comes also as the country is recovering from the damage inflicted by cyclones Idai and Kenneth, which made back-to-back landfalls off the Indian Ocean in March and April.

The natural disasters kicked off a devastating cholera outbreak, caused an estimated $2 billion in damage, and ravaged vast swaths of farmland just before harvest time. The U.N.'s Office for the Coordination of Humanitarian Affairs estimated in July that some 1.6 million people in the country remain severely food insecure as a result. 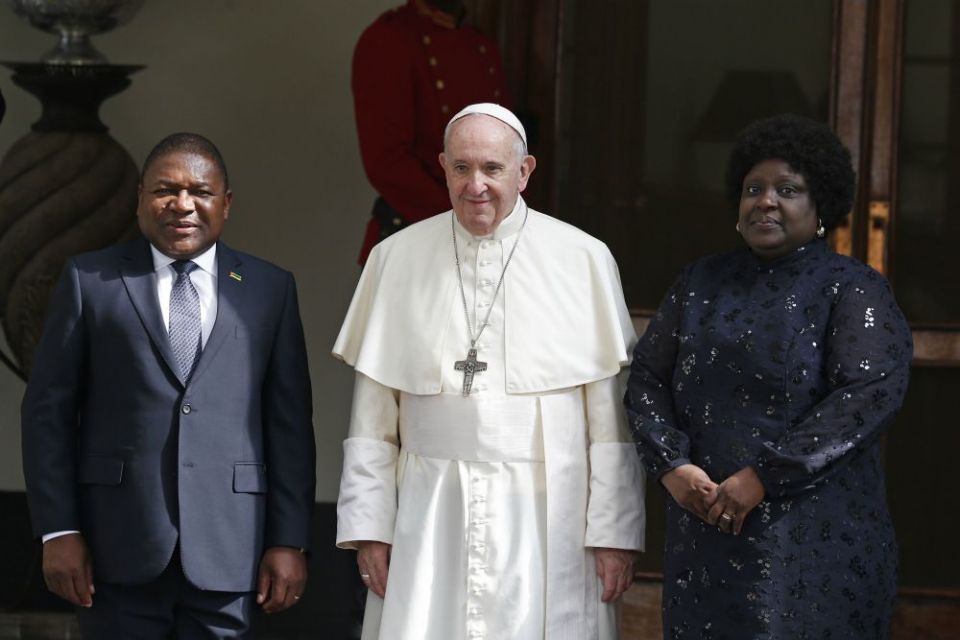 Pope Francis and Mozambican President Filipe Nyusi and his wife, Isaura, are pictured as they arrive for a meeting with authorities, leaders of civil society and the diplomatic corps at the Palacio da Ponta Vermelha in Maputo, Mozambique, Sept. 5. (CNS photo/Paul Haring)

Francis apologized in his speech for not being able to visit some of the most affected areas, which the Vatican said was due to concerns that arranging a papal visit would delay reconstruction efforts.

Later in the morning Sept. 5, the pontiff hosted an inter-religious meeting with young people in a local soccer stadium, where he encouraged them to overcome differences and "live and celebrate today the challenge of peace."

The event at the stadium had a festive atmosphere, with the about 4,000 participants singing and dancing as they awaited the pope's arrival. After Francis entered the stadium, several groups put on skits for him, including one that depicted the horror of war, using cardboard guns and red fabric blood. 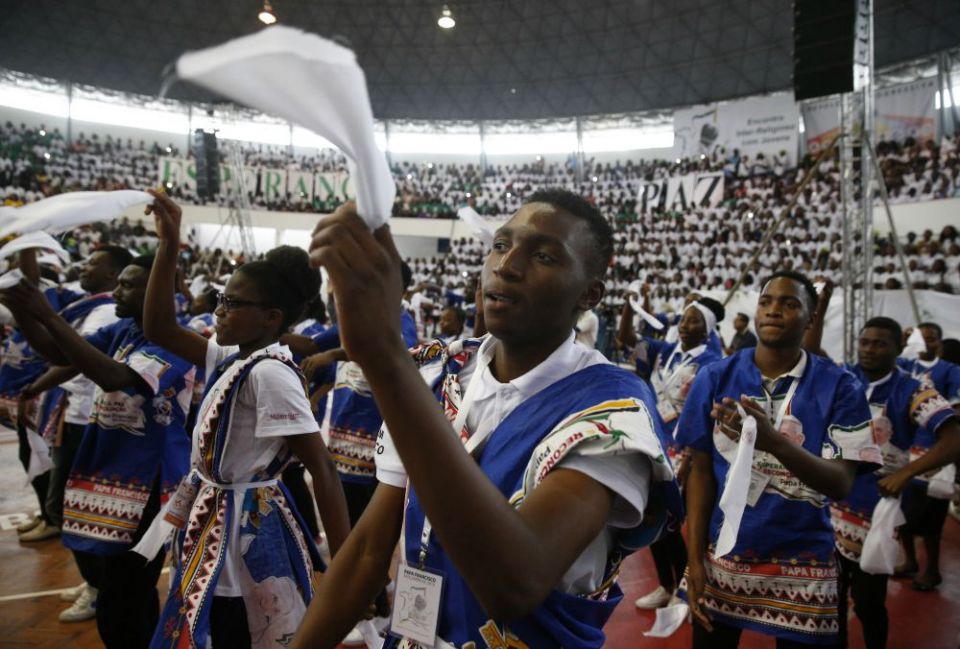 The pope is to continue his visit to Mozambique Sept. 6 with a public Mass and a visit to a local HIV/AIDS clinic, run by the Community of Sant'Egidio. He heads later in the day to Madagascar, 750 miles east in the Indian Ocean, where he will stay through Sept. 10.

On Sept. 9, the pontiff will take a two-hour flight further east for a day-trip to Mauritius, a smaller island about the size of the state of Rhode Island, before coming back to Madagascar for the evening ahead of a flight home to Rome in the morning of Sept. 10.

Kaulard, the U.N. official, said Francis' effort to simply come to Mozambique would provide the country with a needed boost.

"When was the last time Mozambique was in the spotlight?" she asked. More than anything, the visit shows that it is a place that mattered, she said, adding: "This after all is a quite remote country."

A version of this story appeared in the Sept 20-Oct 3, 2019 print issue under the headline: 'Poverty is not inevitable!' .