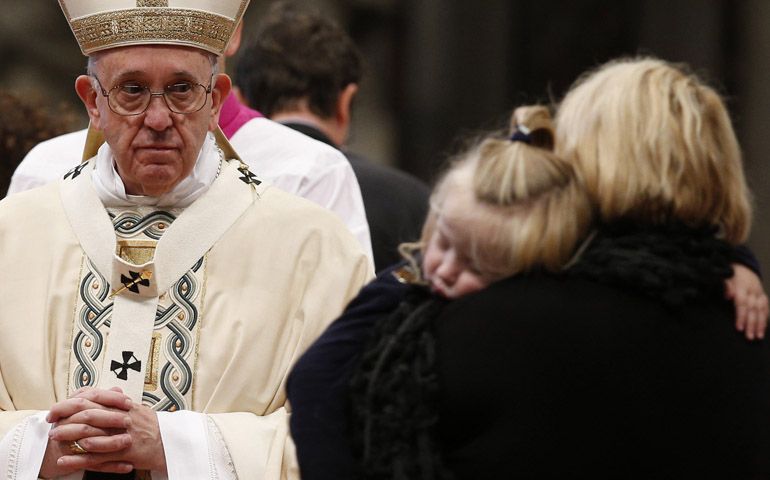 Pope Francis accepts offertory gifts from a mother holding her sleeping child during a Mass marking the feast of the Epiphany at the Vatican Jan. 6. (CNS/Paul Haring)

Vatican City — Pope Francis has again strongly called for a global Catholic church that is missionary in all its aspects, saying the church has an obligation to those who are waiting to learn about Christ and may be in need of a message of mercy and peace.

The pontiff has also warned church leaders from thinking the faith can attract people on its own power, emphasizing that “the Church cannot deceive itself into thinking that it shines with its own light.”

In a homily at a Mass Wednesday for the celebration of the feast of the Epiphany, Francis reflected on the story of the star that is said to have attracted three wise kings to journey from afar to adore the child Jesus in Bethlehem.

The pope referenced a metaphor from fourth-century St. Ambrose, who presented a church that reflects the light of God like the moon reflects the sun.

“Proclaiming the Gospel of Christ is not simply one option among many we can make, nor is it a profession,” he continued.

“This is its service,” said the pope. “There is no other way. Mission is its vocation. Shining the light of Christ is its service.”

Francis was speaking Wednesday during a solemn Mass in St. Peter’s Basilica for the Epiphany, celebrated by Catholics each year on Jan. 6 to commemorate the visit of the three Magi to the newly-born Jesus. The pontiff said the story of the three gentile kings visiting the Jewish boy evinces God’s desire to overcome every division in humanity.

“The Magi … are living witness of the fact that the seeds of truth are present everywhere because they are gifts of the Creator who calls all to recognize him as good and faithful Father,” said Francis.

“The Magi represent the people of every part of the earth that are received in the house of God,” said the pope. “In front of Jesus, division of race, language and culture no longer exist. In that Child, all humanity finds its unity.”

Speaking of how the apparition of the star in the night sky had urged the kings to journey to find Jesus, Francis said the church “has the obligation to recognize and make emerge in a more clear way the desire of God that everyone has in themselves.”

“Like the Magi, many people, even in our days, live with a ‘restless heart’ that continues to question without finding answers that are certain,” said the pope. “They are looking for the star that leads the way toward Bethlehem.”

“Let’s follow the light that God offers us!” the pontiff exhorted. “The light that streams from the face of Christ, full of mercy and fidelity.”

“Once we arrive in front of him, let us worship him with all our heart, and present him with our gifts: our freedom, our intelligence, our love,” he asked. “Let us recognize that true wisdom lies hidden in the face of this Child.”

“It is here, in the simplicity of Bethlehem, where you find the synthesis of the life of the church,” said Francis. “For here is the wellspring of that light which draws to itself every individual and guides the journey of peoples along the path of peace.”

In that reflection, the pope said Christians today can find “great consolation” in the Magi’s seeing of the Christmas star, saying it shows we are guided by God and not abandoned to our own destiny.

But the pontiff said the kings’ experience also “encourages us to not be satisfied with mediocrity, to not ‘scrape by a living,’ but to search for the sense of things, to scrutinize with passion the great mystery of life.”

“And it teaches us to not be scandalized by smallness and poverty, but to recognize majesty in humility, and to know to fall on our knees in front of it,” said the pope.

Wednesday’s Mass was the second-to-last in a number of papal Masses and events to mark the Christmas season, which will end Sunday with the celebration of the feast of Jesus’ baptism.  Francis will mark that occasion with a Mass at the Sistine Chapel where he will also baptize several children.

The musicians who were part of Wednesday's Mass included members of the archdiocesan chorus of the U.S. archdiocese of Detroit, who were invited to join the Sistine Chapel Choir for the feast day.