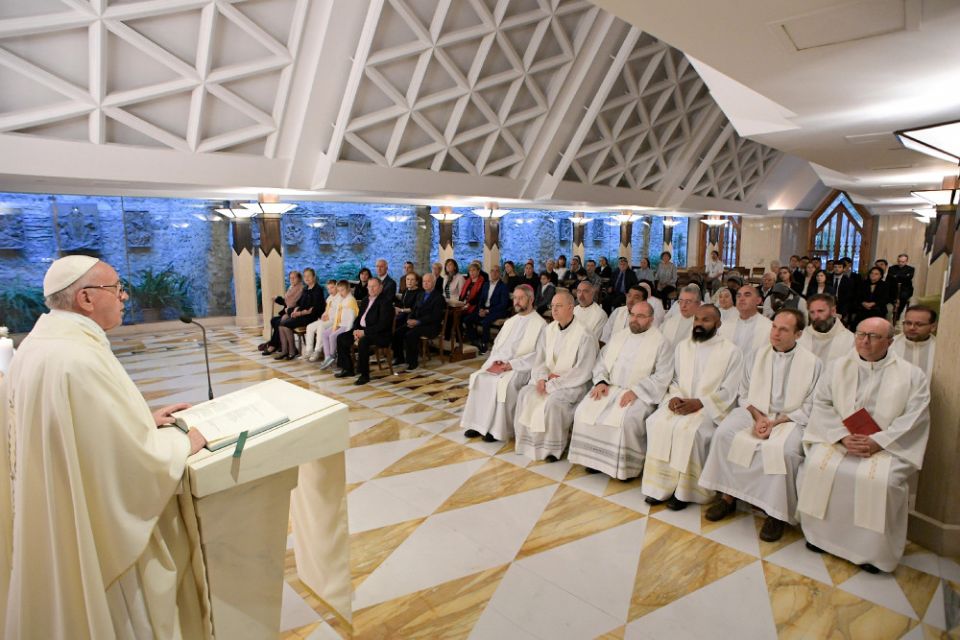 Pope Francis gives the homily as he celebrates Mass Sept. 18 in the chapel of the Domus Sanctae Marthae at the Vatican. (CNS/L'Osservatore Romano)

Vatican City — Those who govern or are in positions of authority are called to be humble and serve the good of the people God entrusts to them rather than the interests of their party or themselves, Pope Francis said.

Without prayer, a leader risks serving his own selfish desires or political party, closing himself or herself in a "circle from which there is no escape," the pope said Sept. 18 during morning Mass at Domus Sanctae Marthae.

"Who has more power than a ruler? The people, who have given him the power, and God, from whom power comes through the people," the pope said. "When he has this awareness of being subordinate, he prays."

In his homily, the pope reflected on the day's reading from St. Paul's First Letter to Timothy in which he asks that "supplications, prayers, petitions and thanksgivings be offered for everyone, for kings and for all in authority."

The pope also spoke about the day's Gospel reading from St. Luke, which recounted Jesus' healing of a slave at the behest of his master, a Roman centurion.

"This man felt the need for prayer" not because it was a last resort but because he knew that "there was someone above him, there is another who is in charge," the pope said.

Praying for politicians and those who lead, the pope continued, is important "because it is the prayer for the common good of the people who are entrusted to him."

Leaders also must pray and ask the Lord for wisdom so that they find their true strength in God and in the people and not "in small groups or in myself," he said.

And leaders who claim they cannot pray because they are agnostic or atheist, he said, at least must examine their consciences and seek counsel from those their people consider wise.

Christians "cannot leave rulers alone, we must accompany them with prayer," the pope said. And when a leader does "awful things," he added, they need even more prayers.

"Pray, do penance for those who govern," the pope said. "The prayer of intercession — it is beautiful what Paul says — is for all leaders, for all those in power. Why? So 'that we may lead a quiet and tranquil life.' When a leader is free and can govern in peace, all people benefit from this."