Inadequate formation a factor in lack of vocations, bishops say at synod

by Barbara J. Fraser, Catholic News Service
Vatican
This article appears in the Synod for the Amazon feature series. View the full series. 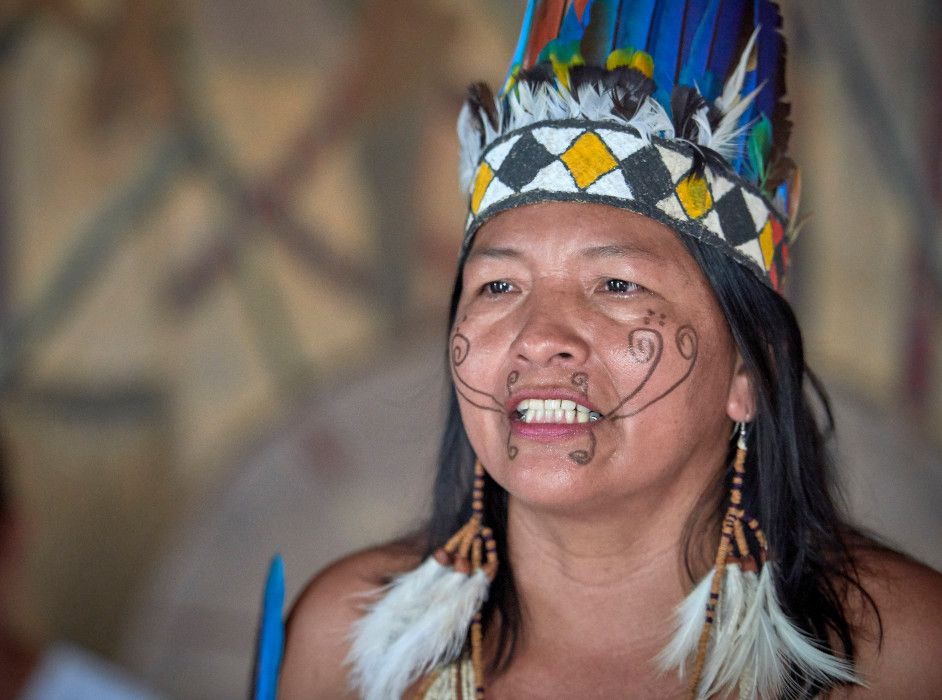 Marta Nicanor Alfredo, pictured April 7, 2019, is a Tikuna indigenous woman in Manaus, Brazil. Existing formation programs are not preparing priests and other pastoral workers to be leaders in a church with an Amazonian and indigenous face, according to bishops participating in the Synod of Bishops for the Amazon. (CNS/Paul Jeffrey)

Vatican City — Existing formation programs are not preparing priests and other pastoral workers to be leaders in a church with an Amazonian and indigenous face, according to bishops participating in the synod for the Amazon.

"It's not the same to evangelize in the city as in the Amazon," Bishop Rafael Cob Garcia of Puyo, Ecuador, told journalists at an Oct. 12 press briefing. "The needs are different."

Formation must be adapted to meet those needs, he said.

Synod participants repeatedly have mentioned the lack of sufficient priests to celebrate the Eucharist and other sacraments in the thousands of communities scattered throughout huge church jurisdictions in Amazonia.

Some bishops have pointed to the church's mandatory celibacy requirement as an obstacle to indigenous vocations. In many indigenous cultures, a young man is not considered an adult and a full member of the community until he has a family.

Another obstacle is academic, because quality education is lacking in rural villages, Cob said. When young men from villages go to a seminary in the city, they often find themselves behind their urban classmates academically and drop out.

When a young man goes from an indigenous village to an urban seminary, he also is uprooted from his culture, Franciscan Father Joao Messias Sousa, who ministers among the Munduruku people in Brazil's Tapajos River basin, told Catholic News Service.

The Munduruku culture is based on sharing, instead of individual property, he said, and they are not "slaves of time." When they arrive at the seminary, where schedules are strict and people have their own rooms, study materials and other possessions, "it's a shock," he said.

For those who do continue, current formation falls short, Cob said, adding that seminary formation sometimes loses sight of the fact that "our vocation is rooted in being servants."

In brief remarks to synod participants Oct. 14, Pope Francis said he was disappointed that some seminarians from Latin America go to other countries to study and stay abroad instead of returning to work as missionaries in places like the Amazon, two participants told CNS.

Some bishops are seeking ways to give formation a more Amazonian face, but they said there is a shortage of qualified people to do formation. Brazilian Immaculate Heart of Mary Sister Roselei Bertoldo said it is also important for seminaries and theology schools to include women on their faculties.

A lack of qualified teachers in Amazonian towns forces the Amazonian bishops in Ecuador to send priesthood candidates to Quito, the capital, Cob said. Once there, the students provide support for each other, and the bishops can pool staff to accompany them. Nevertheless, he said he hopes they will be able to establish a seminary in the Amazon in the future.

The Prelature of Sao Felix, in Brazil's Mato Grosso state, established its own school of theology to provide formation appropriate for ministry in Amazonian communities, Bishop Adriano Ciocca Vasino said at the press briefing. The school is open to both men and women.

Candidates for ordained ministry complete their theology studies at the prelature's school and then do four years of ministry in communities. Only if the community agrees that they are prepared for the priesthood does the bishop ordain them, he said.

Young men in their late teens are interested in the priesthood, but Ciocca said he and his colleagues are still determining the best way to accompany them.

Similar difficulties exist elsewhere in the world, according to Cardinal Sean P. O'Malley of Boston, who told synod participants about an official visit he once made to seminaries in Guatemala.

Although the Central American nation has a large indigenous population — in fact, it is one of the countries with the largest percentage of indigenous people in the world — the seminary in Guatemala City had just received its first indigenous students.

Far from their home communities, however, the indigenous students at the capital's major seminaries "were like fish out of water," the cardinal wrote in an Oct. 11 blog post about his presentation at the synod.

After visiting schools in the capital, he traveled to the Diocese of Verapaz, in central Guatemala, which had a new seminary exclusively for indigenous students.

"I had to speak to them through interpreters because they did not speak Spanish," O'Malley wrote.

The school lacked funding — the cardinal noted that the seminarians' families had to take food to them — and closed several years later, even though it had a large number of seminarians.

The Verapaz seminary offered "an opportunity to train indigenous priests in their own language and in their own cultural context," he wrote. "I felt badly when the seminary closed because I knew those seminarians would never be able to attend a different sort of seminary."

That is a cautionary tale for those looking for ways to increase vocations in the Amazon region, O'Malley said.

"If we want to have priests there, we are going to have to make sacrifices to have people who can promote vocations and accompany and train seminarians in their own milieu and their own languages," he said.

Vatican | Inadequate formation a factor in lack of vocations, bishops say at synod