The inner workings of a hierarchy with a sex offender mentality 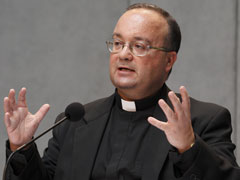 The Vatican announcement that the attempted ordination of women is a “grave crime” to be dealt with according to the same procedures as the sexual abuse of minors exposes the way those running our church actually think. In attempting to explain revised norms to church canons, they reveal the legalistic inner workings of their minds, and affirm unsettling psychological patterns of thought.
{C}
Msgr. Charles Scicluna of the Vatican’s Congregation for the Doctrine of the Faith, for example, speaking about the new codes July 15, identified the sexual abuse of minors as an “egregious violation of moral law.” His statement placed the emphasis on “violation of law.” When all the words are parsed, and the nuances carefully articulated, it is law that has prominence.

What about the children? Should we not think of sexual abuse, in the first place, as an “egregious violation of children?”

This distinction is significant because it paints in bold letters the central concern of a hierarchical church whose first interest is ensuring its pronouncements are obeyed. A violated law and a violated child evoke, or ought to evoke, quite different emotional responses. Tears are generally not shed over a broken law. Perhaps this is why we have seen precious few tears among church leaders. They have been schooled to place obedience to the law above all else, with a tragic disconnect of empathy the predictable result.

We have conducted psychological evaluations of dozens of clergy sex abusers over the past 25 years, becoming familiar with their style of cognitive processing. Similar to sex offenders in general, they typically deny responsibility, minimize the seriousness of their offenses, blame their victims, react with outrage when accused and redirect attention away from their behavior. They are self-centered and often exhibit a sense of grandiosity -- a belief that they are above accountability. If this sounds familiar, it is because we have repeatedly -- and sadly -- been seeing it in the responses of church officials from the cathedrals of the United States to the basilicas of Rome.

A mentality is a way of thinking, a deeply ingrained pattern of perceiving, reasoning and decision-making. A sex-offender mentality is one that prompts defensive, self-serving, deceptive and blaming responses when faced with credible accusations of sexual crime. Unaware of their abnormal processing, sex offenders display a blindness that is central to the problem.

Even more disconcerting, however, is that characteristics observed in the mentality of individual offenders can also be present in systems and institutions. The similarity in cognitive processing between actual offenders and the system that seeks to shield itself from their offenses is often chilling:


These and similar statements illustrate a mentality whereby the characteristic way of thinking of sex offenders has found its way into the collective psychic structure of an institution. The same “default” setting in the brain that triggers distorted mental processing prompts members of an entire group to think and respond in much the same way that sex offenders do. This “group think” inadvertently offers protection to actual sex offenders, and may have attracted them to the institution in the first place.

Let us be clear: We are not suggesting that church leaders are sex offenders. But we must name a tragic reality: Many of them think or respond the way sex offenders do when confronted with clergy sex abuse and its cover-up: They deny, defend and blame. They minimize and cover up. They become outraged when their abysmal handling of abuse cases is exposed. Most egregious of all, they display appalling deficits in empathy for victims: They turn to categorizing crimes when all people want is a heartfelt pastoral response from their leaders.

Celibacy is mandated for male church leaders. Women are excluded from sacramental leadership, thus creating an ecclesial environment that offers a perfect refuge for those whose sexual interests do not include women. Among them are the sexually disinterested, who simply don’t pick up sexual cues in the environment. For these asexual men celibacy is easy -- and so is failing to notice if some of their brothers become sexual with minors. Since asexual individuals have a minimized capacity for intimate feelings, their affectivity is stunted, limiting their ability to experience the whole range of the most normal human feelings, including falling in love and feeling horrified over the abuse of a child. Women are a genuine threat to this world. They can expose it. Keeping them far away from the inner workings of the system is essential to its survival.

Rome has now connected the sexual abuse of minors and a ban on the ordination of women in one of its own documents. Perhaps those who crafted the document are on to something: The refusal to allow women into the inner sanctum of ecclesial power may well be related to clergy sexual abuse, and to the Vatican’s impotence in addressing this crime in a truly pastoral way. Is the attempted ordination of women a crime, or is the real crime the refusal to allow it?

Pope goes back to school, meets students, community in Harlem