by Christopher White
Vatican
This article appears in the Pope Francis in Kazakhstan feature series. View the full series. 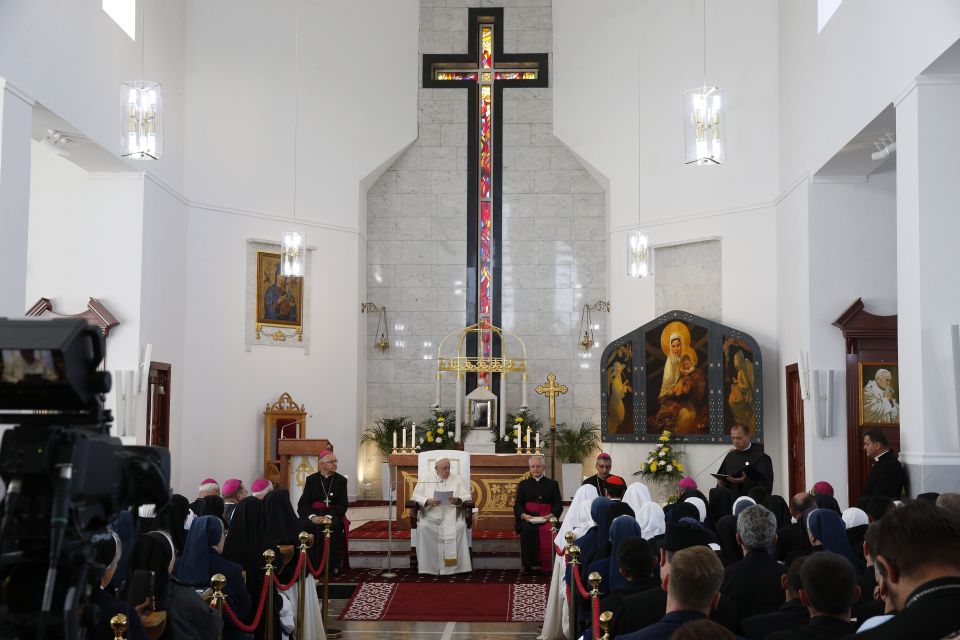 Pope Francis listens to a translation of his talk during a meeting with bishops, priests, deacons, consecrated persons, seminarians and pastoral workers at the cathedral of Our Lady of Perpetual Help in Nur-Sultan, Kazakhstan, Sept. 15, 2022. (CNS photo/Paul Haring) 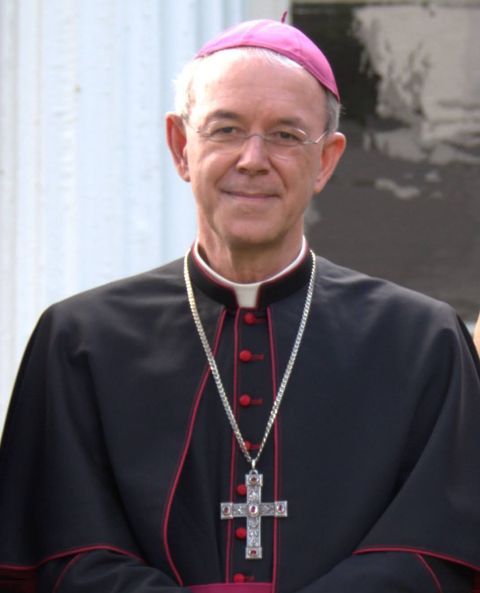 NUR-SULTAN, Kazakhstan — An outspoken bishop of Kazakhstan's Catholic community, long known for his criticisms of Pope Francis, said on Sept. 15 that the pope's participation here in a major summit of interfaith leaders could give the "dangerous" impression that the Catholic Church is part of a "supermarket of religions" rather than the "one true religion."

Ahead of an address by Francis to Central Asian clergy, auxiliary Bishop Athanasius Schneider of Astana, Kazakhstan, told reporters he feared that Francis' involvement in the country's 7th Congress of Leaders of World and Traditional Religions could "undermine the uniqueness and absoluteness of Jesus Christ as Savior and of our mission to preach to all nations, to all religions, Jesus Christ."

On Sept. 14, Francis — who has made interfaith outreach a signature theme of his papacy — addressed nearly 100 religious leaders gathered in the Kazakh capital for the triennial event, saying the diverse religious representatives are "children of the same heaven" with a shared mandate to promote peace and coexistence.

Schneider, however, said he believed that such global events could be "used by the political elites for their purposes" and that he would advise the Vatican that interfaith engagement should take place on a more local level in the future.

He also said the pope's backing of the event could signal that Catholicism is one faith among others, with equal legitimacy.

"This is not correct because there is only one true religion, which is the Catholic Church, founded by God himself, but commanded to all man, to all religions, to believe and accept his son Jesus Christ, the only Savior," he said.

In recent years, Schneider has regularly allied himself with former Vatican nuncio to the United States, Archbishop Carlo Maria Viganò, who has called on the pope to resign. He is known as a liturgical traditionalist and opposed Francis' cautious opening of Communion for divorced and remarried Catholics.

Yet in the city's Cathedral of Our Lady of Perpetual Help, ahead of the pope's arrival, Schneider defended himself, saying bishops "are not employees of the pope."

The 61-year-old bishop, who was born in the Soviet Union, raised in Germany and made an auxiliary bishop to Kazakhstan in 2011, said that if the pope says something that is "not correct" or "ambiguous" that it was his duty to "fraternally" express his concerns.

"This is, to me, true brotherly love," he added.

Despite his pointed remarks, however, Schneider said Francis' Sept. 13-15 visit to the country had been an occasion to "experience the Catholicity of the church with the presence of the pope" and had been well-received by Catholics and non-Catholics alike.

When Francis arrived at the cathedral for his own encounter with the region's clergy and lay leaders, he went on to offer an address that implicitly rejected some of Schneider's concerns and reiterated his belief that Catholics should continue to actively collaborate with other traditions.

"We also need others, all others: our Christian sisters and brothers of other confessions, those who hold other religious beliefs than our own, all men and women of goodwill," the pope said. "May we realize, in a spirit of humility, that only together, in dialogue and mutual acceptance, can we truly achieve something good for the benefit of all."

The pope also insisted that Catholicism is neither a backwards looking faith nor closed off to the world around it, telling those gathering in the cathedral to reject "rigidity, dogmatism and moralizing" and to be open to new ways of witnessing to the faith in the modern world.

The task of the church, said Francis, is "not to be a group bogged down in the same old way of doing things, or withdrawn into its shell since it feels small, but a community open…to the newness of the Spirit and to the signs of the times."

While Catholics make up only one-percent of the Muslim-majority nation, the pope noted that Christianity has been practiced in Central Asia since the first centuries, with a long history of active missionary work.

Spreading the faith today, the pope told them, "is not about looking back with nostalgia, getting stuck in the past and letting ourselves be paralyzed and immobile."

"When we do that, we are tempted to take a step backwards," he warned.

The pope also offered a direct challenge on the training of new priests, saying that Catholic seminaries "should be 'schools of sincerity,' not places of rigidity and formality, but training grounds in truth, openness and sharing."

"Faith is not a lovely exhibition of artifacts from a distant past, but an ever-present event, an encounter with Christ that takes place in the here and now of our lives," he said. "So we cannot pass it on by simply repeating the same old things, but by communicating the newness of the Gospel. In this way, faith remains alive and has a future."

The pope's remarks were met with sustained applause and chants of "viva il Papa" ("Long live the pope!").

Following a final address to the interfaith leaders gathered here in the Kazakh capital, Francis will fly back to Rome, landing in the evening of Sept. 15. An onboard press conference is scheduled during the flight.