by Christopher White
Vatican
World
This article appears in the Pope Francis in Kazakhstan feature series. View the full series. 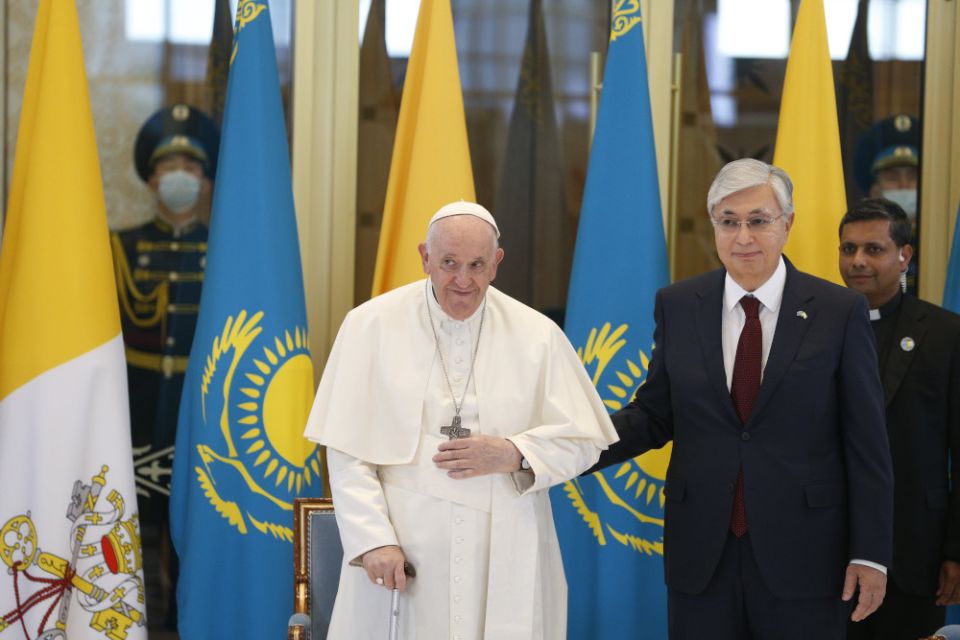 Pope Francis is welcomed by Kazakh President Kassym-Jomart Tokayev as he arrives at the international airport in Nur-Sultan, Kazakhstan, Sept. 13, 2022. (CNS photo/Paul Haring)

Nur-Sultan, Kazakhstan — Pope Francis on Sept. 13 kicked off a three-day trip to a country that shares a 4,700-mile-long border with Russia by condemning the "senseless and tragic war" in Ukraine and pleading with world leaders to listen to those who "cry out for peace."

On a trip that was originally meant to facilitate a face-to-face meeting with a key backer of the war, Russian Orthodox Patriarch Kirill — who just last month canceled plans to also travel to the Central Asian country — the pope touted the virtue of personal encounters with those of different backgrounds, religions and political traditions.

"I have come here as a pilgrim of peace, seeking dialogue and unity," Francis said during a meeting with Kazakhstan's civil authorities, in his first event in the former Soviet nation. "I have come to echo the plea of all those who cry out for peace, which is the essential path to development for our globalized world." 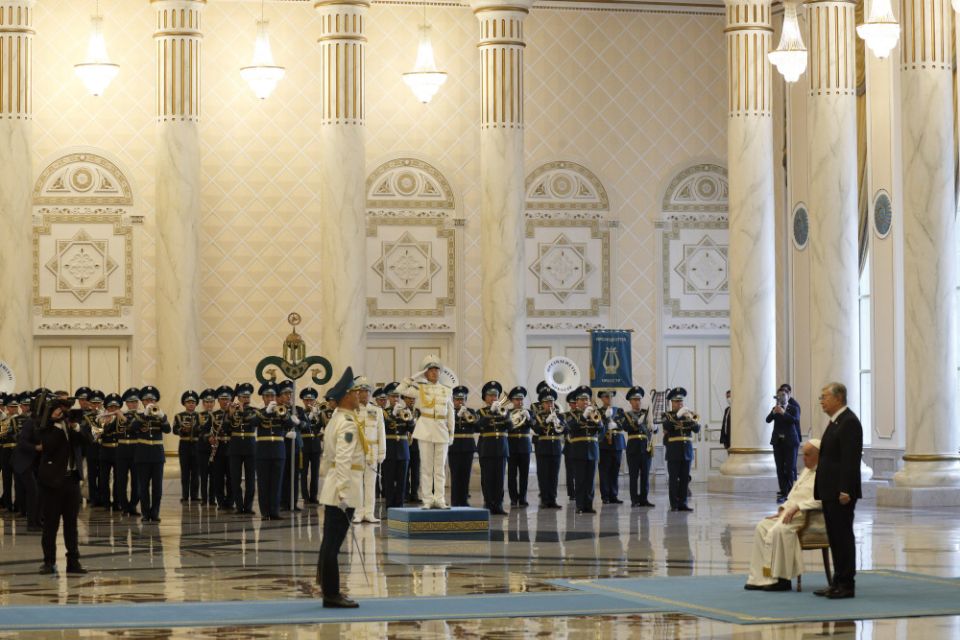 Francis is visiting Kazakhstan, which shares its entire northern border with the Russian Federation, as a participant in the 7th Congress of Leaders of World and Traditional Religions, where over 100 faith leaders will gather for a two-day Sept. 14-15 summit in the Kazakh capital.

The conference, which began in the aftermath of the Sept. 11, 2001 terrorist attacks on the United States and takes place every three years, is meant to aid in resisting extremism and fostering harmony among religious traditions.

While this year's theme is focused on the role of religion in recovering from the global COVID-19 pandemic, Russia's war against Ukraine has largely overshadowed the gathering.

"Now is the time to stop intensifying rivalries and reinforcing opposing blocs," Francis said.  "We need leaders who, on the international level, can enable peoples to grow in mutual understanding and dialogue."

In his first public remarks since arriving in a country that serves a geographic bridge between Europe and Asia – Kazakhstan is located about 1,500 miles east of Ukraine and about 1,000 miles north of Afghanistan -- Francis made a strong appeal for political leaders to strengthen their commitments to multilateralism and to act in the interests of future generations.

At a time when international agencies are on a high alert over the danger posed by the ongoing fighting around the Zaporizhzhia nuclear power plant in Ukraine, the pope also offered his "deep appreciation" for Kazakhstan's decision following the fall of the Soviet Union to get rid of its nuclear weapons.

Francis' remarks were delivered in the Qazaq Concert Hall, one of scores of ultra-modern buildings that dot the futuristic skyline of this capital city.

In a country with some 550 ethnic groups and over 80 languages, the pope praised Kazakhstan as a "country of encounter," offering an example of diversity and coexistence.

Francis went on to encourage the 70% Muslim-majority country, which is officially secular in its constitution, to double-down in its commitment to the equal treatment of all citizens and the freedom of self-expression.

During his second day in the country, on Sept. 14, Francis will celebrate Mass for an expected 3,000 pilgrims.

With only one percent of the country identifying as Catholic, Francis noted that from ancient times to today, Catholic believers "continue to testify to the spirit of openness and respectful dialogue that distinguishes this land."

During the six-hour flight from Rome, the 85-year-old Francis — who now regularly uses a cane and a wheelchair due to mobility issues — spent just over 20 minutes greeting reporters. Francis was asked if he might also meet during the trip with Chinese President Xi Jinping, who is also expected to visit Kazakhstan on Sept. 14.

While there has never been a meeting between a pope and Chinese president — and Francis said there was no news to report of one on this trip — the pope said he was always willing to go to China to make such a meeting possible.

Once on the ground, he offered a similar version of that message saying "the need to expand the efforts of diplomacy to promote dialogue and encounter thus becomes all the more pressing, since nowadays the problem of one is the problem of all."

"Those who hold greater power in the world have greater responsibility with regard to others, especially those countries most prone to unrest and conflict," he said.