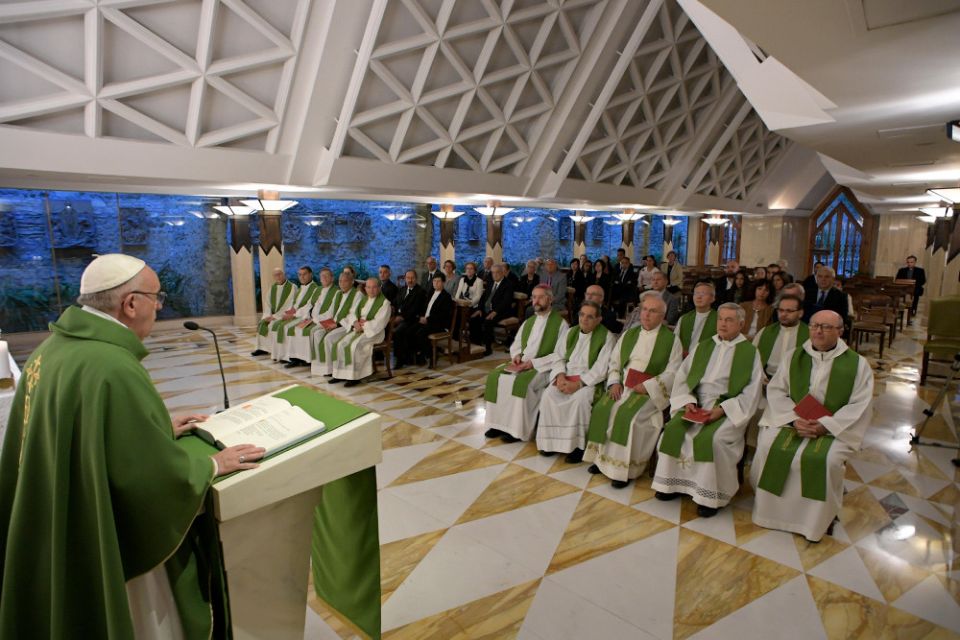 Pope Francis gives the homily during morning Mass Sept. 19 in the chapel of the Domus Sanctae Marthae at the Vatican. (CNS/L'Osservatore Romano)

Vatican City — Celebrating the feast of St. Matthew, the anniversary of the day when as a 17-year-old he said he was overwhelmed by God's mercy, Pope Francis said it was interesting how many Catholics today seem to be scandalized when God shows mercy to someone.

In his homily at Mass in the Domus Sanctae Marthae Sept. 21, Pope Francis looked in depth at the day's short Gospel story of the calling of St. Matthew.

The story, the pope said, has three parts: "the encounter, the celebration and the scandal."

Jesus sees Matthew, a tax collector — "one of those who made the people of Israel pay taxes to give to the Romans, a traitor to his country" — and calls him to follow. Jesus looks at him "lovingly, mercifully" and "the resistance of that man who wanted money, who was a slave to money, falls."

"That man knew he was a sinner," the pope said. "He was liked by no one and even despised." But it was "precisely that awareness of being a sinner that opened the door to Jesus' mercy. He left everything and followed."

In the Gospel story, Matthew celebrates by inviting Jesus for a meal. Pope Francis said it reminded him of what Jesus said in the Gospel of St. Luke, "There will be more joy in heaven over one sinner who repents than over 99 righteous people who have no need of repentance."

But, the pope said, the Pharisees saw Jesus with Matthew and were scandalized that he would eat with tax collectors and sinners.

The Pharisees were people who continually repeated, "The law says this, doctrine says that," the pope said. "But they forgot the first commandment of love and were closed in a cage of sacrifices, (saying), 'We make our sacrifices to God, we keep the Sabbath, we do all we should and so we'll be saved.'"

But, the pope said, "God saves us, Jesus Christ saves us and these men did not understand. They felt secure; they thought salvation came from them."

In the same way today, he said, "we often hear faithful Catholics who see mercy at work and ask, 'Why?'"

There are "many, many, always, even in the church today," the pope said. "They say, 'No, no you can't, it's all clear, they are sinners, we must send them away.'"

But, Pope Francis said, Jesus himself answered them when he said, "I have come not to call the just, but sinners." So, "if you want to be called by Jesus, recognize you are a sinner."

Vatican | Mercy can scandalize those who don't see their own sin, pope says