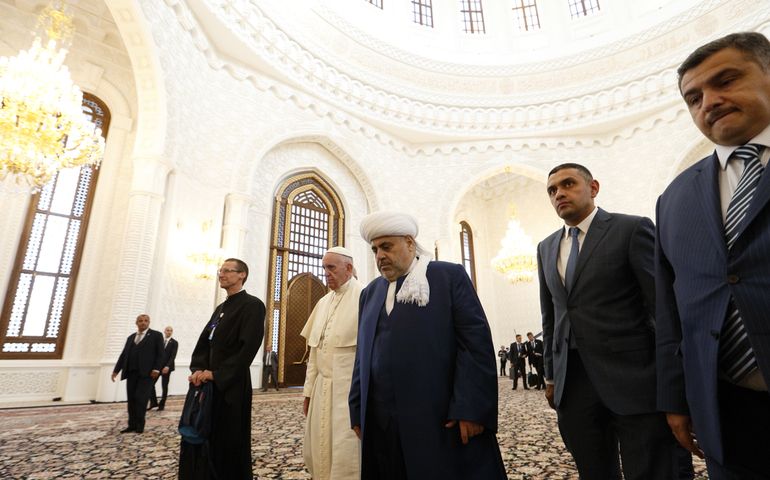 Pope Francis walks with Sheikh Allahshukur Pashazadeh during a meeting with representatives of other religious communities at the Heydar Aliyev Mosque in Baku, Azerbaijan, Oct. 2. (CNS photo/Paul Haring)
This article appears in the Francis in Georgia and Azerbaijan feature series. View the full series.

Baku, Azerbaijan — Pope Francis made a forceful call for Islamic-Christian unity against continuing religious violence on Sunday, saying in a whirlwind 10-hour visit to this majority Muslim Caucasus country that the faiths must work together to "overcome the tragedies of the past and the tensions of the present."

In a meeting with other religious leaders at Baku's Heydar Aliyev Mosque in the afternoon, Francis said the Christian and Islamic faiths should demonstrate together "that it is not opposition but cooperation that helps to build better and more peaceful societies."

"Religions ... are called to build a culture of encounter and peace, based on patience, understanding, and humble, tangible steps," he said. "This is the way a humane society is best served."

The pope then called for the religions to build "a lasting peace, animated by the courage to overcome barriers, to eradicate poverty and injustice, to denounce and put an end to the proliferation of weapons and immoral profiteering on the backs of others."

"The blood of far too many people cries out to God from the earth, our common home," he exhorted, speaking at a lectern just to the side of the mosque's mihrab, or the niche indicating the direction of Mecca.

While several popes have visited mosques around the world, it appeared to be the first time a pontiff had spoken for an event inside one. Normally, such encounters are held outside the religious space in adjoining structures.

Francis is making the visit to Azerbaijan, located off the western shore of the Caspian Sea on Russia's southwest border, after spending two days in neighboring Georgia. Azerbaijan, a former Soviet state of some 9.8 million people, is estimated to be about 98 percent Muslim, with a tiny Catholic community of only a few hundred.

The pontiff was speaking at the interreligious meeting Sunday after hearing a greeting from Sheikh Allahshukur Pashazadeh, the grand mufti of the Caucasus and the country's most prestigious religious leader.

Pashazadeh told Francis that the open atmosphere of the meeting, which also included Russian Orthodox, Lutheran and Jewish leaders, represented "our usual way of life."

"It is a witness to the success obtained in the relations between the various religions in Azerbaijan and their living together," said the sheikh.

Pashazadeh and Francis met privately before the meeting, the Muslim leader giving the pope a short walking tour of the mosque, which was inaugurated in 2014. They exchanged gifts in front of the mihrab, which, like all of the walls in the building, was intricately decorated with raised geometric patterns and soft gold and salmon colored Arabic quotations.

In his remarks at the meeting, the pope called on Muslims and Catholics to be open to one another, quoting 12th-century Persian Muslim poet Nizami Ganjavi's phrase: "If you are human, mix with humans, because people go well with each other."

"Opening ourselves to others does not lead to impoverishment but rather enrichment, because it enables us to be more human: to recognize ourselves as participants in a greater collectivity and to understand our life as a gift for others; to see as the goal, not our own interests, but rather the good of humanity," Francis said.

"Today, we are challenged to give a response that can no longer be put off," he said. "To build together a future of peace.

"Now is not the time for violent or abrupt solutions, but rather an urgent moment to engage in patient processes of reconciliation," he continued.

Upon his arrival in Azerbaijan Sunday morning, Francis celebrated Mass with some of the estimated 570 Catholics in the country at the Church of the Immaculate Conception located at Baku's pastoral center, which is run by the Salesian order.

In his homily, he encouraged Catholics to recognize that faith and service are "intimately linked" and cannot be separated from one another.

"We are not called to serve merely in order to receive a reward, but rather to imitate God, who made himself a servant for our love," said the pope. "Nor are we called to serve only now and again, but to live in serving."

He continued, "Service is thus a way of life; indeed it recapitulates the entire Christian way of life."

At the end of the service, Francis addressed the community briefly in off-the-cuff comments, telling them that while some might think he was "wasting time" by visiting such a small group, the Holy Spirit acted similarly by visiting the first Christians in Jerusalem.

Salesian Fr. Stefan Kormancik, a Slovakian who ministered at the parish for 15 years but recently moved home, said Francis' visit to Azerbaijan was "very important" because the Catholic community exists as an "absolute minority" in the country.

"People will know that we exist, we are there," said Kormancik.

After the Mass Sunday, Francis visited Azerbaijani President Ilham Heydar and other political leaders at the presidential palace. In remarks to the president, the pope praised interreligious cooperation in the country and said their good relations "assume great significance for peaceful coexistence and for peace in the world."

The pope also made a veiled reference to an ongoing conflict between Azerbaijan and its western neighbor Armenia over the territory of Nagorno-Karabakh, which is inside the western half of Azerbaijan but populated mainly by ethnic Armenians.

The two countries fought a war over the territory from 1988 to 1994. Fighting has broken out again several times in the intervening years, including as recently as April.

"I wish to express my heartfelt closeness to those who have had to leave their land and to the many people who suffer the effects of bloody conflicts," said Francis.

"I hope that the international community may be able to offer unfailingly its indispensable help," he continued. "At the same time, in order to initiate a new phase for stable peace in the region, I invite everyone to grasp every opportunity to reach a satisfactory solution."

A much quieter atmosphere than on most papal trips marked Francis’ visit to Azerbaijan. Upon his arrival at Baku's airport, a single line of soldiers greeted the pope and no crowds were present.

Unlike on other trips, the streets leading into the city center remained open to normal traffic and one of the buses in the papal entourage even became slightly delayed due to congestion.